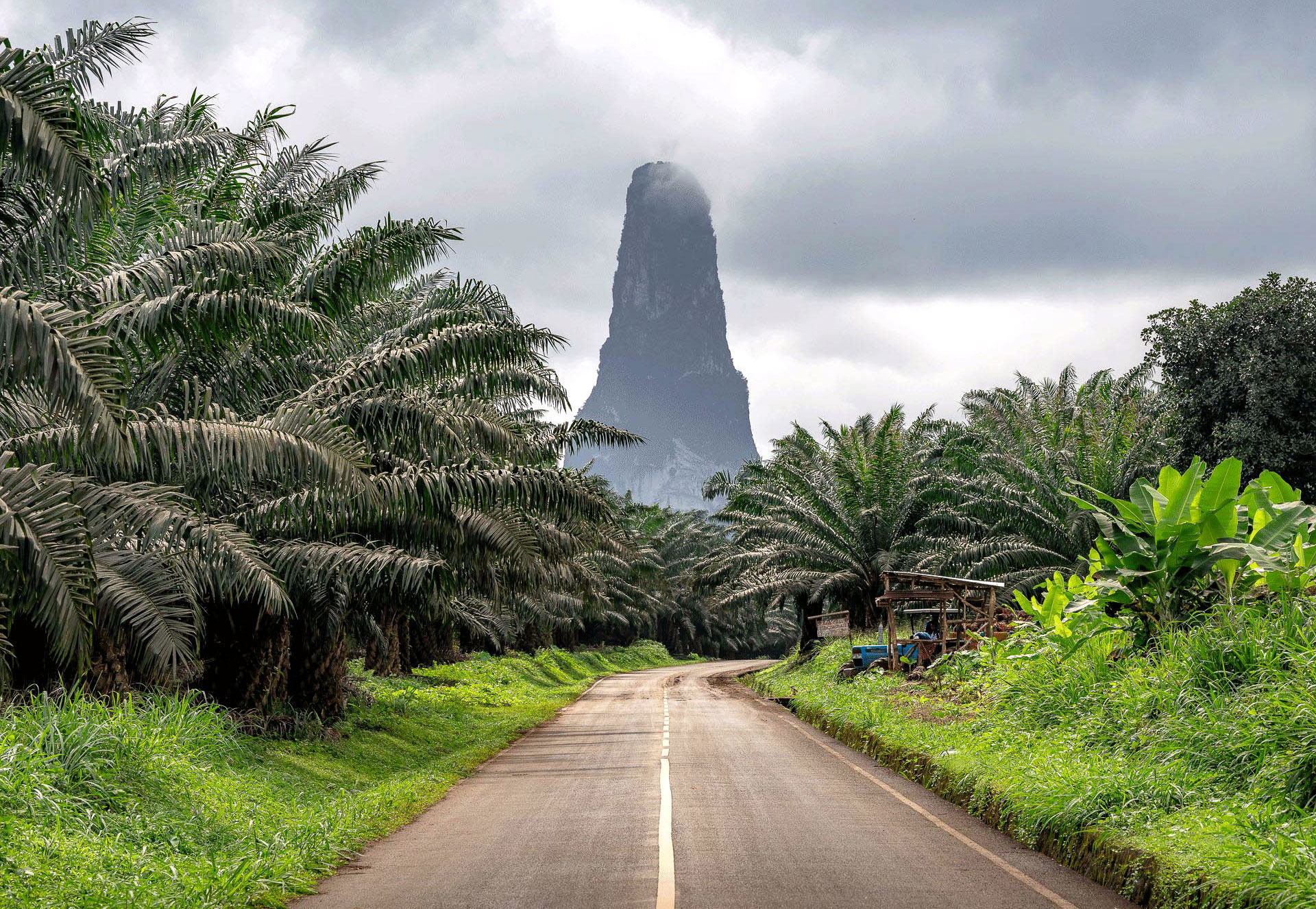 Sao Tome. Wow. What a great little place. We pulled in at around 5pm, without proper charts we had no idea where. It turned out to be a place called Agua-Tzi about halfway down the island. We didn’t want to pull into the capital (also called Sao Tome) as there would have been visas and stamps and paperwork we could have done without – so we sailed into a little bay and anchored down.

The dingy trip to land resulted in me getting my shoes utterly drenched, but AT LAST I was on dry land. It’s taken me three weeks to get here. Three weeks of the paltry 20 I had left of the year. Best not dwell on that, I had given up thinking I would do this thing in a year back in that other ex-Portuguese island, Cape Verde.

Talking of Cape Verde, Sao Tome is EVERYTHING that place isn’t – it’s GREEN (oh so GREEN), it’s beautiful, the people are wonderful, the beaches are clean, deserted and WHITE, the faded colonial architecture still manages to inspire… A tall, narrow volcano stands proud in the middle of the island like something from the Flintstones. It just looks and feels great.

Upon our unorthodox arrival, the locals of Agua-Tzi came racing out to meet us. One guy, Molo, offered to store the dingy in his home, which we accepted, before we headed into the capital for some nosh.

Sao Tome & Principe is really undeveloped, even for African standards. Its population of 193,000 scrapes by with just $25 million of foreign aid and $5 million from cocoa exports. It has no ATMs, no electricity, no sewage system – the fact that all visitors require a visa just beggars belief. Sao Tome needs tourists like George Lucas needs a neck. But unlike Cape Verde, Sao Tome could easily sustain itself – not only is the soil rich and fertile (and, unlike Cape Verde it rains more than once a year) there are oil deposits within the national boundaries. Result!

On top of that, I for one would warmly recommend a holiday here – the miles and miles of palm fringed beaches are ALL YOURS, trekking the lush green interior would fulfil all of your Lost fantasies (except ones involving Sawyer or Kate) and it has a most agreeable climate.

Just a few thousand tourists a year would double this place’s GDP – it currently gets a paltry 20 visitors per week – so I’m making it my mission to help put Sao Tome on the map, especially after we returned to the boat to find that the tide had gone out, marooning the Reol on the beach – and BLESS THEM the locals from the village (led by Molo) had run over to the boat and lifted the outboard motor out of the water to prevent it being damaged. What champs!!

Contrast that with Cape Verde – brown, barren and inhospitable. And that’s just the people.

Sao Tome – you get a massive tick in my book. I like you and I’ll be back.

We waited for the tide to come in, and at about 2am Marc and I pushed the Reol back into the brine. We both got sodden wet, but we made it out. Thank heavens for removable keels.