Graham’s World aka Lonely Planet’s The Odyssey was the eight part television series covering the first 12 months of my record-breaking adventure. It was broadcast around Asia, Australia and South America on NAT GEO ADVENTURE and across the United States on THE TRAVEL CHANNEL.

The series documents The Odyssey Expedition from the very start up to the end of December 2009, and starred little old me, my camcorder and my backpack with a toilet seat strapped to it, bouncing around planet Earth like a wanton loon.

The show was produced by Lonely Planet Television. It was commissioned by National Geographic Adventure and distributed by BBC Worldwide.

I filmed and presented 150 hours of footage for the programme. It’s completely unscripted and ad-libbed, making it the Apocalypse Now of television!!! Kinda. 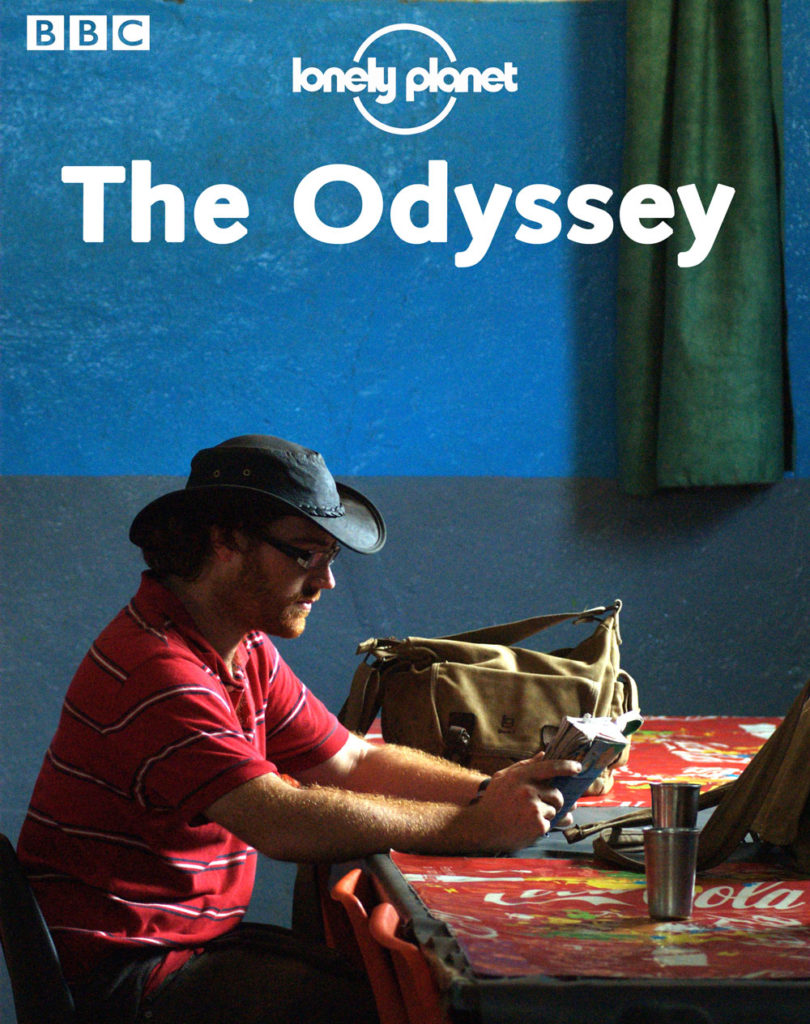 British filmmaker Graham Hughes is taking his love of traveling to the limit, embarking on a record-breaking epic challenge to set foot in every country on Earth in a single year – without flying. Nearly 200 countries and roughly 90,000 kilometers in 365 days, Graham’s World is a logistical nightmare. The opening episode of this eight-part series tracks Graham’s final days of prep in Liverpool, tearful farewells and journey to the starting line in Buenos Aires. On New Years Day Graham launches into a new life of perpetual motion, punctuated by random acts of kindness, lost luggage and roadside tragedies, as he sets out to travel to every country in South America as quickly as he can.

We join Graham in episode two of Graham’s World attempting to navigate the Caribbean by cargo ship and yacht. Haphazard connections wreak havoc with Graham’s schedule but the distractions of snorkelling, cricket and ballroom dancing alleviate his frustration. Hitting dry land in Central America, Graham forges ahead once more before facing his biggest challenge so far gaining entry to Cuba from its long-time adversary, the United States.

In episode three of Grahams World things fall apart when Graham loses valuable time in Florida trying to negotiate his way round the U.S. embargo on travel to Cuba. With time ticking and official permission denied, Graham decides to take the law into his own hands and set sail for Cuba illegally.

In episode four, Graham launches into what looks to be the toughest leg of his journey Africa. Red tape forces him to make a 4,000 kilometre detour as he crosses the Sahara Desert, and in Senegal Graham faces his biggest challenge yet: finding passage to the Cape Verde islands 600 kilometers off the African coast. Time is ticking and he bites the bullet, taking to the high seas in a leaky wooden pirogue. The welcoming party awaiting him is not what he expects.

In episode five, we find Graham under arrest on suspicion of people smuggling on the islands of Cape Verde 600km off the West African coast. Getting out of jail, Grahams resolve and sanity are tested by a month-long search for a boat that can take him back to the African mainland. When hes finally rescued by a European sailor, he hits West Africa in top gear – but can he keep up a punishing schedule when faced with decrepit transport, washed out roads and the rainy season fast approaching?

In episode 6 we join Graham as he tackles central Africa in minimum time and minimal comfort. Kidnap threats, nightmare drivers and hellish roads are just the start of his problems as Graham throws himself into drug-fuelled jungle tribal rituals, sets sail into the Atlantic with a man who doesn’t know one end of a spinnaker from the other, and is thrown in jail and left to rot by Congolese cops convinced that he’s a spy.

In episode seven of Graham’s World we join him deep in Central Africa after his release from a Congolese jail. Shaken but not stirred, Graham faces the threat of being thrown in prison again as he races 1300 kilometres across war-ravaged Angola before his five-day visa expires. Graham downs a pint in the continents highest pub, rocks up to an Angolan house party, celebrates a win at the horse track, and gets chatty with a local lemur as he hightails it across southern Africa and sails through pirate-plagued waters to the islands of Comoros, Madagascar and Mauritius where a lack of sea connections threatens to derail his journey.

Episode eight of Graham’s World finds a frustrated Graham stuck on Comoros off the east coast of Africa with no means of escape. Desperate to add to his tally of countries before the year is out and spurred on by the chance to meet his long-suffering girlfriend Mandy in Cairo on New Years Eve, Graham vows to get back to the mainland, step foot in every country in eastern Africa and meet his beloved at the pyramids before midnight on the final day of the year.