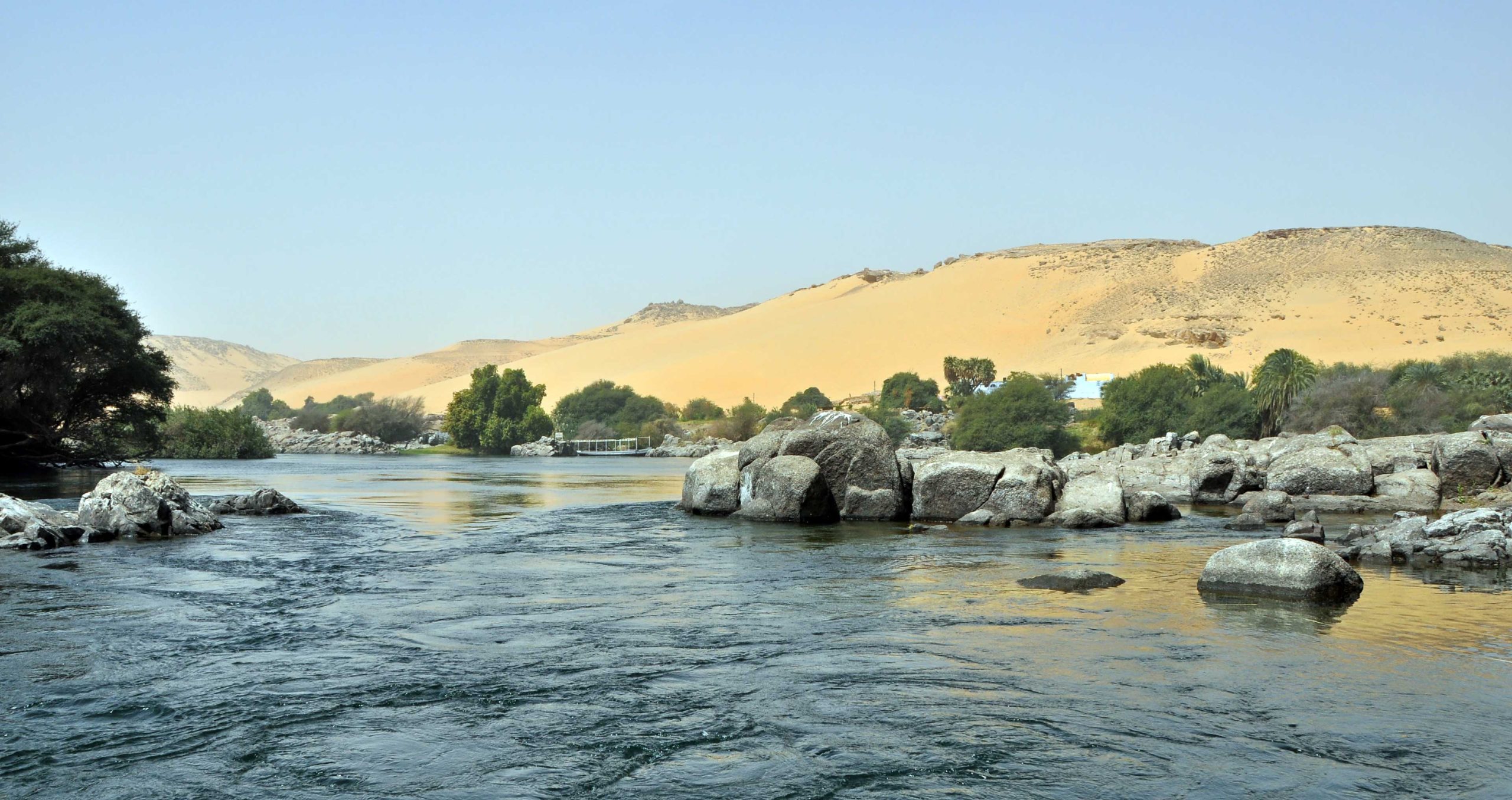 Off the train and then over to the High Dam port. Back in the god-knows-when, the British built a dam at the First Cataract. The First (and subsequent) Cataracts are a series of rapids that are impossible to navigate a boat over. Since you couldn’t sail a ship over the Cataract, it seemed like a good place to plonk a dam – it would allow the Egyptians to better control the yearly floods and provide nice green energy for the nearby homes.

In the 1950s the President of the newly independent Egypt, Mr. Nasser, decided to go one better – he would build The High Dam. So large that it would wind up creating the largest artificial lake in the world, the High Dam was an impressive feat of engineering. However, by flooding the land south of the First Cataract and thereby creating this massive lake (which Nasser humbly named after himself) many archaeological treasures were lost – some temples (including that of Abu Simbel, the famous four-seated Pharaohs in a row all with the face of Ramses II) had to be moved, a painstaking (and risky) operation.

Entire towns were flooded (as was Halfa, the town that is now relocated and renamed Wadi Halfa) and Nubian communities were torn apart. Another problem is that the all-important silt that the river carried (and deposited during the annual floods) was now being prevented from getting to the farmlands that desperately need the nutrient-rich top soil that only the old floodwater could supply.

But as a source of clean, renewable energy, you can’t knock it.

So this lake was what I had to traverse in order to gain access to Sudan, country 134. The road to Sudan had been closed for donkey’s years and this was the only way in or out. Sudan isn’t known for getting on too well with its neighbours. You would think the biggest country in Africa would have bigger fish to fry, but that hasn’t stopped it engaging in border disputes with, well, pretty much all of its neighbours (of which it has many). In fact, the only safe way in or out of Northern Sudan is via Egypt or Ethiopia – you can forget about Uganda, Chad, CAR, Eritrea, DR Congo, Kenya, Libya or Eritrea.

So why didn’t I go via Ethiopia? Good question, well asked. For two reasons: one is that it would have taken me too long to get to Mandy and two is that it can take up to SIX WEEKS to get a Sudanese visa from Addis Ababa. As we discovered yesterday, in Cairo it’s a same-day service. Oh yeah!

The High Dam port was a fit of disorganisation that Egypt is famous for. The whole rigmarole of getting from the ticket booth to the ship took a good hour while my bags were checked on about seven different occasions, and perhaps forty-plus officials who had looked at my passport. Eventually I was on board. The ship was a larger version of many of the little cargo ships that I’ve taken around Africa… benches to sleep on, dirty floors, everything dirty and yucky.

Got chatting with a bloke named Alister Caldicott (www.alitravelstheworld.com), a guy from England who had also done more than his fair share of globe trotting. Having notched up an impressive 90 countries, he had hung out in Palestine, toured through Afghanistan, been everywhere in Burma and was now travelling down through East Africa. He was awesome, very knowledgeable and it was great to actually get some first-hand info on what it is like to travel through places like the ‘Stans.

Ali slept up on the deck, but I had cadged a space down below. Although sleeping under the starry, starry night appealed, I wasn’t too enamoured with the idea of freezing my behind off at five in the morning once the day’s heat had evaporated. I was lucky – I got a bench all to myself. They’re supposed to hold four people each. Good job it’s low season.