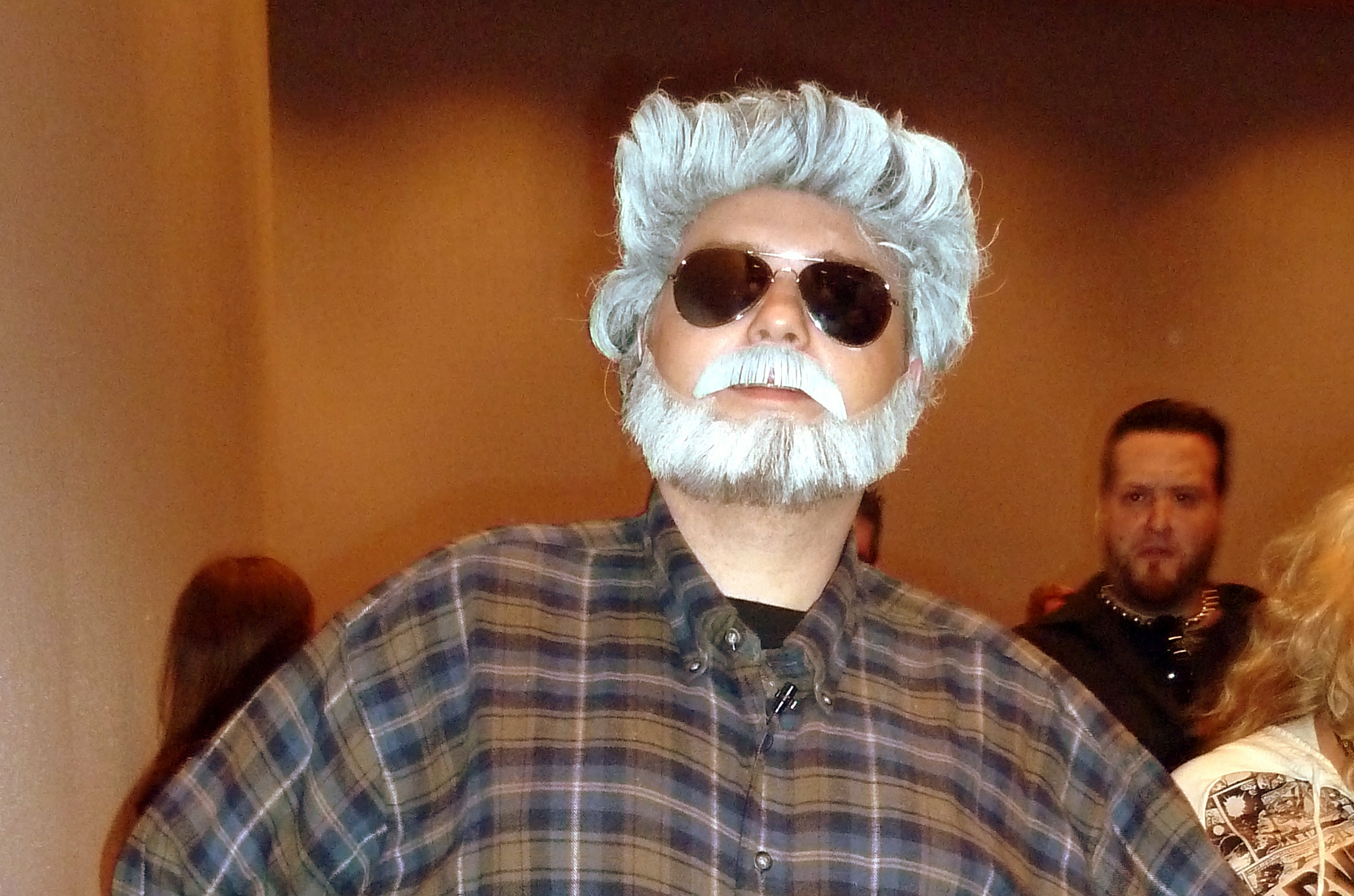 However, given the lack of special effects (ILM were too busy lounging around smoking dope to actually get any done in time) and shoddy dialogue, everybody at the screening said it was a big pile of steaming monkey droppings. Except for one man – Steven Spielberg. Now, in the usual story, it was Spielberg who gave Lucas the confidence he needed to finish the movie.

It was the $9,000,000 contract with Twentieth Century Fox that gave Lucas the confidence to finish the movie. Or maybe it was something else – maybe it was the burning desire to prove them all wrong. This beardy-weirdy 28-year-old had a plan, a vision that he knew would put all the nay-sayers to shame. But the people calling him an idiot made him re-shoot scenes, get the damn special effects in order and – when the film came out – prepare for the worst. They made him justify what he had done.

Now flash-forward a good couple of decades. It’s 1998 and in a screening room in Skywalker Ranch, George Lucas, now the richest, most powerful individual in Hollywood, is showing a rough cut of his new film. A film that everyone in the screening room has been waiting for, for over fifteen years. A wet fish of a film called The Phantom Menace. To everyone’s huge disappointment, it’s a crock of reprocessed felch. But does anyone tell Lucas this? Do they hell. Now the tables are turned – everyone applauds the film. I like to think that one person stood up and said WHY ON EARTH would anyone want to see Darth Vadar as a whiny little sprog? WHY WOULD ANYBODY be interested in a story that revolves around broken spaceship and boring space monks killing boring robots? AND WHAT is with that Jive-Talking Frog?

Ygads Lucas, you’ve lost it – we should have guessed after Return to Oz and Howard The Duck, but man, you need somebody to tell you you’re wrong, otherwise next three films you make (including one bloody awful Indy movie) will be just as bad.

But I somehow doubt anyone had the balls. And anyway, unlike Star Wars – which was a make-or-break affair for Lucas, The Phantom Menace was guaranteed to make a stack of cash at the box office whatever nonsense he conjured up.

Lucas had surrounded himself with people telling him he was a great man. And thus a once great man – the mind behind Darth Vadar and Indiana Jones – had become an idiot.

This theory is nothing new – anyone who watches the excellent television show ‘House’ (and if you don’t, you’re an idiot too) will know that Dr. House follows the Socratic method. He picks three people who will challenge him at every stage of the game. There’s even an episode in which he fires a guy for agreeing with him too often, even when he’s right.

What the hell has this got to do with Africa, Graham?, I hear you ask. Well, it’s this: Pretty much every single African leader surrounds himself with sycophantic lollygaggers who would not dare question a single thing El Presidente wants to do. When there is vocal opposition (most notably in the case of Morgan Tsvangirai), they are usually imprisoned, beaten or shot dead on the beach. The only reason I see that Tsvangirai is still alive is that Zimbabwe does not have a beach. Which means that Africa, by default, is run by a bunch of idiots.

But let’s not just have a pop at Africa – look at America, more specifically, the United States of America. Now Obama’s in charge, yeah, okay, no problem; but when it was Bush… my word, what a twonk. But is there an anti-president? Is there a guy who stands up every week to take the President down a peg or two? A guy who forces the President to justify his actions, play by the rules, stick to his manifesto commitments? Is there hell.

The Americans need to get it through their skulls that they do not elect a President every four years; they elect a King. An absolutist monarch who does not have to justify his actions. A King that has total control of the Army, the Executive, the Legislature and the Judiciary. And who takes over if the King dies? His mate.

Okay Graham, I’ll go with you on the Army and the Executive, but surely there is separation of powers in the US, enshrined in that clunking great toilet roll called The Constitution? I don’t think so. The President can veto any decisions made by Congress. This gives one man the utterly undemocratic ability to stifle any bill that over 600 Congressmen have wasted their time fighting over for months. Now the Queen of Great Britain has the same power, I know, but when was it last used… mmm, yes, I remember… The Scottish Militia Act of 1708, if memory serves me (I was quite young at the time, you understand). A good seventy years before the American Constitution was even dreamt up.

As for the Judiciary, El Presidente gets to CHOOSE THE SUPREME COURT! My word, what? I mean, seriously, WHAT? Okay, so one of the old doffers has to die before El Presidente gets to pick a new one, but crikey, that sounds about as democratic as allowing the President to use the BIGGEST ARMY IN THE WORLD to invade a country for SIX WEEKS before he has to ask permission off anyone but himself.

While I’m at it, what the hell is with The US Senate? Two votes per state, never mind the population or economic output? So California, the sixth biggest economy in the world, 37.7 million people, deserves the same voting power as the three people and the goat that live in Wyoming? Do me a quaver.

Yes I know there is no perfect system of democracy (and why would anyone want that? Referenda are the most undemocratic of devices – whichever side spends the most on advertising invariably wins), but some systems are better than others. I like Dr. House’s way of doing things. I like the British House of Parliament – there’s nothing better than watching Neil Kinnock cock a snook at Maggie Thatcher, William Hague knock the wind out of Tony Blair’s bluster or David Cameron smiling and waving as the great Labour bus trundles unwittingly towards the precipice.

Okay, the leadership of the UK is sometimes taken over by the current leader’s mate (or in the case of Gordon Brown, the leader’s worst enemy), but at least we can do the old backstab and chuck the leader out on their ear if they upset enough people (Thatcher, lest not forget, never lost an election). But El Presidente doesn’t have to worry about that – his position is secure for the next four years no matter what stunts he pulls or how low his approval rating drops (George W. Bush I’m looking at you).

In short, Star Wars Episode One was unforgivably awful and the US Constitution is a crock of rotten bananas, which needs to be torn up and re-written from scratch.

I want somebody to stand up EVERY DAY and call George Lucas, African Leaders and the President of the United States blithering idiots: make them justify their decisions, force them to change their minds if need be or give them the white hot passion they need to prove us wrong – you can’t be a great man – or woman – without it.

Oh, do shut up Graham you sanctimonious troglodyte.

Thanks man, I needed that.