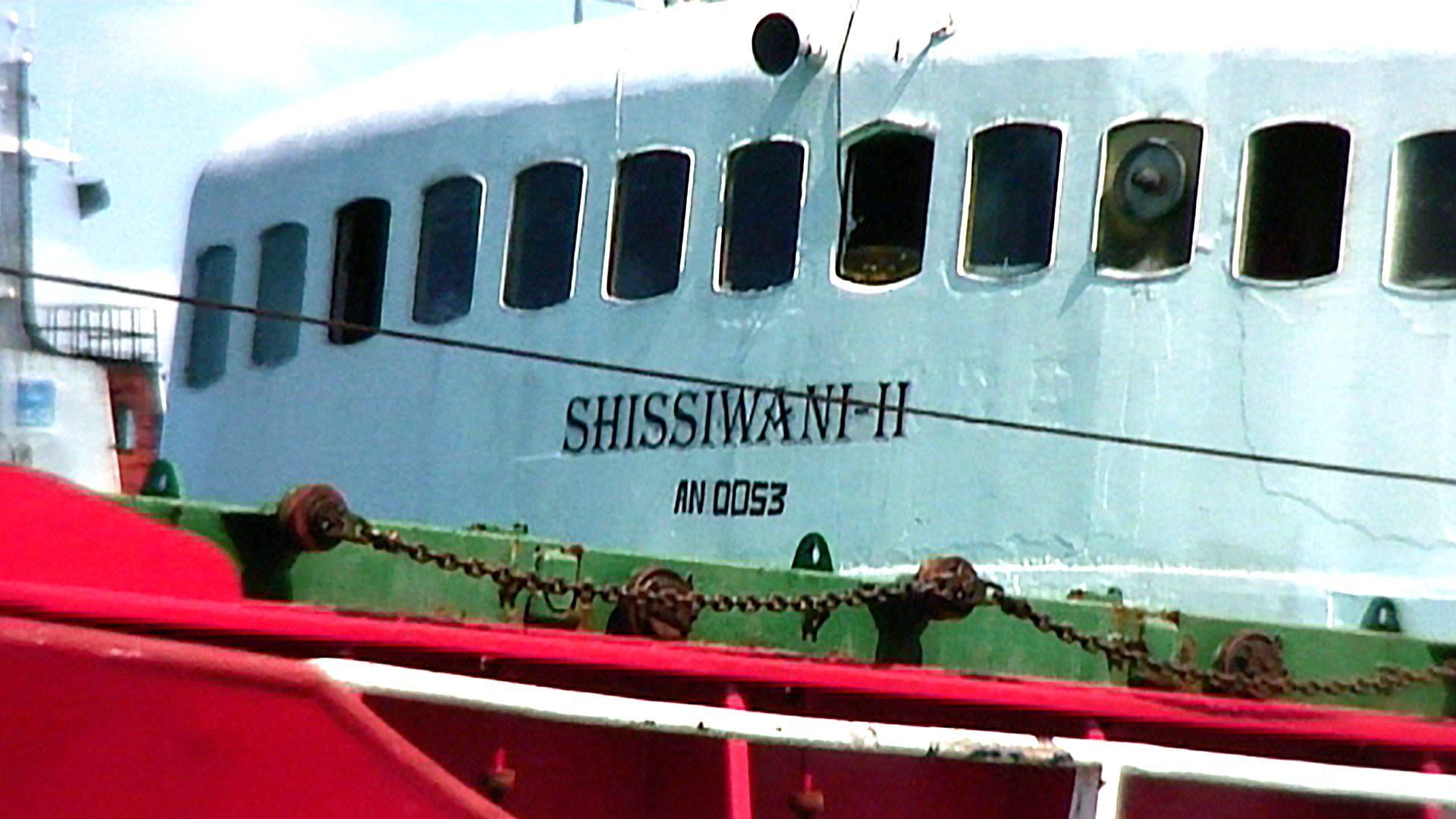 Yesterday was spent creeping around Justine’s apartment like a mouse. I think she’s from Switzerland and I managed to get her to reveal that she worked for the government, but beyond that I drew a blank. I just kept to myself, edited some videos and read my book, trying desperately not to ruffle any feathers.

I whiled away the day writing and editing until it was time to get on the boat – 4pm. I got to the café with the booking agents in the back, and they took me over the road to the port. Only, the Vogon on the gate doesn’t want to let us in. So me and my fellow passengers (there seemed quite a few of them) made do squatting at the side of the road for an hour. Then, and only then, we were allowed into the dock.

There she was – the Shissiwani II. An overloaded mess of a cargo ship. I despaired at the fate of the Shissiwani I. I waited around for a few hours for these damn cows to turn up and in the process, I realised that I was about to run out of videotape. I legged it out of the port to the nearest shopping mall, double-quick-quick because I was terrified that the boat might leave without me.

Ha! Fat chance. By the time I got back (caked in sweat but without tapes, the shop had closed) it was dark. The cows (fifty of ’em!) where being herded around the quay and onto the boat. Figuring we’d be leaving within the hour, I boarded the Shissiwani II and looked around for instructions, advice, anything… nothing doing I headed up the stairs onto the top deck.

Over one hundred people laying cheek to jowl on scraps of foam on top of cargo. The stink, the rotten African feet (I hate feet at the best of times, rotten African feet on a filthy boat is just taking the mick), the squalor was on a scale that I had, as yet, not experienced. Remember the banana boat to Barbados when I had to sleep on the floor in the Galley? Add another 100 passengers on board and you might just get an inkling of what conditions were like on the Shissiwani II. Uncomfortable doesn’t begin to describe. And where was my cabin, eh? No, I had to make do on the floor like the rest of the human cargo. Well that was $225 well spent. I was fuming. Everyone else’s ticket cost them $80, and I bet they felt cheated too.

I told you it was too easy.

A skinny, long haired, snaggle-toothed Chinese guy caught my attention. Lee had left China 12 years ago and was fulfilling his dream of cycling to every country in the world. So far he had been to 140 worldwide, including Somalia. He too had been arrested in Congo without charge, but his embassy sprung him in two days. Maybe our diplomats should learn kung-fu. Lee was a good distraction from the nightmare that was unfolding all around me, but his halitosis began to feel like part of a larger conspiracy to make me hurl.

The filthy bit of foam he was sitting on soon became my bed for the night as he had his rollmat (and his camping gear) slung onto the back of his bike.

When are we going to leave?

It’s just a problem with the passports. We should be gone by midnight.