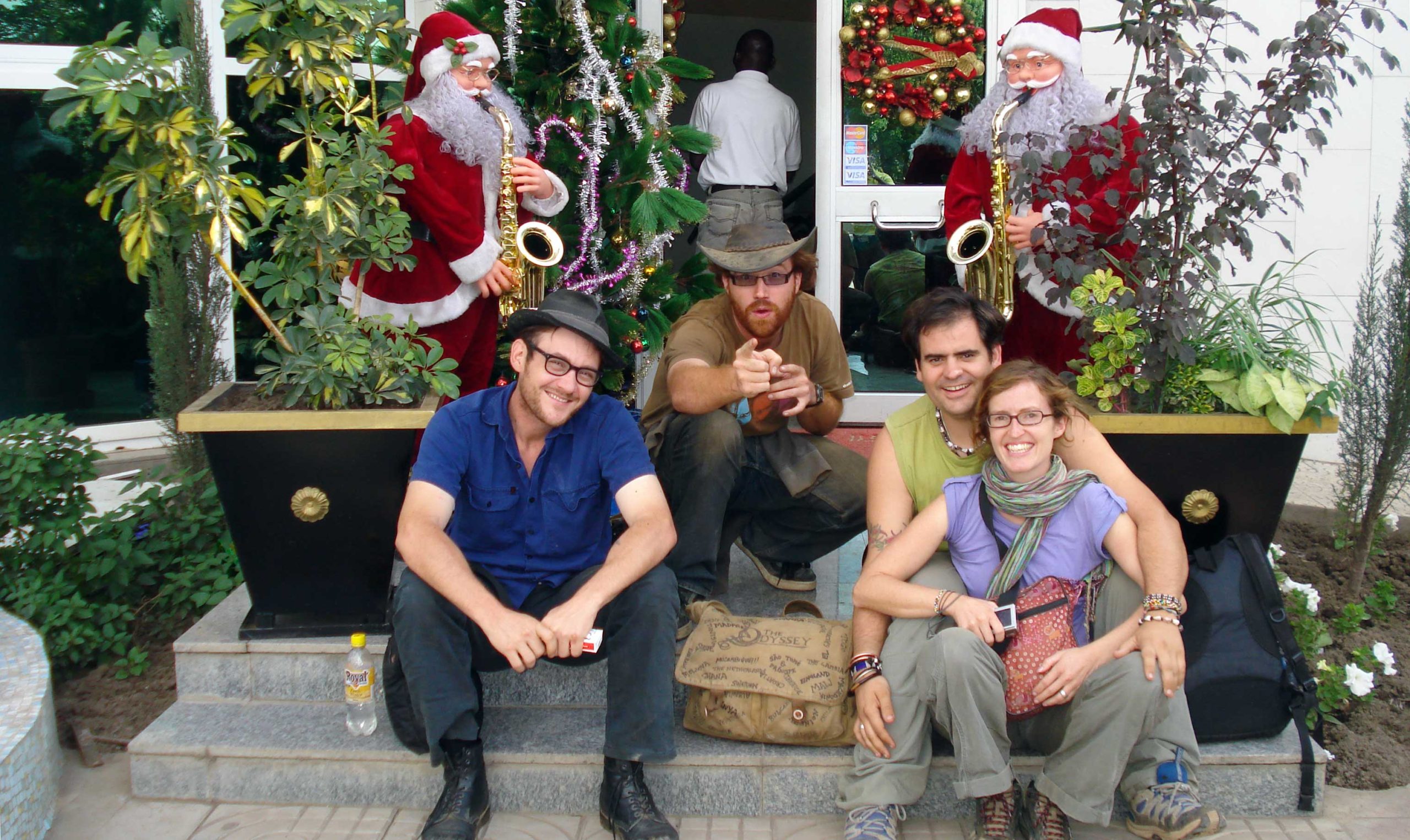 After a good three hours sleep, I left the Dil Hotel to go and get a ticket for Dira Dawa on the ‘luxury’ coach. No chance. Sold out. Although the guy really didn’t need to be such a swine about it, especially at four in the morning. I pegged it back to the hotel to pick up Matt and get the hell to the main bus station before the scuzzy buses sold out as well. We got there at 5am – just in the nick of time, cadging the last two tickets on the bus.

So that’s how I spent Christmas Day 2009, on a bus heading across Ethiopia. Well I spent my 30th birthday on a bus heading down Central America, so I guess I better start getting used to it.

Not that it’s Christmas here. The Ethiopians don’t celebrate the birth of that Jesus chap until January 7th. Looks like a managed to find the only Christian Country for whom 25th December is just another day.

Ethiopia, despite being just as infuriating as everywhere else in Africa, is a class act. The only African country that wasn’t colonised by us dastardly Europeans (so they can’t blame us for all their ills Mugabe-stylee) and as such it’s like nowhere else on Earth. If I parachuted blind into Tanzania and somebody told me I was in Kenya or Uganda, I’d be none the wiser; but Ethiopia is Ethiopia through and through – it couldn’t be anywhere else. Not only has Ethiopia got its own alphabet, religion and traditions; it also has its own calendar and time. This is a bit messed up and difficult to explain, but the short of it is that when everyone else adopted the Gregorian Calendar, the Ethiopians stuck with the Julian so it’s not 2009 here, it’s 2002. I think.

Something else that’s weird is the pernicious meme that’s got about that when you’re on a bus you need to keep all the windows closed lest germs get in and make everyone ill. So even if you’re going to vomit, you can’t open the window, you just have to do it on the floor. Which is what a lot of people do, that is if they can’t find a hapless backpacker to hack their guts out all over instead. This is a particular bugbear of many travellers I’ve met who’ve travelled through Ethiopia, but in a land where 85% of the population is illiterate, it’s a bit hard to persuade them otherwise.

The reason why it’s always Ethiopia that seems to be having famines and not, say, Burkina Faso, is because of the awesome number of farmers here.. Pretty much everybody lives off the land – and while you may think that this leads to some kind of rural idyll (and, yes, the terraced hills are really quite breathtaking) it also means that when there is a drought (every ten years without fail) the economy grinds to a halt (nobody has anything to sell) and people die. The incredible number of people living off the land (100,000,000 people) also means that nobody goes to school. In fact, if everybody in the country attended school up until the age of 16, half of the working population would disappear. Nowhere else on Earth have I seen four-year-olds herding cattle across the road.

The journey to Dira Dawa was okay – Matt bribed some guys for their seats so he could have some leg room and I watched Blackadder on my laptop. The only downer was that in the madness that was yesterday’s minibus to Addis, I lost my Vodafone mobile internet dongle, so updating my website and twitter feed is now impossible. I’ve kept that little gidgit safe and warm for eleven months – it’s such a kicker to lose it now at the end of the year. I’ve got nothing but respect for Vodafone for giving me the thing in the first place – it’s been more useful than a Swiss army knife that purifies water and detects single women.

THANK YOU VODAFONE!! YOU’RE THE BESTEST IN THE WORLDEST!

Dira Dawa was everything that Addis wasn’t; ordered, neat, safe. After arriving around 5pm, we jumped a tuk-tuk (or whatever the hell they call them here) to the ticket office for the bus to Djibouti. All my dreams came true when the chap said that the bus left at midnight. This meant that we should be getting in to Djibouti City the following morning – perfect. Dino had informed me that the ship for Egypt had been delayed, giving me plenty of time to get to Somalia and back before clambering on-board the MV Turquoise like a American leaving Saigon in 1975.

Matt needed some shut-eye (it’s been five days on the road now – it’s understandable) so he checked into the hilariously inept Ras hotel for a few hours kip while I headed over the road to the Triangle Hotel for a few hours booze and internetting. Had a good chat on Skype with my brother Mike and my nephew Joe before packing everything away and rousing Matt for his last bus journey.