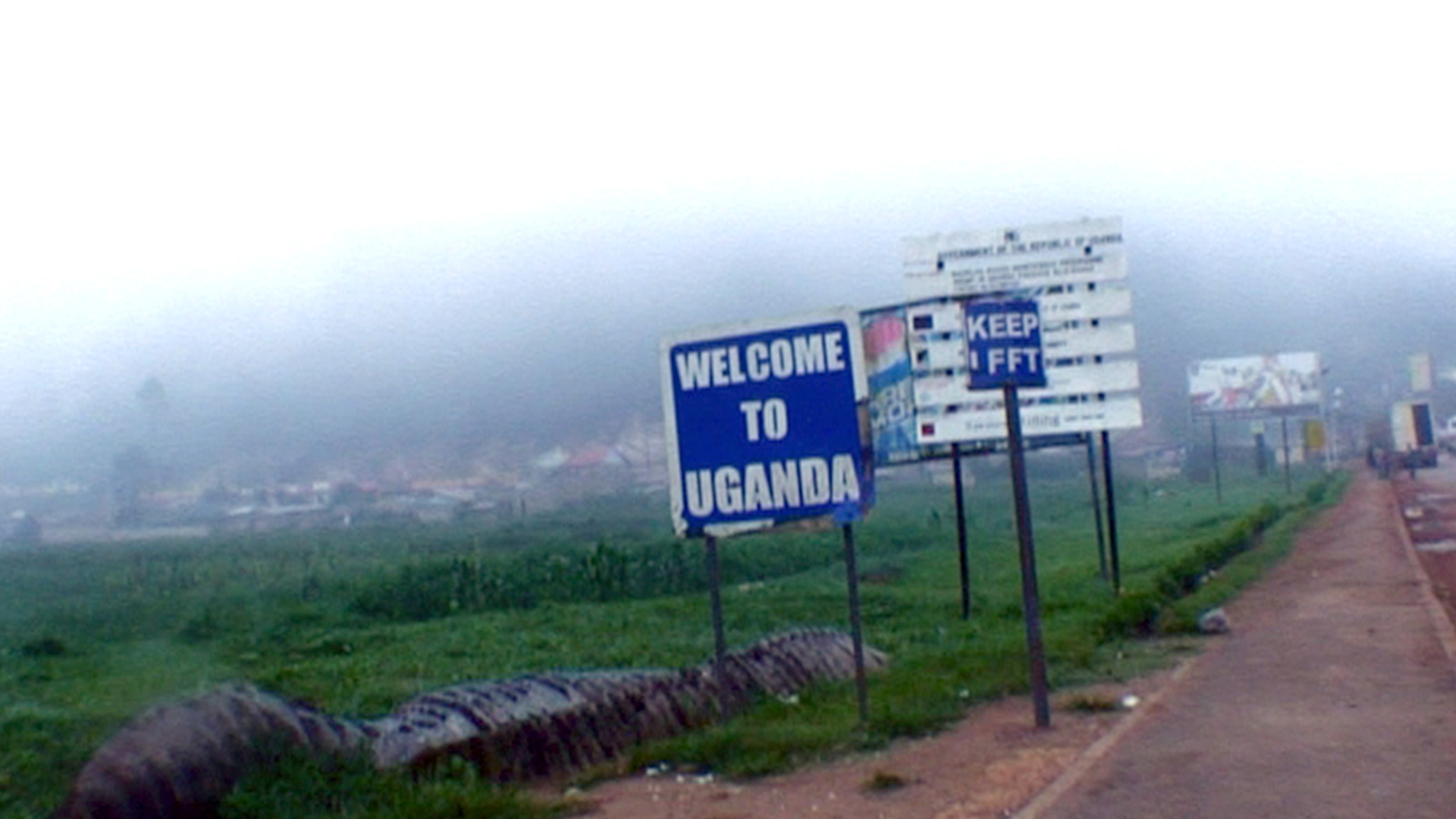 You know when somebody says that something was a breath of fresh air? I can’t describe how apt that saying is when it comes to Rwanda. It is there that you find all that Africa could be if only its leaders would get their act together. Not the best advert for democracy though, President Paul Kagame has been in charge here for the last nine years and he doesn’t look like here’s going anywhere anytime soon. But there’s no time to dilly-dally, I’ve got a mission and a damn good reason to get to Egypt in 11 days time… Mandy.

I hopped a motorbike taxi (and for the first time in Africa, crash helmets are mandatory) to the bus station nice and early and before long I was being whisked out of the country towards Uganda, past the green terraced hills and the cute little villages along the way. Since the darkness of 1994, Rwanda has turned itself around like you would not believe. THAT’S what you can achieve with 15 years of half-decent governance and well-structured aid programmes.

Rwanda shouldn’t really be in this position. Don’t forget, it wasn’t just the 1994 genocide which knocked the country sideways, Rwanda was heavily involved in the conflict in DR Congo which claimed the lives of the most number of people since WWII. It’s also totally landlocked with pretty lousy neighbours (the road from Dar es Salaam to Kigali is still not sealed all the way and you can forget about trucking stuff in from DR Congo – there are no roads!) but, against the odds, they have forged a successful state of which all Rwandans (there are no Tutsi or Hutu any more, only Rwandans) should be proud.

Unlike Uganda which sucked the big one. The border was an ordeal and an utter rip off $50 for a one day transit visa. When you consider that Uganda has only had three leaders since independence back in the 60s (and one of them was Idi Amin) and that the current leader has been in charge since the mid-eighties, you can imagine that this is another place where — to quote the Manics — democracy is an empty lie. Uganda finds itself in the same trap as many other African nations — politicians go for the job for the to line their pockets, not to make things better, the people are nothing more than an inconvenience in the way of the leaders true calling — to skim off a percentage for every bit of oil, gold, diamonds, timber, coltan whatever that is extracted at the behest of the western world with no net gain for the people.

My heart sank as I saw the same skanky shops that line the roads of every country I’ve been through since Morocco. The same shoeless orphans, the same put-upon women carrying the same mosquito-infested buckets of water on their heads, the same grind, the same unfinished concrete hovels, the same the same the same. God it’s depressing. As I’ve said before, I see no romance in poverty. There is no stoic dignity about having to shit in the streets nor seeing half of your children die. The average life expectancy in Uganda is 50. The same that it was in Britain 200 years ago. The gap between the developed the undeveloped is vast and perhaps unimaginable to bridge, but if Rwanda can turn itself around after those dark, dark days of 1994, then there’s a glimmer of hope for the future; if only Africa could rid herself of the gangsters, criminals and thugs that currently run the show.

The mad thing is that these places run by horrible little thieves, bastards and con-men actually get to vote in the UN… on important issues facing the planet, most pertinent this week being action against climate change. That scum like the miserable turd Moussa Dadis Camara, the recently half-assassinated leader of Guinea are allowed to have a say on any matter beggars belief, but on a matter of such complexity and import as the urgently needed cuts to worldwide carbon emissions it just leaves me dumbfounded. It’s like asking Ian Huntley his opinion on the matter, only he murdered considerably less children. Why are these dreadful men allowed to use international democratic institutions when their concept of domestic democracy involves taking out any opposition with a bullet to the head?

If Hitler were around today, would he get a vote in the UN? Looking around the credentials of the current crop of African tin-pot dictators one would have to conclude yes.

So I passed through Kampala in a bit of a grump, but I‘m glad to report that – as usual – the people I met were an utter delight. Incredibly friendly and talkative, and it’s great to see the increasing cross-pollination of the five East African states (Tanzania, Burundi, Rwanda, Uganda & Kenya) in microcosm on the bus. When I have a pop at the state of Africa in 2009, please don’t think for one second that I’m bitching about Africans. I am not. I am bitching about African politicians, who are a breed apart. A breed of psychopaths and sociopaths who don’t deserve the time of day much less a seat in the UN for their twisted cronies and henchmen.

I was a little worried at the Kenyan border that I’d miss the bus as I was last in the queue to get stamped out of Uganda and when I changed my money at the Western Union they took their sweet time about it, so I legged it over the border. Bad call. It was dark and was I really expecting a road in Africa to be, you know, flat? Of course it wasn’t. I went FLYING, scraping my left arm and right hand in the process.

Not an auspicious entry in my 128th Nation I’ve got to say. But an entrance nonetheless and the fact I’ve got to four nations in less than two days is a goddamn miracle. I get into the capital of Kenya, Nairobi, at 5am tomorrow. If I can get my Ethiopia AND Djibouti visas in the morning (unlikely) I should be able to get an overnight bus towards Ethiopia and then I really will be on schedule for the boat to Egypt and what lies beyond.

If not, I’m going to be pushing it, not least because Friday is Christmas Day and things (buses, border posts etc.) might shut down. But then again, if I’m in Ethiopia, no worries – they don’t celebrate Christmas until January!