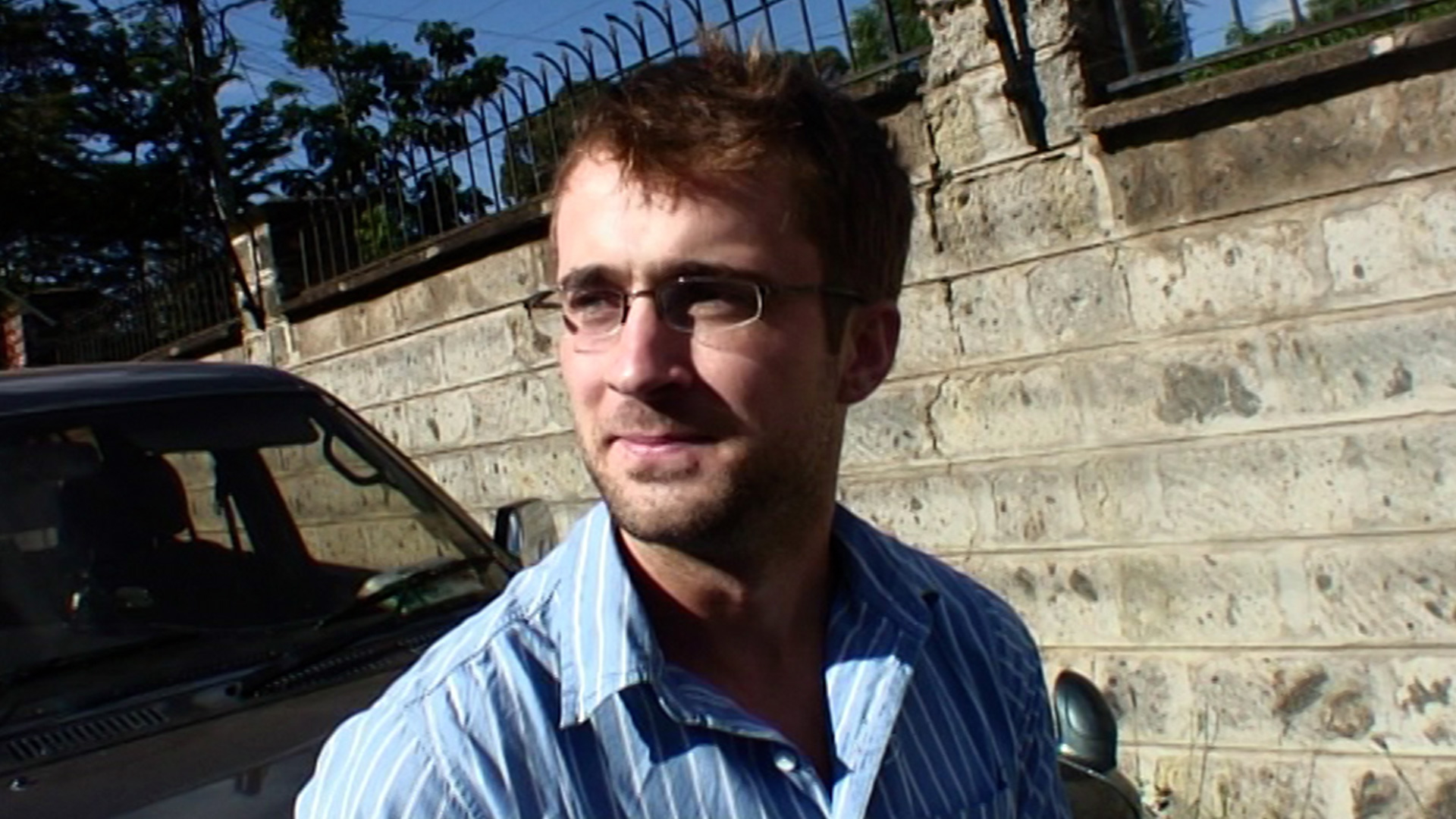 Woke up on the bus, which had come to a halt sometime earlier in downtown Nairobbery. It was 5am as I staggered into a taxi and asked the driver to take me to The Comfort Hotel. There I met Matt, who will be my cameraman for the last 10 days of The Odyssey 2009. Woo!

More good news from the road: The Odyssey TV show (and yes, for us Brits, it will be called The Odyssey) is going to broadcast on the BBC next year, apparently. No obscure cable channels for this little Odysseus. Matt tells me that the Director General of the Beeb has actually seen a chunk of one episode (the Cape Verde shenanigans) and it got the thumbs up. Infamy, here’s I come. BTW, my contract runs out at midnight December 31st, so past that date, ALL YOUR BASE ARE BELONG TO ME! Be prepared for more YouTubey goodness than you can handle BABY…YEAH! Incidentally, if any broadcasters want to commission my 2010 adventures (Odyssey Two), please get in touch.

Matt has a habit of waking me up at some ungodly hour when he calls me from Oz (I don’t think he’s got the hang of time zones yet) so I thoughtfully repaid the favour by turning up at his hotel at such an unreasonable hour. He didn’t seem to mind too much, he was much more excited about the fire that happened last night. The building next door went up in flames – Matt was on the 6th Floor of the Comfort, given T.I.A. he was lucky to get out alive. A guy from Belgium apparently slept through the whole shebang. Luckily, Fireman Sam put out the flames before they engulfed the hotel and it was reopened a few hours later.

After brekkie (I had CEREAL!) it was ACTION STATIONS! I needed to get TWO African visa in just ONE MORNING to stay on schedule for Egypt in 10 days time. Could it be done?

We split up (like on Scooby Doo) – I headed to the Ethiopian Embassy, Matt to the Djibouti Embassy. At the Ethiopian Embassy I met up with Aengus Stanley, top chap from Ireland (who incidently DROVE here from Ireland, the nutter) who had contacted me through the website and had offered his assistance clambering over the obstacles Nairobi would no doubt throw up in our path. I was first into the place, got my form filled in within seconds and handed it over. But this being Africa, you can’t just pay your $20 over the counter, you have to pay it into a nearby bank, get a receipt and bring it back. Actually I had to do something very similar when I arrived in Mexico with Captain Johnny after visiting Cuba.

Aengus heroically drove me over to the bank, I got the receipt, then we rushed across town (as fast as you can rush in Nairobi) and met with Matt at the Djibouti Embassy. Djibouti’s claim to fame is possibly that it is the most obscure country in the world, but in this mad mission, it is utterly key to my nefarious plans. I filled out the form, flashed my passport, said I’ll be back. Matt booked a hotel for next Saturday and printed out my letters of accreditation from LP and WaterAid while Aengus and I high-tailed it back to the Ethiopian Embassy.

They kept us waiting, but only for an hour (which given T.I.A. Is lightning fast) and – oh yeah -that was one visa in the bag. Then Aengus took me back to the Djibouti Embassy, we said our goodbyes and I headed up the second floor of International House behind the Hilton Hotel to drop in my passport for Djibouti.

Come back in an hour said the girl on the front desk.

I could have kissed her.

Matt and I grabbed a coffee and had a smashing row about mmmmm mmmmmm and the mmm mmm mmmmmmms before heading back to grab our visas. We were DONE and it wasn’t even 1pm. Oh yeah.

The bus for the border was apparently leaving at 4pm. I’ve been here for seven months now so there was no way I was going to hurry for this one and I guess Matt learned his first lesson about Africa – trust no-one. Especially bus or taxi touts. We didn’t actually leave until 7.30pm. This annoyed somewhat, not because of the added journey time (according to Aengus, the roads in Ethiopia are much better than they say in Lonely Planet, so we should save time there) but because if we had known the bus wouldn’t leave until that time, we could have gone to Carnivore, the famous stuff-your-face-with-more-meat-than-Linda-Lovelace restaurant that everybody raves about. It was the only thing I really wanted to do in Kenya, but ho-hum.

The place where the ‘bus’ (it was minibus) left from was as grotty as hell. The road was stacked high with trash, the buildings were concrete hovels held together with bubble gum and dirty shoeless street urchins begged for coins. I’m beginning to think Rwanda was just some fanciful dream. But it wasn’t. All Rwanda shows that it is possible for Africa, all of Africa, to dig itself out of the mess it’s currently in. It just needs good leaders, good governance and the political will. Why isn’t there a UN Charter of Good Governance?

Stepping off my soap box for a moment, it was dark when we left and after fluking my way through two of the unholy trinity of ‘worst cities in Africa’ (Lagos and Johannesburg) I wasn’t relishing the thought of being done over just because the bus was so late leaving. But not to worry, we made it out of Nairobbery in one piece with all our swag intact.

Sleeping on a minibus is tricky at the best of times (although I’ve had a lot of practice this year) but my word this one was a nightmare – the road was dreadful, utterly dreadful, and the driver had a nasty habit of slamming on the brakes at any given opportunity. This, don’t forget, is the main highway from the capital city up to Ethiopia and it’s made from rocks, dust and decades of human misery. Madness. Sheer madness. Aegnus told me that he got all the way from Ireland to the Kenyan border without a hitch and then from the border down to Nairobi he suffered three separate punctures.

Will we get up to the border without a hitch? I doubt it, but at least today I had a undoubtedly very successful day’s Odysseying.