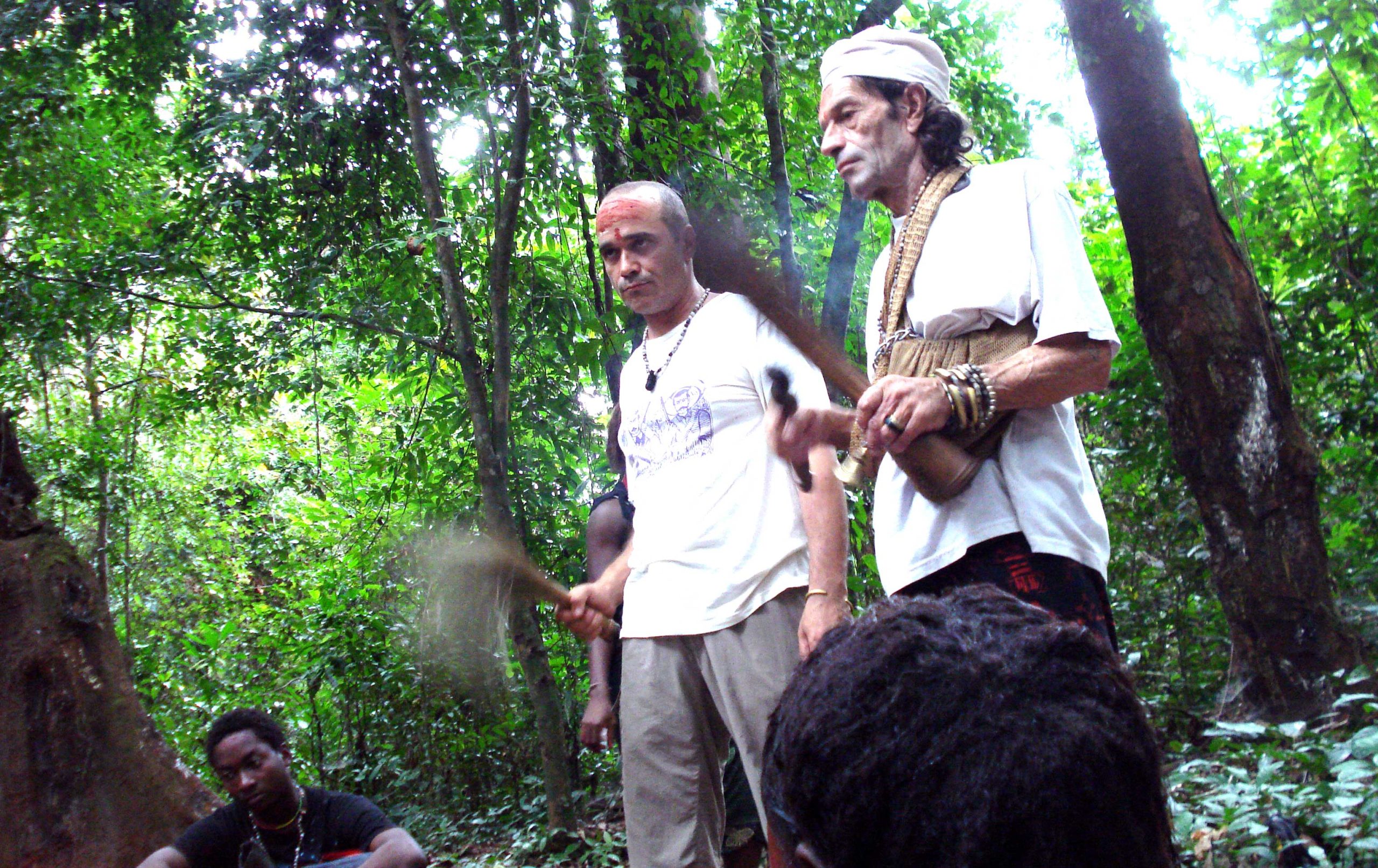 Oo eck – Election Day! So here’s the situation – Omar Bongo, the former longest standing African president (since 1967 no less!) died a couple of months ago, so the tiny oil-rich nation of Gabon (population 1.4 million, 800,000 registered to vote) has its first chance in over four decades to choose a leader that might not turn the country upside down by its ankles and shake it until all its money falls out of its pockets.

Although the pickings are somewhat slim. Out of the 23 candidates running for the post of El Presidente (a simple majority is all they need to win – ie. The winning candidate could get 10% of the vote) there are only three front runners, Ali Bongo, Omar’s son and heir to his utterly IMMENSE personal fortune (we’re talking BILLONS baby, BILLIONS) some guy who’s a bit of a crook called Obame, and some other dude who might actually change Gabon for the better, redistribute a LITTLE bit of Gabon’s Scrooge-McDuck-Swimming-In-Gold-Coins-Esque wealth to the tiny, impoverished population. Unfortunately for Gabon, I can’t even remember that guys name, so I doubt he’s got much of a chance.

Ali Bongo is EVERYWHERE. Hell, he can afford to be, his father having fleeced this country of every single penny for the past forty years (when he died he was one of the richest guys on the planet, most people here live on less than a dollar a day). Every single lamppost (working or not) has Ali’s face posted on it, giant TV Screens beam his mug all over Libreville like some Orwellian nightmare, entire building have his immense posters down one side: T-Shirts, Badgers, Pens, Lanyards, Baseball Caps, Skirts (yes, skirts) you name it baby – Ali’9 is there. It would have been cheaper just to bribe the 300,000 people he needs to vote for him with free gummy bears for life.

Not that he isn’t going to win. He’s the bloomin’ defence minister! He controls the army. He’s got it in the bag even if nobody votes for him. This is Africa – they don’t have elections, they have coronations and coup d’états. One crook for another, here to rob everybody blind and then turn up at the UN bleating about how the West should help Africa more. Yeah, we should help all right – first we lock up all the frickin’ leaders!! We’ve got Charles Taylor in the Hague for crimes against humanity – that’s one down, 52 to go…

And before you say it, PLEASE MY FRIENDS – there is NO comparison with the West here – George Bush, Jacques Chirac, Silvio Berlusconi – I’m sure they’re all nasty little crooks too, but my word, they don’t rule over horrifically impoverished nations while at the same time owning more assets than the Queen of England, Bono and the Pope put together.

Anyway, as I was saying… there’s an election today so Tatayo, Mobengo, Justin, Alex and the Bwiti brat pack headed off to the jungle. We went to gather leaves and herbs for Justin’s upcoming initiation ceremony, and to introduce him to the spirits of the forest.

Now for a brief word about Bwiti. Bwiti is the third main religion of Gabon, after boring old Christianity and Islam. It’s also the most fun (by far!). It’s based around Iboga – a tree root with hallucinogenic qualities. Usually you will eat a handful in a night, see some crazy stuff and stay up dancing and playing drums. If you’re getting initiated however, you have to eat the stuff til you puke. And then you eat some more. And more. And more. If you really really can’t go on, they might even put some up your bum. Seriously.

Then comes an elaborate dance staged by the entire village designed to freak you the hell out (in a loving way!) so that your consciousness leaves your body and you go for a trip around the universe, have a moment of looking into the Total Perspective Vortex, get all funky with the spirits of your ancestors and puke a little more.

I’m well up for it, but I don’t have time – it takes a week of preparation and then you can expect a three day hangover. But there is more to Bwiti and Iboga than psychedelic flights of fancy – your rational host here has no time for conversing with the dead or going on a trip to dimensions beyond the scope of his already going-at-100mph little mind. The dead are dead and I wish to leave them that way. What I am interested in is Ibogaine – a chemical compound found in Iboga (banned in the US, but not in Britain, pop-pickers!) – which, amongst other interesting medicinal benefits, is known to help wean addicts off Bayer’s finest opium derivative, heroin.

More about that later, my friends – Afghanistan awaits…

So today we introduced Justin to the forest, and MY GIDDY AUNT was I glad to be out of the damn city and walking through the glorious woodlands. Okay, the giant spiders where somewhat irksome to an avowed Arachnophobe such as me (a phobia not without merits, I’ll have you know) but the sweet smell of the trees and the leaves and the woodland air, you can’t beat it. Justin got covered in mud and leaves, washed in a river and then covered in some more mud and leaves.

Although everything was done textbook Bwiti style, Tatayo is of the (glorious) opinion that the ancestors are up for a laugh as much as anyone and so fun and games are always welcome (along with random cries of “**** the Pope!”). Had a great time trekking, taking some more Iboga, chatting up a pair of rather fetching trees…

Now my personal drugs policy is this: Prohibition has never, will never and can never work. The damn things should be re-legalised as things were before the 1960s. This should be done YESTERDAY: too many people die in the process of getting the crap from South America or Central Asia up the noses and into the arms of my least favourite rock n’ rollers.

Having said that, I am always mildly offended when people snort cocaine in my presence. Why? Because drug taking is borne of one thing: boredom. If you can’t have a great night out without a line of the white stuff, please – look at your partner, look at your friends – they’re probably boring as hell! You’re standing in an oh-god-they-all-look-the-bloody-same bar, the music is too loud to speak and even if you could the conversation would no doubt centre on bleeeeeedin’ house prices or something equally as DULL. Crikey, no wonder so many people choose to ‘self-medicate’ (a lame excuse, but hey-ho). I wonder if you could chart on a graph peoples drug use against the amount of time they spend with Nigel from accounts.

The only advice I can offer is the same as I gave Dino when he objected to the fact I took the last beer without asking when we were in Australia last year: GET BETTER MATES.

In the meantime I don’t break the (insidiously ridiculous) law when it comes to drugs: two reasons – one, I find my mates ludicrously interesting and entertaining; two, I don’t want to help pay for some kid to buy a gun. When the governments of the world FINALLY see sense and legalise the damn things I will bake a pot cake the size of a hot air balloon and feed it to the delegates of the UN so they can spend the flight back home from New York giggling like a bunch of Japanese schoolgirls.

We got back to Tatayo’s pad in the afternoon, and not long after my phone beeped Text Message Received.

Tentatively I pressed Open. The text listed a few good reasons why he couldn’t go to Sao Tome.

I was devastated. The damn Andrea will not be leaving before doomsday and Marc really was my last throw of the die. It’s a good job that I was at Tatayo’s – if I was on my own I probably would have had a little cry.

I just want to get ON WITH THIS. I’ve got another 93 countries to visit before I can chill out on the couch, put my feet up, wrap my beautiful girlfriend Mandy in my loving arms and watch the last season of Lost together. I don’t want to be doing this for another six months. I will if I have to, I’ll do whatever it takes, but blimey I would like to have spent Christmas and New Year with my friends and family in either the UK or Australia.

At this rate, I’ll be lucky to be hitting China.