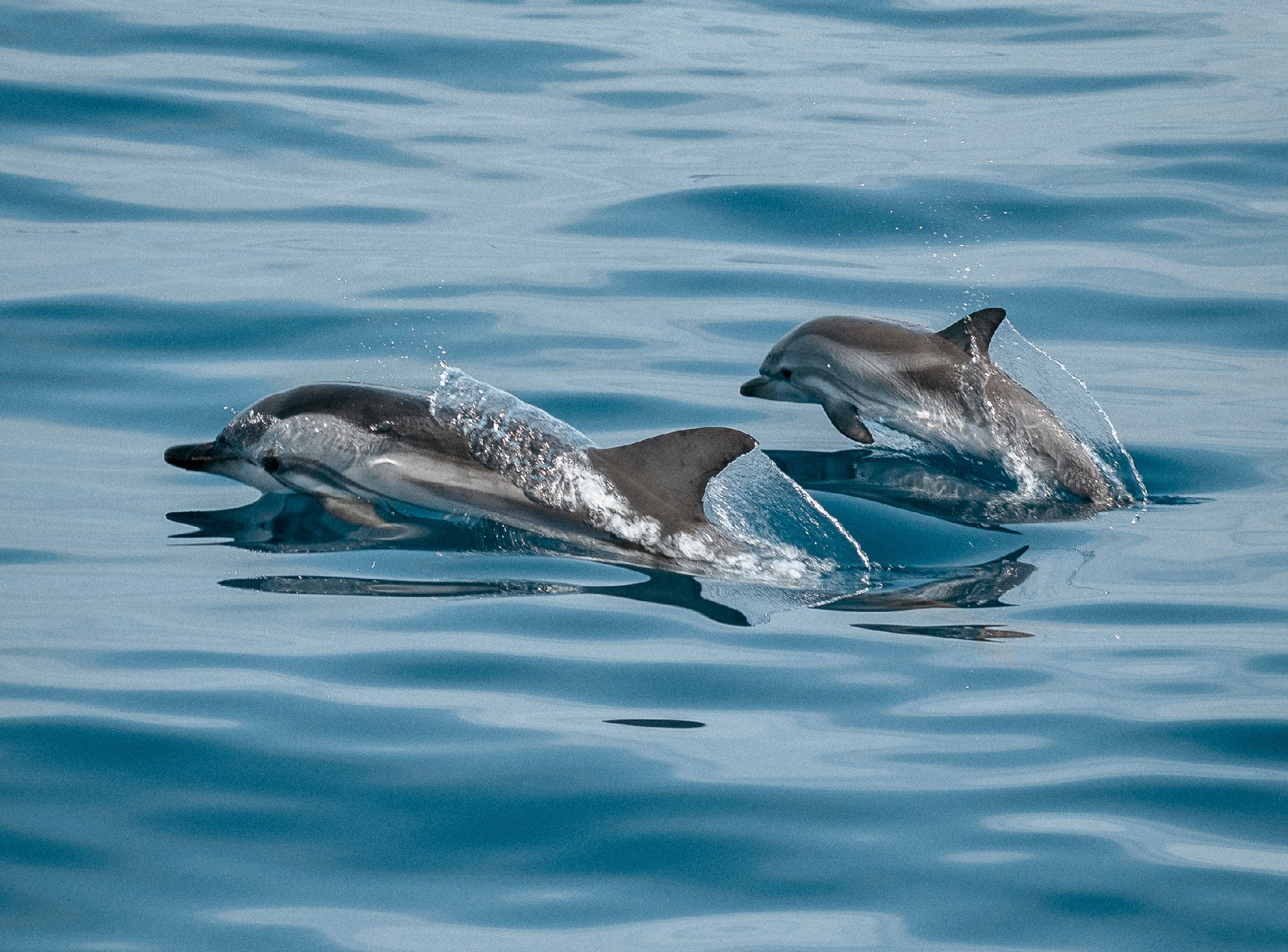 Wow! I can honestly say that I have never seen anything like this before. There was not one iota of a smidgin of a skerrick of a sub-atomic particle of a whisper of a wind. The sea was as flat as it could be – more like a lake than the second biggest ocean in the world. There were no waves at all – just a swell bobbing us up and down, but that was little more than moving sand-dunes.

In fact, it occurred to me that the sea is not that different from the desert. Nothing to drink, the sun bearing down on you, no shade, no trees, no escape. Just a vast undulating landscape. Food can be found, but you need specialised equipment to catch it.

We had no specialised equipment. Just a plastic line in the water with a fake fish strapped to the end of it which didn’t interest the fish a sot. That’s not to say we didn’t have any aquatic activity. A giant Manta Ray turned up during the course of the proceedings, accompanied (some might say showing off) by a handful of brightly coloured pilot fish, the arguably smartest fish of Neptune’s realm – they stay out of trouble by hanging with the bigger kids.

Ray Charles, as I christened the ray, hung about for a couple of hours, gracefully flapping its wide delta wings and reminding me of Starfox, one of the best games on the Super Nintendo, which in turn reminded me of Super Mario Kart. How I wish I had brought my Gameboy! How I yearn to crash over the line of the Rainbow Road, coming first by the skin of Toad’s teeth (Toad is always the best, like Blanca in Street Fighter II). After finishing ‘On The Beach’ (hate to spoil the ending but THEY ALL DIE), Milan’s portable electronic chess game became more addictive than crack, especially since it was diabolically easy to beat, even on the hardest level.

Note to designers of electronic chess games: don’t be so eager to Castle. It’s a fun move, but if you’re going to leave your poor little king imprisoned in the corner behind your pawns, I will eat him for breakfast.

One other, more attractive, aspect that the sea shares with the desert is the plethora of stars that pepper the night sky. You have never seen so many. From this latitude (about 15 degrees North), you can see both the North Star and the Southern Cross WHICH ROCKS MY WORLD. Orion has gone off hunting for the summer leaving Scorpius as the most startling constellation in the heavens. One of the few star groups that actually looks like what it’s called, the great Scorpion balanced on his curving tail marked the passage south. We needed to keep the wee beastie to the right side of the boat if we were to reach Dakar.

Whenever that shall be…

We did pick up a little bit of wind last night, but today was another long trudge. In the afternoon, we picked up a little speed (along with some dolphins) but by the evening that dropped off (along with the dolphins). We hoped to be in Dakar tonight. We were still 300 miles away.

Excitement was to be had just as the sun was going down when we spotted not one, not two but FIVE blue whales coming to have a mosey at our boat. And what a fine boat it is – the Fleumel, named after Milan’s daughter’s nickname, is an all metal affair (quite a rarity in the world of sailing) with a keel (the bit that pokes out of the bottom) you can pull up for shallow water. This has led Milan to believe (after watching Fitzcarraldo) that he can sail it up the Amazon. I’m willing to take that bet and go one further – in the next few years, I intended to produce a television show which involve travelling along the Amazon, so if he’s up for it, so am I.

But what a commotion was caused by cetacean friends! Milan jumped up and started banging a stick on the metal rail as hard and as fast as he could.

We don’t want them to mate with us!!

After seeing the size of these leviathans, I was willing to agree. Fleumel wouldn’t stand a chance. It would be like Pavarotti trying to mate with a hamster. But it was okay, they seemed to be a family and were just passing by, fellow travellers on the same wibbly-wobbly road of bizarre and improbable blue.

Looking at the admiralty charts, we were now floating four kilometres above from the ocean floor. Crikey – it’s a long way down.

I have never seen so many. Our mammalian cousins from yesterday had returned and this time they had brought re-enforcements. I slipped off my shoes and socks and dangled my legs off the prow of the ship as dozens of the playful tykes danced about in the water below. I agree with Douglas Adams – these guys are SMART. Very smart. While we were coming back out of the trees, their great matriarch thought it would be a good idea to return to the water. While we strive all day working, fighting, checking our emails, watching X-Factor, doing each other over, worrying about paying the mortgage and building remarkably ugly buildings, they just spend all day splashing about in the water having a good time.

They are big enough to have no real predators, and travel in large numbers just in case any sharks are on the prowl. They can communicate, chat about stuff and if they’re hungry, they just open their mouths. Brilliant!

And we still think opposable thumbs are pretty neat. Gah!

Anyway, the dolphins stayed with us for a number of hours, jumping in and out of the water, some doing tricks, not for a fishy SeaWorld treat, but just for the hell of it. It was great. As for the wind, today it was on our side and we covered some distance. Hopefully we’ll be in Dakar on Friday.

Just when we thought we were making good time, we go and get stuck in the Doldrums. Not the real Doldrums – they are a few hundred miles south of us, but the Cape Verde Doldrums. Cape Verde’s last laugh. Milan had checked the long range forecast before we left and it promised a steady, northerly wind all the way to Africa. Somebody presumably forgot to tell the God of the North wind about this arrangement – where’s Black Elk when you need him?

The time had come to get the cards out and teach Sebastian the best card game in the world – S–thead. If you’ve never heard of it, you’ve never been backpacking. Like a gypsy curse or a Masonic handshake, the rules of S–thead have been passed down through generations of footloose long-haired types waiting in foreign train stations, bus shelters and the like.

Like Super Mario Kart, to win S–thead takes a bit of talent, a good memory and a fair dollop of blind luck. The genius is that the blind luck part comes at the very end of the game, which can make all of your previous cunning stunts amount to nada. It’s a great game and very soon Sebastian was hooked. Which was good, as we were both tired of beating the electronic chess game.

That evening, Sebastian made sweet popcorn for us all. He used butter in the pan so it was salty sweet, but it was still more super than Superman shouting Superlatives whilst playing Super Mario on his Super Nintendo. Milan and Sebasian had a couple of beers, but I opted not to join them, on the grounds that the beer was warm (we had no refrigeration) and it would probably make me call Hughie off the side.