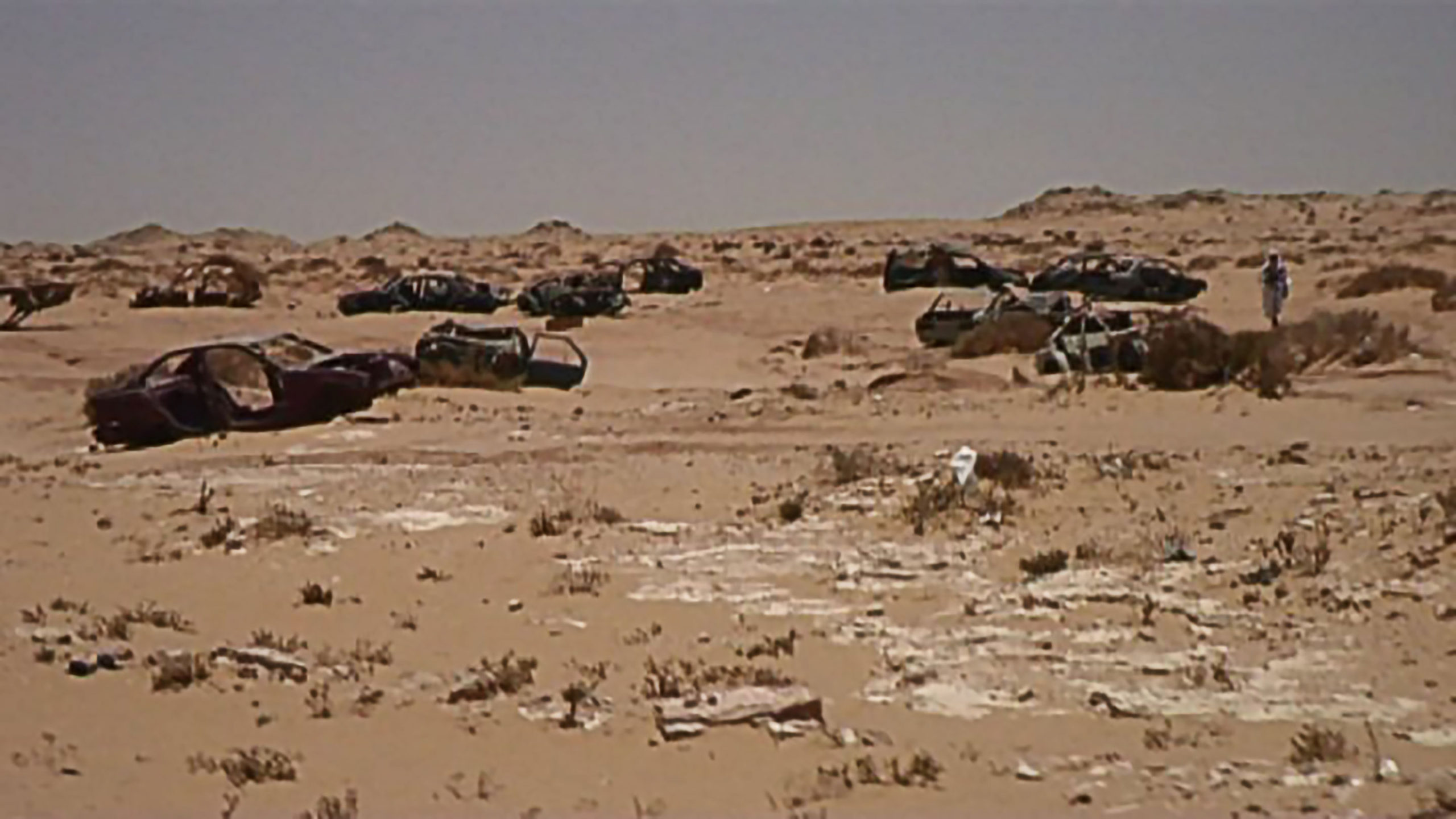 Yawning and creaking, I staggered off the bus. It was still dark in Dahkla. After a particularly weird conversation involving the local police and a desert taxi driver (implying I would have to wait three days for a shared taxi to the border), I parted with 130 Euro [CHINNNNG! See those gold rings fly!] to hire all six places in the desert taxi.

It’s four hours drive to the border, so I kinda justified the cost – there is no real public transport, it’s shared taxi or nothing, and if you ain’t got nobody to share…

Only (I found out later) I think the cop meant that I would have to wait three hours, not three days. Heures and Jours aside, it was a looooooong trip. Then I had to wait in the baking sun OF THE SAHARA DESERT NO LESS for an hour to get my stamp out (oooooh, they love taking their merry time about things, don’t they, border guards?). There is 3km of MINED no-mans land between the two borders (keep to the track!) and so I hitched a lift in an oil truck through the barren, littered track that joins the two countries (who haven’t seen eye-to-eye since Morocco’s great land grab of 1975) – we CRAWLED at 4kph.

Finally… dirty, sweating and tired… I get to the Mauritanian border.

In my 2006 edition of Lonely Planet West Africa it clearly states… you can get your visa on the border.

In my 2007 edition of Lonely Planet Africa it clearly states… you can get your visa on the border.

I checked this on the internet last November, before I left… you can get your visa on the border.

No. Not here. Rabat.

WHAT? The desert SHOOK from the barrage of expletives that issued forth.

Rabat is 2000 kilometres away.

A shrug…”the rules have changed. Here are all the people I have turned back…” – a list of perhaps a hundred or so names, passport numbers. Smug. Ha ha silly westerners cannot break into Africa.

I try to bribe him, but he’s not shiftin’.

Sorry, Mauritania, did I miss something here? Let’s get this straight… YOU ARE ONE OF THE POOREST COUNTRIES IN THE WORLD. Over 90% of your population live on less than a dollar a day. I (thank my lucky stars) come from the FIFTH richest. I have a wad of dollars in my pocket ready to spend on your transport, your food and your accommodation – AND YOU WON’T LET ME IN. Instead, that money is going to be spent in MOROCCO – you know, those ne’erdowells that ‘STOLE’ Western Sahara from you.

Africa already reminds me of the joke about the man who asks God if he can win the lottery; God agrees, but after three weeks go by without a win, the man asks, what gives? God suggests that it might help if the man went out and bought a ticket.

I turned around and headed back over no-man’s-land. This is the ONLY viable overland route into Sub-Saharan Africa. I had no choice.

I got a shared taxi back to Dakhla. I had to share the front seat with this guy who had NO volume control and an amazingly irritating Peter Lorre-like voice. Christ, I have never wanted to throw somebody out of a speeding car so much in my life. I actually looked at the handle a couple of times to see if I could make it look like an accident.

I tried to close my eyes and go to sleep, but this utter —- kept on tapping my shoulder EVERY FIVE MINUTES to show me some utter CRAP animation / music video / MENU(!) on his mobile phone. Oh man, you have NO idea how much I wanted to throw that damn thing out of the window. On top of that, he kept getting a picture of himself out of his pocket, pointing at the picture and then pointing at himself.

I had to put up with FOUR HOURS of this guy.

Then he sat there with the crappy tinny distorted phone speaker blearing RIGHT NEXT TO MY EAR some utter bobbins “music” that sounded like a cartoon character being thrown down a bottomless well.

By the time I got to Dakhla I was ready to kill, kill and kill again. And I’m a lover, not a fighter.

And just to add injury to insult, the tooth filling that I had done a few days ago in Barcelona FELL OUT.

Any lesser mortal would have given up at this point. But I realised what I needed was a POWER-UP KEBAB…

A tasty shawarma and a coke increased my hit-points to 125 and I started to see the funny side.

Is this the best Africa can throw at me? Ha! Even if it takes me the rest of the year, I’m going to crack this nut, no matter how many sledgehammers I get through.

I grew up in a time in which you could not save your computer games. I’m used to this kind of nonsense.

After some faffing about with photocopies of my passport (so everyone on the bus didn’t have to wait for fifteen minutes at every police checkpoint while they took down my details), I hopped on the bus back to Agadir. It would be 2 days before I arrived in Rabat.