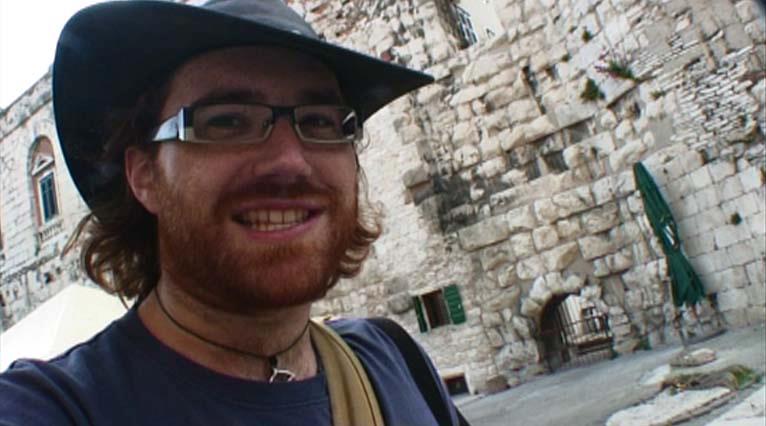 We got into Podgorica so early, my legs were shaking. I immediately hopped a taxi to the nearby border with Albania. My driver, Ratko, was top – he didn’t speak much English, but he got the gist of what I was doing and was happy to take me into Albania for a couple of minutes to stomp around and get some footage and GPS readings to prove that I had broken in.

But like when I went to Albania with Stan a couple of years ago, we soon turned around and headed back to civilisation. Interesting fact – everyone with a car in Albania owns an old Mercedes. Everyone. Weird.

Tell you what though – last time I came along this road, it was the middle of the night and we though that we were in the middle of farmland or something because there wasn’t a SINGLE light on in the distance.

Well, I guess if we had waited until light, we might have discovered that the land south of Podgorica is a national park. It looked like the lake district (in the north-west of England), only bigger. Beautiful.

Talking of beautiful – Montenegro – what a gem! Croatia will always have a special place in my heart but I’m seriously considering doing the dirty on the old girl. Montenegro! The mountain fortress! Wow!

…And tonight on ‘Top of the Balkans’, we may have a brand new number one…

Then it was onto the bus to Herceg Novi near the border with Croatia, some good Montenegrin nosh stuffed into my pie-hole and then the old border drop into Croatia. Soon enough, I was on a bus heading north from Dubrovnik to Spilt. On the bus, I got chatting to Tom, a recently-graduated civil engineer and fellow loather of all things concrete-and-glass-curtains. STONES and CLAY and WOOD, please. Thanks. Good chap – he was inter-railing around like your favourite ginger scouser here, only not as maniacally – he was taking a good three months to go about it, not three weeks.

Hadn’t been to Spilt before – wow! – it’s just as bloomin’ marvellous as Dubrovnik. Roman ruins! Statues! Crumbling old stuff! Yeah! Oh, I’m torn now… Can’t I love Croatia and Montenegro evenly? Like your children, no favourites? We could all convert to Mormonism and live together in a big house and… well… er…

I’ll shut up now shall I?

There were no trains north until about 10pm, so we marched off to the pub, drank more than was possibly reasonable and I polished off a big plate of fish like an big yellow, cartoon alleycat. YUM!

The guys who ran the pub were several shades of excellent, and when it turned out the owner was an Evertonian, well, it was free drinks all round. A tiny Japanese guy was so excited that he had just eaten shark that we all arranged to climb Mt Kilimanjaro together next year.

Tom and I somehow staggered back to the station in time to get onto the night train to Zagreb. It would be getting in at silly o’clock in the morning, but tomorrow, I would be heading back to Budapest… tomorrow, I’ll be getting my bag back.