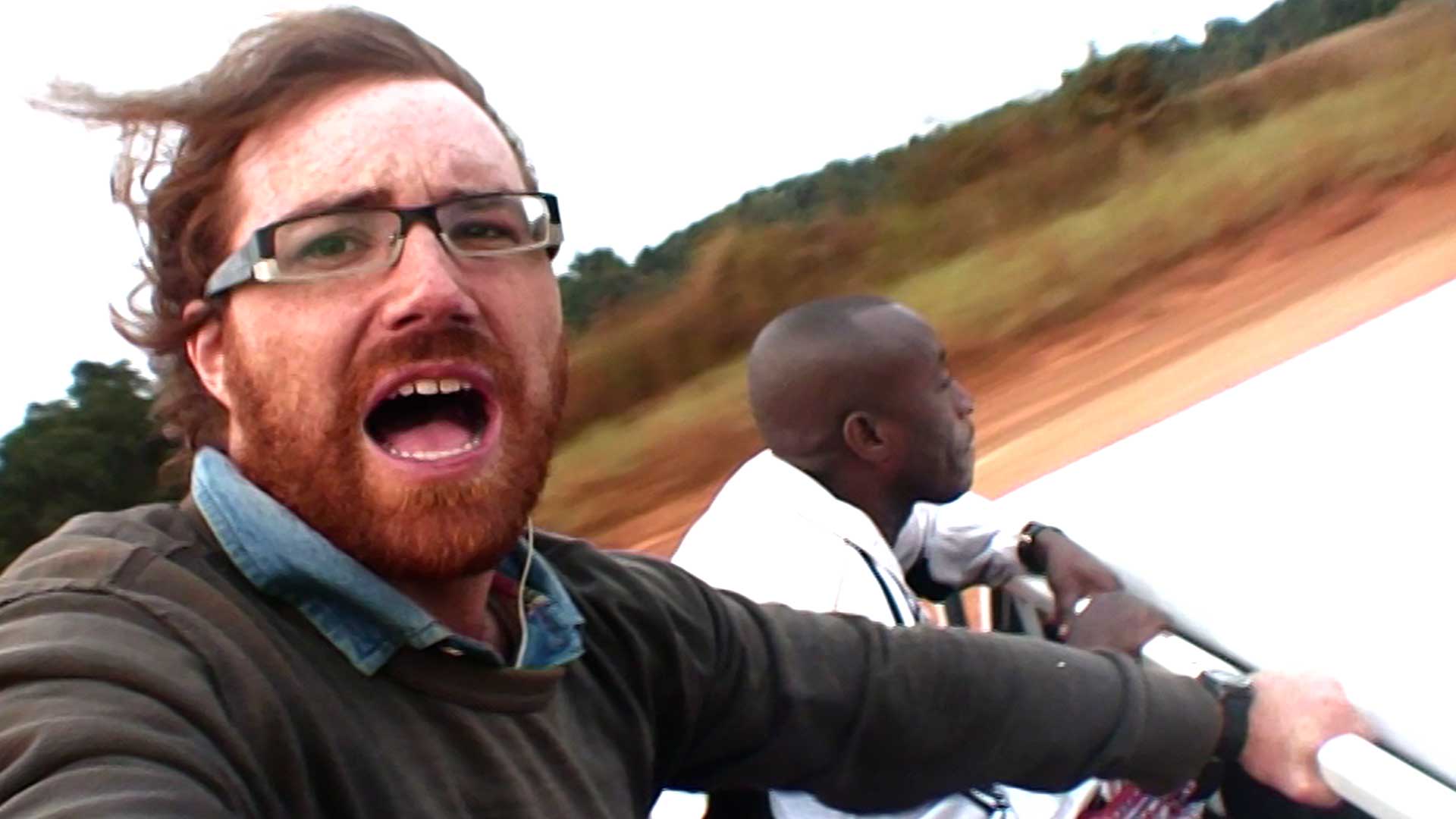 We motored in to Port Mole at 7am, gathered our things and got taken by the ferryman back to dry land.

THE ANDREA WAS STILL IN PORT!!

Oh yes, it STILL hadn’t left. It was still filled to the brim with the Cargo that had been loaded two weeks ago. Marc you legend, you might have just saved The Odyssey from collapse!

We said our goodbyes and I headed over to Tatayo’s gaff to say goodbye (and take a much-needed hot shower!). Justin had gone through his initiation and was nursing a cracking hangover (as well as more insect bites than could possibly be good for him). Alex had wussed out of doing it, so The Doctor was standing in his stead. Other than that, life we pretty similar down at the Bwiti Ranch.

Oh yeah, election results – Bongo-Son-Of-Bongo (predictably) won, there were some riots and nearly all the shops had been closed all week (good timing for our trip to Sao Tome). The dynasty continues…

The gang was heading down to a forest village to do some spirity bits and bobs. The train for the border with Congo apparently left at 8pm, so I had bags of time and Tatayo suggested that I come with. So I raced over to the Mbolo supermarket (all life is here!) to book my ticket, only to find that the train did leave at eight o’clock. Eight o’clock in the morning.

So Tatayo gave me a lift in the Mystery Machine to PK8 where the shared taxis leave heading south and then it was my second set of farewells for the day as I bid a fond adieu to Mobengo, Alex, Justin, Caroline and the irrepressible Tatayo. If you ever find yourself stuck in Libreville, you know where to go.

The first leg of the journey south (to Lamberéné) was remarkably pleasant. A fairly good road, a front seat to myself and a chance to write up my blog as I crossed once again into the Southern Hemisphere, illogically thinking that somehow makes me closer to Mandy, my girlfriend who is just nine time zones away in Australia.

However, once I reached Lamberéné, things took a turn for turn for the Africa. I was herded onto the back of a pickup truck, along with a ton of bananas, bags filled with dried fish and two other guys and we hurtled south so fast it made my toes curl.

On the sealed road it was quite exhilarating – the wind in your hair and all that jazz, but once we hit the dirt track it was nothing short of torture. It’s not like the driver slowed down to accommodate the dreadful road – in fact, I think he may have even sped up. After the first hour one of the guys got off so it was just me and this other guy – Anisé – clinging on for dear life. We found it was easier to stand and lean forwards, gripping the metal bar behind the cab, but this meant getting dustier than a feather duster in 1930s Oklahoma.

Then, as if to add a little more comedy value to the situation, they added another ton of bananas, some more fish and, oh yes, A LIVE GOAT to the mix. So not only did I have to worry about falling out or the driver crashing, I now had to worry about a goat crapping on my shoes.

It got dark as it does around these parts at 6pm, and there I was having been bumped around for a good three hours, standing astride bananas, fishes and a goat. The driver was maintaining a solid 100kmph no matter how many potholes the road through up and the effect of the roads corrugation was that my eyesight was flickering like an old movie. I held on with my left hand gripped tighter than a nyloc bolt and tweeted with my right hand so the folks back home could share in my terror in realtime.

It began to rain, something I pointed out to Anisé. He shook his head – it can’t rain, it’s not the rainy season. Impeccable logic, and sure enough, the rain went off.

It was a further two hours of this madness before we finally reached the border town of N’Dendé which was languishing in the middle of a powercut. I jumped out, my legs shaking from the ordeal of the previous five hours. After five days at sea fighting the elements, this was the last thing I needed.

My patina of dust was an inch thick, undoing the good work my hot shower at Tatayo’s this morning had done me. I got chatting to a guy, Michael, who was wearing a Liverpool shirt (always a good sign) and he directed me to the local guest house. It was a dingy affair, but cheap as chips so I ain’t complaining. After venturing outside (the power magically came back on) I sought the one horse in this one horse town, but somebody had shot it; so I grabbed a bottle of orange and a plate of fish and rice, devoured them like the Salaac and crashed out, tired beyond reason and just happy to be alive.