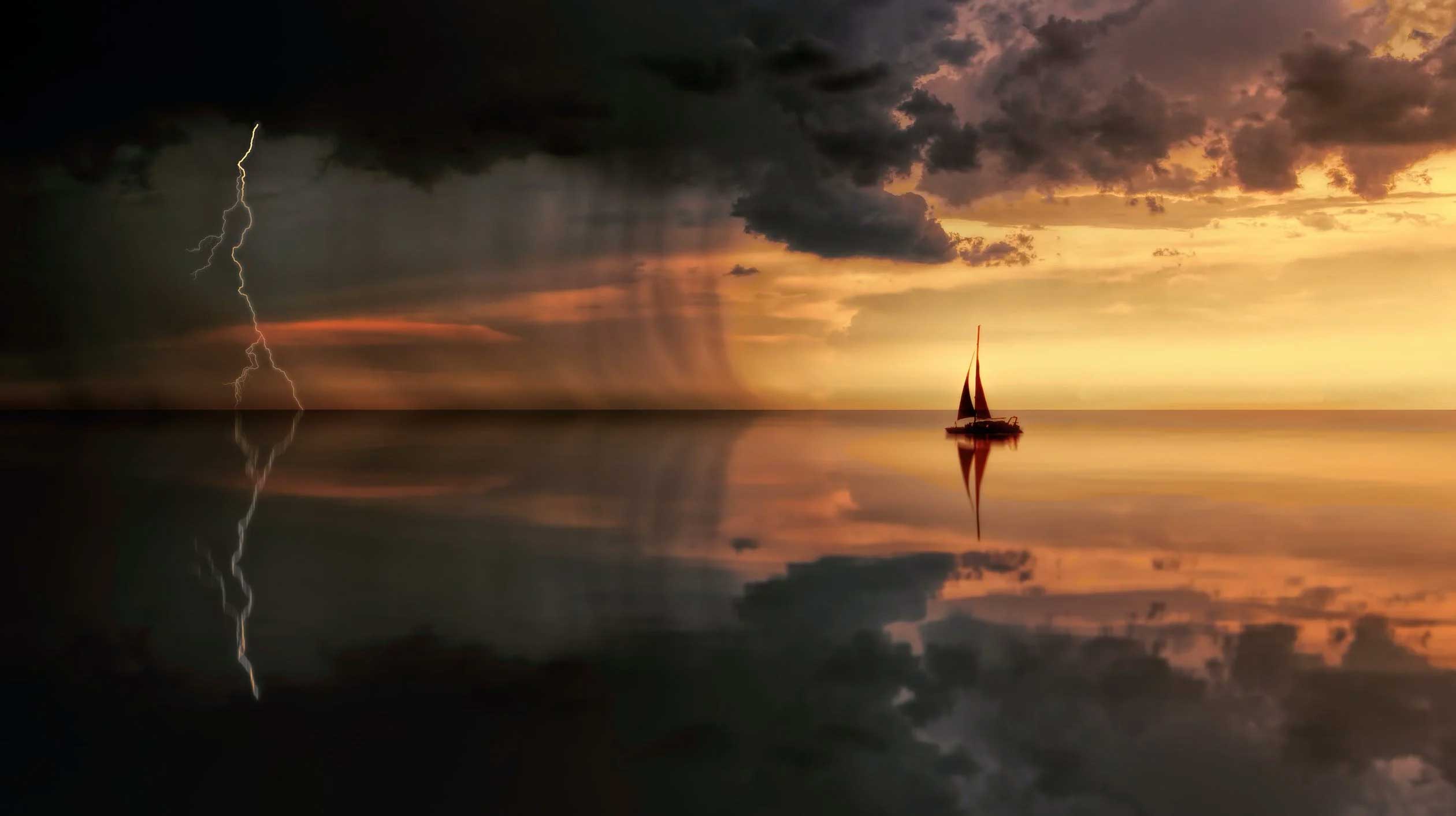 The madness of leaving at night, drunk and without a weather window slowly dawned on us – looking to port and looking to starboard, electrical storms cackled like mischievous witches in the heavens. I mean, sitting in the middle of the ocean inside what is effectively a large lightning conductor has got to test the judgment of even the most illogical earthlings.

So we dropped the sails and threw out the sea anchor – but this is the Gulf Stream – it’s like the bit in Finding Nemo with the surf dude turtles – you can’t fight the flow baby. Even with no sail, no engine and a sea anchor deployed, we were still doing four knots toward Mexico – four knots towards instant fried crackly doom.

Captain Johnny laughed at me for hurriedly putting my gloves on. You think that a tiny bit of leather is going to save you if we get struck by 100,000 volts, sailor?

The laugher followed the Captain as he made his way downstairs to eat a banana.
Luckily (and because Zeus and Pallas Athena are looking out for me, obviously) the storms passed harmlessly to the sides of us. So now there was nothing stopping us heading FULL PELT to Mexico. Except for the fact that Captain Johnny wouldn’t let me turn the engine on, so we slowly meandered our way over the wibbly-wobbly water towards the land of the cactus standing, snake chomping eagle and ludicrously big hats.

I set out a fishing line (really nothing much more than a lure on the end of a string) and caught a BIG FISH. Well, it was the biggest I’ve ever caught – a Maui Maui I think it’s called – lots of lovely bright colours. Tasty too.

When we got to Isla Mujertas, the little spit of an island a few miles off the coast of Cancun, it was dark and Captain Johnny, being the wonderfully impractical piratey buccaneer that he is, decided we would try a night entrance to the marina.

Well, it seemed like a good idea at the time…

Only, aren’t we’re a bit close to the… THUD!

We were more grounded than a naughty teenager. I mean, I was happy to hit Mexican soil, but this wasn’t quite what I had in mind…

So for the next panicked half-hour we went a little crazy trying to rescue the yacht from the slow shifting sands. We put the sails up and Johnny damn near blew the engine, but eventually we managed to shift ourselves free. Panic over. Poseidon’s last laugh, our last trial by sea. Johnny thought it best just to anchor up in the middle of the channel(!) until daybreak, so that’s what we did, taking shifts to make sure nothing went bump in the dark.