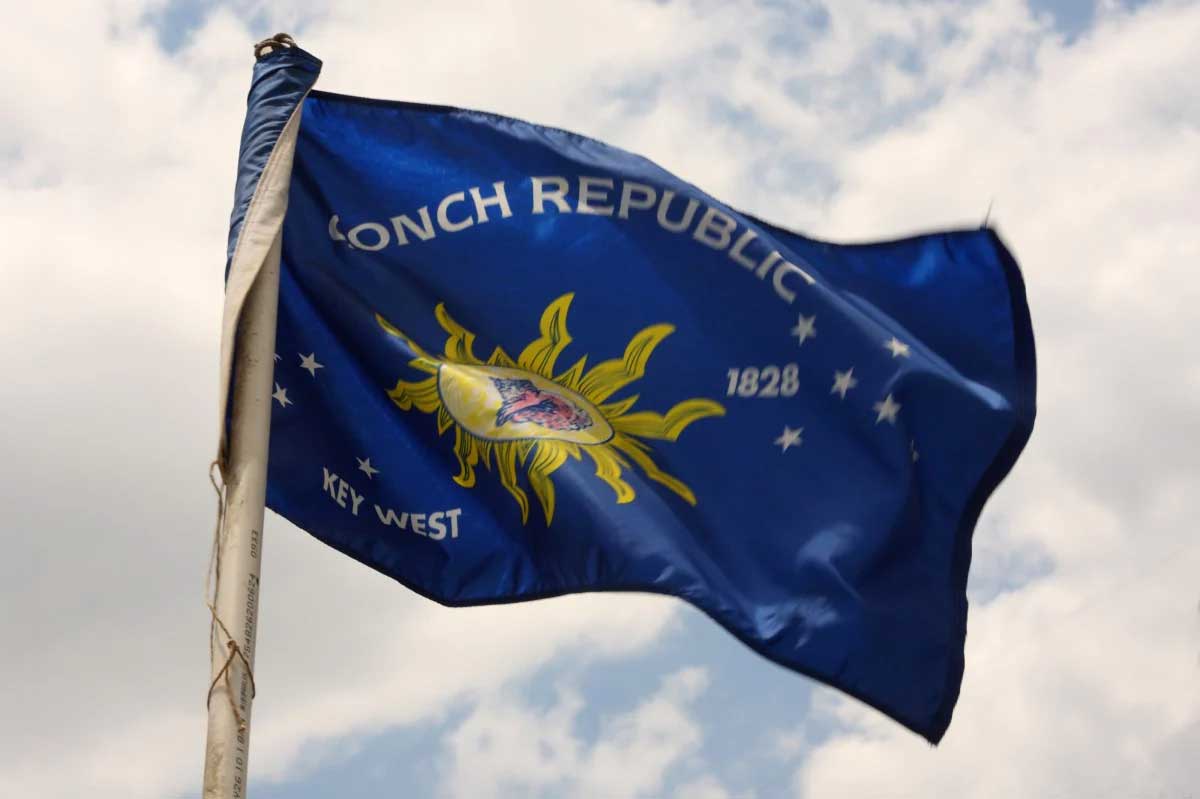 Getting up nice and early, Midge gave me a list of people to talk to about getting a boat over to Cuba. First up, Captain Finbar of the Schooner Wolf, the flagship of the Conch (pronounced Conk) Republic.

The Conch Republic was founded in 1982 as a response to the US government setting up a border post between the most northerly Key and mainland Florida. It was a grand plan of the Reagan administration to stop drugs, Cuban refugees and…But hang on – if you have to go through customs to get out, doesn’t that mean that the Florida Keys are a separate country?

That’s what Captain Finbar and his friends thought, and so they ceded from the union and declared themselves an independent state – The Conch Republic. They then declared WAR on the US and set out on the Wolf to attack the US Coastguard with water balloons and stale Cuban bread. The aim was to lose the battle, surrender unconditionally and receive a billion dollars in aid from the US Government.
They never got the aid money, but the border post was soon scrapped. Now every year on that day, they re-enact the battle with the coastguard – water pistols at dawn!!

Captain Finbar was brilliant, a proper old pirate of the kind you just don’t meet anymore. I’m sure if the Wolf wasn’t getting fixed up, he’d give me a lift to Cuba and tell the US Treasury to shove their permission where the sun don’t shine. There was a young guy helping on the boat, Captain Seth, and he took me around the marina to see if we could get something set up.

Again, everyone was more than happy to take me to Cuba – but only with that permission, and it STILL hadn’t arrived.

It being St. Patrick’s Day, Seth suggested I go into Key West and enjoy myself. He said I could sleep on the charter boat that his brother works on, The Appledore, moored up just a few blocks from Duval Street – party central of this sleepy little town. With no other options available, I decided it would be best to dive head-first into The Beer Vortex and see what happens.

*I made a stack of new friends. I can’t remember any of their names. Or their faces.

*I met St. Patrick himself. He carried a staff with a snake wrapped around it, and from out of the snake’s mouth came forth Jameson’s Whisky. He truly was a saint.

*I stumbled upon a book (in a bar) called CUBA: The Definitive Guide to getting there Legally and Illegally. Better still, I made arrangements with the bar staff to meet the author the next day.

*I must have allow at least 50 Americans to think I was Irish in order to get free drinks.

*I met a couple of swingers who wanted to take me home with them. I politely declined.

*I went to a naked disco. Why we don’t have one in Glastonbury I’ll never know.

*I can’t remember anything after that.

Day 6: Shut Your Eyes And Hope For The Best