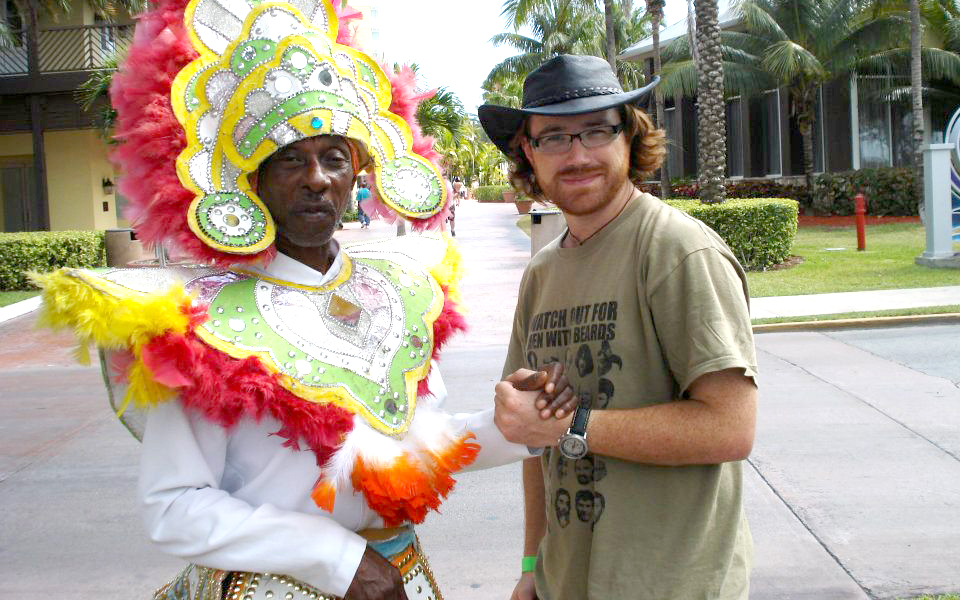 As I write this, I’m sitting in a lounge on the day cruise over to The Bahamas. It’s usually about $40 there and back, but because it’s Spring Break, they’ve hiked the price up to $120. But still, it’s cheaper than paying for your own boat.

It’s an old-ish boat. There’s dented plastic panelling on the ceiling and gourdy little golden lights set into it. There are mirrors everywhere that have bent and distorted with time and the seats are various shades of Opal Fruit. There’s a soul-destroying casino, not enough sun-loungers outside, the air-con is set to ‘Arctic Blast’ inside. There’s a television in the corner of the bar showing fuzzy basketball games. There’s a small pool, but it’s too cold for anyone to bother swimming. There’s that constant humming and vibration that makes me wonder why people willingly plonk themselves on cruises like this for weeks on end. All I can think is Hi-De-Hi Campers!

It’s really not for me.

The boat’s packed full of college kids (presumably taking advantage of the fact they can actually buy alcohol in The Bahamas), which gives the boat a bit of a youthful, party atmosphere that you don’t really get on the Caribbean Cruisers – which is good – although I wish they would stop whistling the Raiders theme at me.

Back on the boat now…had a good couple of hours in Grand Bahama, nice beach – shame about the soulless development surrounding it. Looks like an outlet village. But now the only countries left to visit in the Americas both begin with ‘C’, and end in ‘A’. But one is going to be MUCH easier to get to than the other. I’m totally bricking it for one of them, that I’m not going to be able to get there. Now…where did I put my beer?