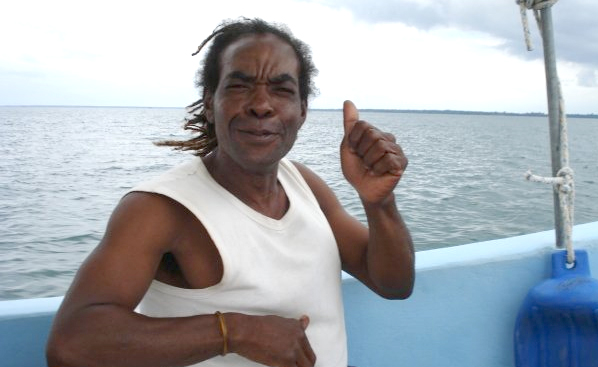 I got into Guatemala City about 10am (not much sleep on the bus then) and hopped straight onto a bus for Puerto Barrios on the Caribbean coast. This was the plan for getting to Belize, but it was a little stuffed up by the fact that I was running four hours late. Now Belize isn’t Belizey-Peasy as it’s name suggests. More affiliated with the Caribbean (down fried chicken!) than Latin America, this once-British enclave of Central America is a little off the beaten path and a little tricky to get to. It involves a five-hour coach journey and a couple of boats.

There’s a boat that leaves Puerto Barrios for Punta Gorda in Belize at 2pm and then comes back at 4pm. I got to Puerto Barrios at 5pm. But luckily, I met Ishmael (as in Call me…). This wonderfully crazy guy from Livingstone in Guatemala was on the bus with me from the capital. Now Livingstone is a little town on the Caribbean coast that is only accessible by boat – it’s halfway to Belize.

Ishmael took me under his wing and we headed over Livingstone. He thought he might be able to help me get a private boat over to Punta Gorda and back before it got dark. But it was not to be, it was just too late in the day. He did however, sort me out with a boat the following morning and offer me somewhere to kip for the night.

Ishmael’s place was pretty basic – no electricity or running water, but it had a hammock and you know I’m a sucker for hammocks. So I dropped off my gear and we headed out to what passes for ‘town’ in Livingston (the main street) and had a few drinks, got something to eat and got to hang out with Ishmael’s mates.