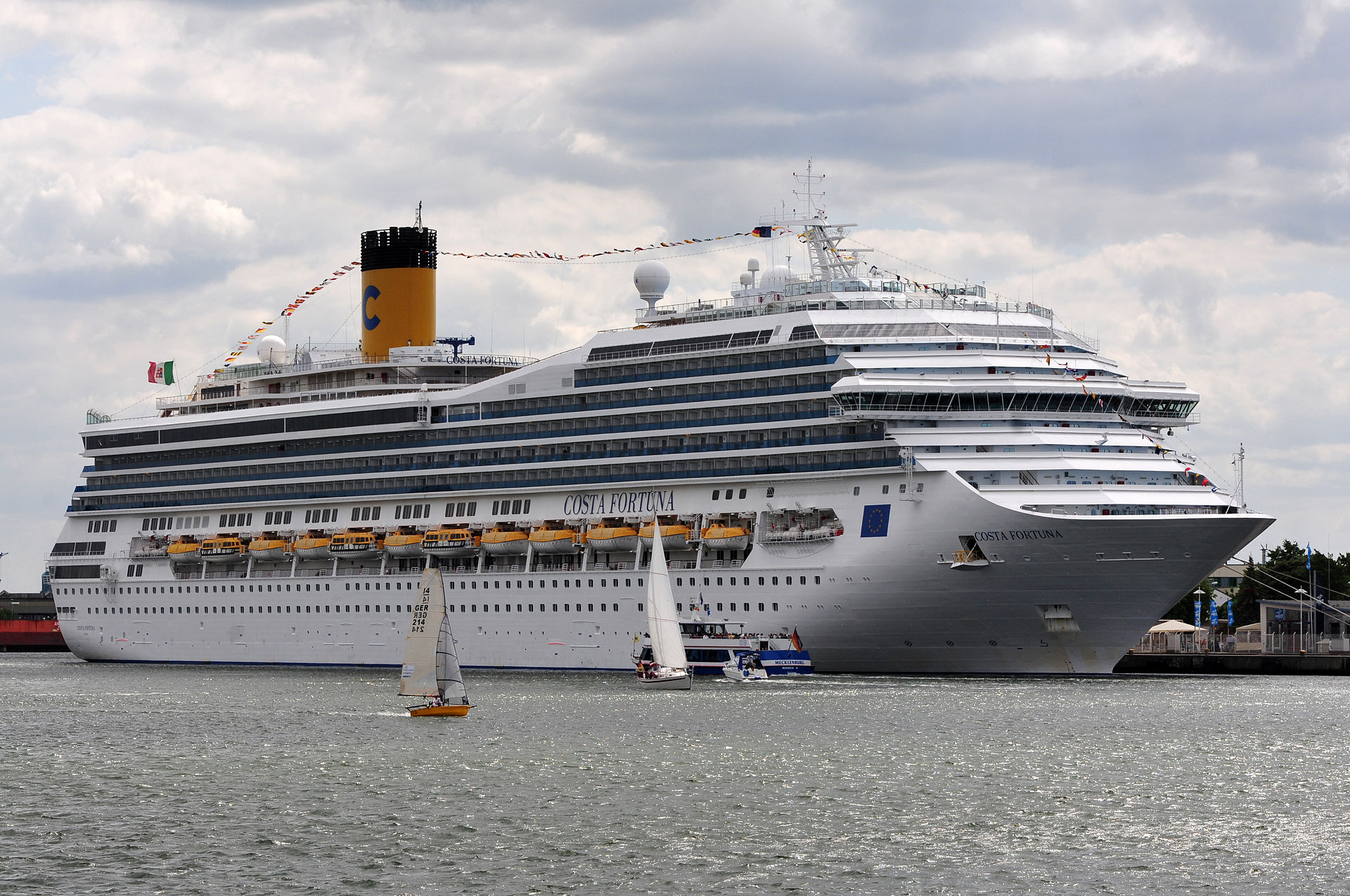 Got on the Internet as soon as I could and there it was – a message from Lorna, my guardian angel, bearing the heading ‘Costa cruise sorted for today’.

I was sorted on a CRUISE SHIP to the Dominican Republic. A cruise ship!! Leaving that day.

The Costa Fortuna. I had just hitched a ride on a Cruise Ship!

A wonderful guy named Donald Ferguson, a representative for Rooster PR had gone out of his way to sort it out. What a legend. THANK YOU Donald! Excited, I headed down to the port to meet the very lovely Roberta and Rosa, who added me to the passenger list and gave me my Costa Card. I was in! I’d be in the Dominican Republic in the morning.

I returned to Bytes, Beans and Websites to pick up my stuff and say goodbye to Sarah and boarded my behemoth of the high seas. I was given a cabin and a ticket for dinner, but better than that – I was allowed to go up to the bridge to watch the ship disembark with the captain.

Now the Costa Fortuna is an Italian ship – none of that stiff-upper-lip Britishness here! Bearing that in mind, the captain instructed me to watch out for the signal as we pulled out of port.

Well, the ship gives three long blasts, then the lovely ladies who work in the harbour-side sushi bar come running out and they lift up their tops and that’s the signal so we can depart.

I thought he was joking!!

But no, this is an important maritime tradition amongst the crews of the Italian Liners and the girls of the sushi-bar. A time-honoured tradition that I for one was proud to be part of. And happy to get on tape…!

The captain, Claudio, was an absolute top bloke – he even presented me with a die-cast model of the ship, which I’m going to Fed-Ex to Australia to sit on the mantelpiece awaiting my return.

After that, I had the run of the ship. So I did some investigations – the upper deck, filled during the day, was now quiet and everyone was down below preparing for dinner. There was the usual cruise ship stuff on deck – sun loungers, swimming pools, Jacuzzis, a super-happy-fun-slide… but it was just nice to catch the breeze and watch St. Thomas disappear into the distance.

Down below was a multitude of restaurants, bars, slot machines – my dinner was surprisingly good (hurrah for the Italians!) and afterwards, I attended a Greek party night(!) with the staff who had so warmly welcomed a half-crazed ginger beardy traveller who had somehow managed to hitch-hike onto their multi-multi-million dollar cruise ship.