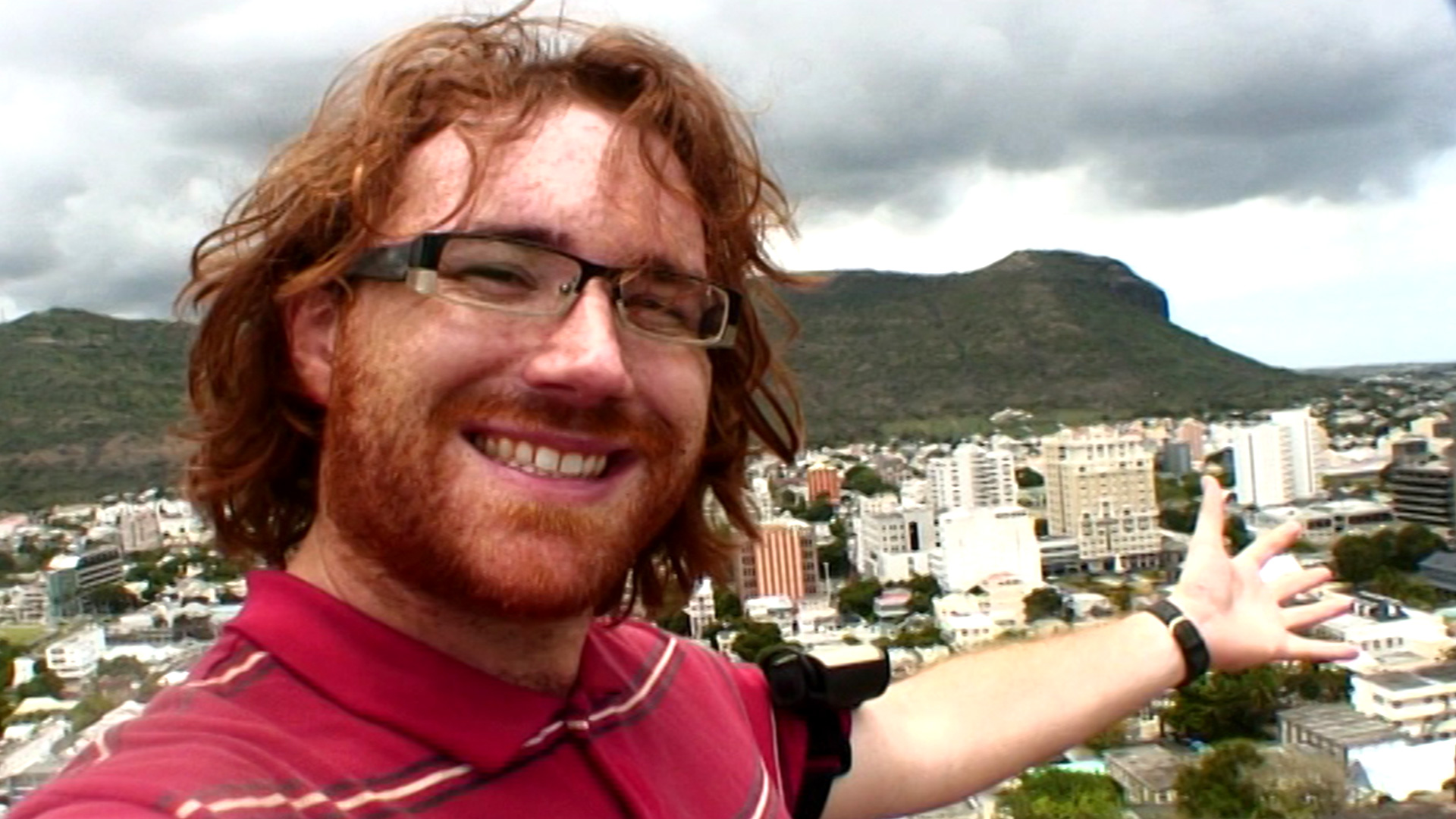 I stepped off the Trochetia and into country 124 feeling marvelously, marvelous about this turn of events. Simply put, I couldn’t have done this any faster. Considering that I only left Tanzania on the 20th October – 11 days ago – and considering that I’ve taken four separate boat journeys as well as a two-day bus journey across Madagascar, things have gone surprisingly well.

You see, the wonderful Trochetia does go back to Madagascar, but not until a week next Wednesday. I can take it back to Réunion tomorrow (which is what I plan to do) but after that I’m going to be fishing for a boat back to Madagascar for – who knows – maybe a week or so. If my experiences in Cape Verde and Gabon are anything to go by, the Trochetia may be the only choice.

But in the wonderful Odyssey tradition of just making it up as I go along, I chose not to fret – I try to achieve at least five impossible things before breakfast. So, Mauritius, what have you got for us?

I checked into a cheap little hotel in Chinatown, ate a hearty breakfast with the owner before striding out onto the streets for a walking tour of the city of Port Louis.

Now Mauritius is famous for two things – the dodo and stamps. Yes, stamps – the things you lick and stick in the corner of your envelope (remember them?). I’ll explain more later but right now, I’m taking in the cracking view from the top of Fort Adelaide.

Well, the view may be cracking, but the architecture down below certain isn’t. Mauritius, like countless other countries (including mine) thoughtfully demolished everything that had a murmur of style or class about it in the 1960s. Only churches were spared the wrecker’s ball on the grounds that somebody had sprinkled some magic water around the place (I’m not making this up, sweet alien interlopers). Oh hang on, they also saved the buildings that accommodate the people who made the decision to knock all the other stuff down. FUNNY THAT INNIT? Yes, well if there is one thing that we don’t need; another rant about architectural crapitude by yours truly here, but I suspect there is something of a deep regret amongst those of a certain age that they destroyed what they did not have the wit, intellect or style to better.

Anyway, Fort Adelaide, perched up on a bluff overlooking the good city of Port Louis, were people speak French, write English, eat Indian, look Afro-Chinese and drive on the left. My kind of town.

I noticed the royal crown above the gateway bore the monogram ‘WR IV’ and concluded (in my head) that the fort must have been built sometime between 1830 and 1840. Imagine my smartie-pantic delight upon finding out it was built in 1835. I think that Queen Adelaide was William IV’s wife, but I’m not 100% sure. If I had web access right now, I’d check it on Wikipedia, but then again, if I had web access right now, I’d probably wouldn’t be writing this, I’d be surfing for naughty pictures of The Eleventh Doctor’s assistant instead.

Anyway, I’m off now, back down the hill to check out the racecourse that dominates the eastern end of the city (the second racecourse oldest in the world, I believe), the Natural History Museum (I fancy a dodo egg for lunch) and finally, the Blue Penny Museum, where we will learn more about Mauritius’ most precious artefacts.

I headed down to the racecourse only to discover that it was Saturday (you lose track on the road, you really do) and therefore, there were races on. I found this fact tremendously exciting due to the fact I have the brain of an eight-year old child. I keep it in a jar on the mantelpiece. So I paid my 150 Mauritian Rupees (three quid, women get in half price, but the guy on the ticket desk wouldn’t believe I was a South African sprinter) and headed over the course to place a bet on the first race.

Using an age-old strategy that has always let me down in the Grand National, I placed a bet on the favourite (to recoup my bet should he win) and picked another that was around 20-1. So I plumbed for Power of Poseidan (appropriate, given this is The Odyssey and therefore Poseidan is my silent nemesis; damn him and his fishy wives) and an outsider called Cut Em Up, which I think is great advice for a racehorse. NOT FOR BMWs, I hasten to add.

I retired to the stands to watch the spectacle – just once around the lap, but that’s all it took for Power of Poseidan to fail miserably, but for Cut Em Up to do just that and ROMP HOME FIRST!!

I haven’t been this excited since I came second in that beauty contest last time I played Monopoly.

I strode over the field to collect my winnings – nearly €100 worth. Oh. Hell. Yeah! My gut instinct was to run to the pub, but I had promised my blog that I’d check out the Museums, so I caught my breath and headed back across town, beaming like a teenager after his first eventful night.

Well, I guess that I have no extra wisdom to impart over the dodo, other than what I already know. The Dodo (Deadasus dodous) was only ever found on Mauritius. Noah saw fit to drop them off there on his way to dump all the marsupials who ever lived, off in Australia. With no natural predators, the Dodo found life on Mauritius sweet – no humans, no foxes, no Paris Hilton. Happy days.

Then humans turned up with their big clod-hoppers and wiped these weird looking flightless birds out. It took them over a millennium to manage this feat, and when they did… well, nobody much cared.

A few centuries later, the curator of the Natural History Museum in Oxford, England felt that his stuffed dodo specimen was looking a bit tatty, so he lashed it on a bonfire. It was only his quick-thinking assistant who saved what would prove to be the only preserved dodo in the world from the flames. Now even more dog-eared (and slightly scorched), it went back on display for the viewing pleasure of the hoi polloi, where one day it was spotted by that most delightful purveyor of Victorian child pornography, Charlie Dodgeson; aka Lewis Carroll.

By inserting the Dodo as a character in his Alice books, Carroll secured the dodo’s place in history as the most famous extinct animal in the world.

That’s all I know off the top of my head, if you want to know more, I suggest you pop in to the Port Louis Natural History Museum – on a weekday, obviously…while you’re in school.

I had more luck at the Blue Penny museum, although I did get a little taken away with the spectacular old maps on display and almost forgot what I came in here for. Now as any Philatelist worth his salt knows, one of the most valuable stamps in existence is The Mauritian Post Office Blue, quickly followed by the Post Office Red. These were two little iddy scraps of paper printed, apparently by mistake, in the 1840s. The rumour is that they were supposed to say “Postage Paid” down the side, but actually said “Post Office”. They were recalled and burnt, but not before the Governor’s wife posted off a load of invitations to a party with our little friends stuck to the envelopes. There’s now about 26 of these tiny monkeys in existence and as stamps are to Pokémon, it’s a little like catching a Mew. YES, THEY ARE THAT RARE. Most of these stamps have been postmarked, but there are possibly only five in the world that were never sent through the mail, and two of them – a one penny red and a two penny blue – were bought by a consortium of Mauritian businesses in 1993 for a staggering amount of money and put on display in this purpose-built museum (which, incidentally, cost substantially less to build than the stamps cost to buy).

These two tiny bits of paper are now possibly the most valuable things on the island and to protect their colour, they are only illuminated for a few minutes every hour, and then only one at a time. Impatient ginger boy here used his mobile phone light to see the buggers. I’ve got to say it wasn’t exactly a teardrop-on-the-face-of-eternity moment, but each to their own, I guess.

Now if it had been a Mew, it would have been a different story…

Now there was nothing to stop me following my heart’s desire and going the pub. Which is exactly what I did. There wasn’t much action in there, which was surprising for a Saturday night, so I thought I’d abuse the free wi-fi for an hour, whilst nursing a pint before heading off to Grand Baie which is were (I guessed) the action would be.

Ah yes, but that’s before my competitive spirit got the better of me (which happens) and I noticed the ‘Drink Your Way Around The World’ board at the end of the bar. Now, as that was one of the titles that I considered before settling on ‘The Odyssey’, and as the computer software the bar tills use was coincidently called Odyssey, I figured, in for a penny, in for a pound. What do I have to do to get my name engraved on the leaderboard?

You have to drink 20 beers from 20 different countries.

No – over six weeks.

But has anyone ever done it in one night?

No, of course not. That would be silly.

The challenge was set. Darwin, my fantastically monikered barman, started me off on the long road to destruction. Could it be done?

You bet your ass it could be done. If Marty McFly taught us all anything, it’s that if you put your mind to it you can achieve anything. Via Denmark, America, Ireland, Madagascar, Belgium and Mexico, I drank my way around the world, all the while chatting with my comrades back in the UK via the joys of Skype.

At midnight it was all over. The bar was closing, I downed the last of my 20 drinks and Oliver, my new barman, signed and dated my form. I’d done what could possibly be the crowning achievement of my life. I had physically made it all the way overland from Uruguay to Mauritius and then imbibed the liquid form of many of the countries I saw on the way. My name would be going up on the board.

I haven’t felt this accomplished since I managed to finish the hottest curry in the world at The Rupali Restaurant in Newcastle and shook hands with the late, great Lord Abdul Latif himself.

Now I only had one minor problem. I was drunk as a skunk in an unfamiliar city, clutching a bag that contained my laptop and my camcorder. Any sensibly-minded type would retire to his hotel, job well done, and fall into a deep intoxicated slumber. But where did being sensible get me?

I headed off to Grand Baie anyway.

And that’s the last thing I remember.