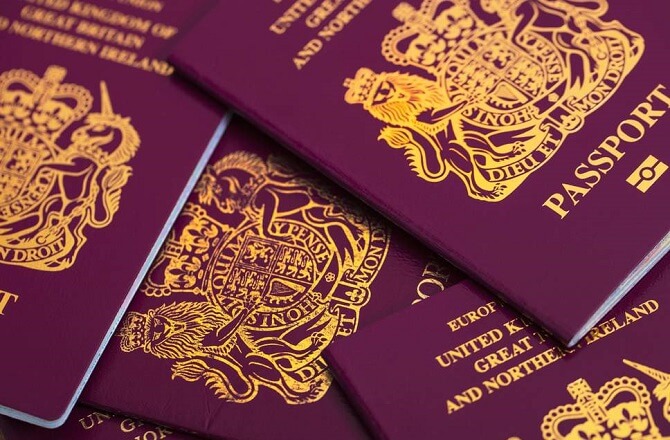 The British High Commission in Pretoria is a little tricky to find – I wandered about for about half-an-hour before I realised that the building with no sign and no flag was in fact our jolly old embassy.

I was served by a Scottish lady, who informed me that my new passport would take 10 days to come through and cost a whopping TWO HUNDRED QUID. Now being both in a rush and on a shoestring, this was something of a body blow. I cursed myself for not demanding that the border guards were a little more careful where they plonked their stamps. You can get away with random blots of ink peppered throughout your passport as long as they all stay congregated on the one page, but thanks to Africa’s lust for page-hogging glory (I have come to the conclusion that the amount of space in one’s passport taken up by entry and exit to one country is inversely proportionate to the country’s general feeling of self-worth).

The smallest stamp in my passport is China, a tiny but fierce red hexagonal affair, beautifully understated, meanwhile Gabon managed to sprawl itself, much in the manner of a lethargic teenager, over a whopping 3 pages, a total of nine separate stamps.

Making up for something, are we Gabon? The USA and Canada both have tiny stamps, and, hell Europe has no stamps at all, if you’re European.

Anyway, I didn’t figure I could do much about the price, but a bit of old school come-on-love-we’re-all-in-this-together brought the 10-day waiting period down to picking it up on Monday. I even got to keep hold of my old passport for the weekend, so I could make a break for the border with Botswana.

I then headed out to find bus times to Gabarone, the capital of Botswana. This turned out to be improbably difficult. I was, however, helped out by the nice folks at STA Travel, who probably deserve a mention since I also booked my original flight to South America through them.

Nearly all of the buses were full, unless I headed over to Jo’burg, which I didn’t fancy – Pretoria is a nice place and I felt safe there. I had missed all the buses for today, but there was a bus tomorrow morning. I had to shlump it all the way to the other side of town (the flaming taxi driver dropped me off a mile from the Bus Station, and everybody I asked for directions pointed me the wrong way. I ended up getting another taxi, which annoyed me no-end. I did manage to get a ticket for the next day’s bus, but for some illogical reason, I wasn’t allowed to buy a ticket back to Jo’burg (I had to buy that in Jo’burg).

It’s infuriating rules like this that really put me off Africa; nothing is ever easy. Crikey, it’s even worse than London.

LONDON: Just Like Home, Only A Little More Awkward

So I’d have to set off with blind abandon, hoping against hope that I could cadge a bus back to Jo’burg on Sunday. The nice folks at Lonely Planet had set me up with an interview on South African Breakfast TV on Monday, so failure was not an option. It also crossed my mind that they may employ a Suzanna Reid-a-like (the Jennifer Connelly of Breakfast Telly) who I could flirt outrageously with for the amusement of the hoi-polloi. I wanted to be there.

I’ve been slowly reconstructing my Laptop after the Congolese Police sabotaged it, so I headed to the local pub/internet wifi hotspot and wasted away my afternoon downloading, uploading and offloading to try and get my plucky little Dell Latitude X1 back up to speed.

Oh, and if one more person suggests I buy a Mac, I am going to shove my iPod where the sun don’t shine and enquire if it has crashed (like it does EVERY DAY) doing the incredibly difficult task of playing music. A few weeks ago, the nasty little Salacious Crubb of a thing decided to delete every song for no good reason other than it was bored of ALWAYS playing the same 5 songs (out of a choice of 4000) whenever I shuffle-shake the damnable thing.

In the evening, I headed back towards the backpackers to see if Andy, the British guy who had been living in Thailand (FAR!) too long (if that’s even possible), wanted to come and see District 9 with me.

Funnily enough, I met him halfway – he was coming to see me! District 9 it was then, although Andy took a little bit of convincing – he hadn’t been to the cinema since Howard The Duck (and who could blame him?). Knowing that the way to an Englishman’s heart is through his damaged liver, we went to the off-license so we could smuggle in a couple of bottles of whiskey. Why is there never any Mad Dog 20-20 when you need it?

The film was (as you will know if you’ve seen it) bloody HILARIOUS. Doublely so, given that Andy and I were gaffawing at the ridiculous South African accents all the way through (something our fellow patrons failed to find amusing, I really can’t see why). Prawns! I have to say, it was pretty cool watching a sci-fi movie that was set a few miles down the road.

After that, we headed over to Cool Runnings, at which I proceeded to lose all track of pretty much everything (including Andy). But they did play Killing In The Name Of, which made me happy. Once again, I was whisked around town by unknown forces, taken to that place with the Juke Box and Pool Table (and in this case I was expected to play, something that probably wasn’t such a good idea given that by this point I could neither see nor stand properly) and woke up the next morning in my dorm bed not knowing how or why I had managed to get back home in one piece still clutching my camera and laptop.

Oh, the beer scooter, shall I count the ways…