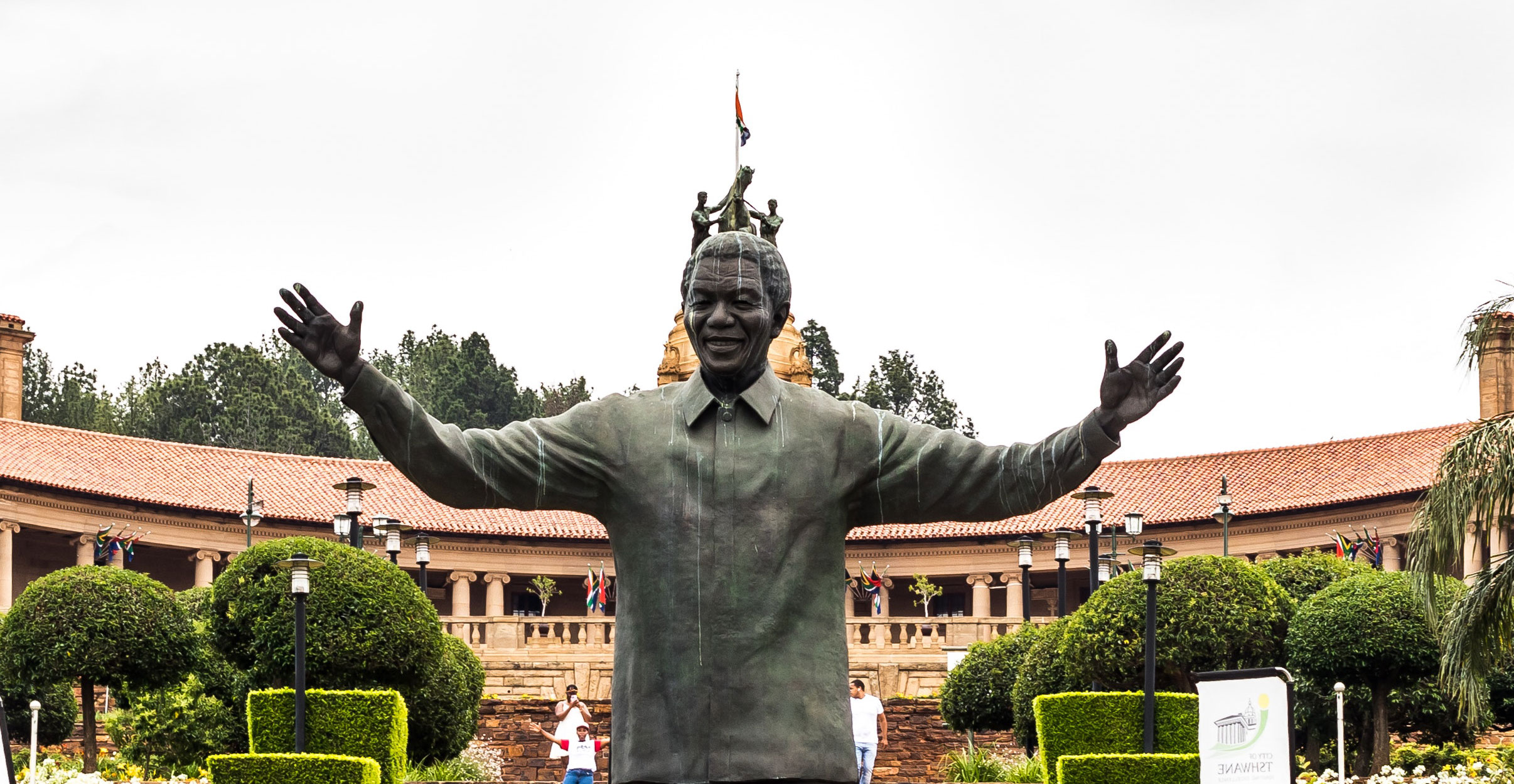 So… into the tenth month on the road and I finally, finally reach South Africa, what had, in my original estimation, been the half-way point for this adventure. That was before the Cape Verde Fiasco, the Gaff in Gabon and the Crisis in Congo. Now I’ll just have to settle with seeing Mandy again sometime next year – you’ve no idea how much that I would like to wake up in the morning with her beside me. To say it’s been too long, is an understatement.

Africa, sorry, you’ve been a bitch. A real bitch. But now I’ve made it to South Africa I’m feeling good, no injuries, no countries that I couldn’t get into (one way or another) and best of all, I still haven’t had a day off ill. My main task here is to get a new passport, as although mine has a good two pages left (as well as copious amounts of space around solitary entry stamps), Africa has conspired to fill my little maroon book with as much ink as it possibly could. Seriously, I have no less than EIGHT different stamps for Gabon – considering I only (officially) entered that country once, that’s some feat.

I have a strong suspicion that the wives of African border officials have to make do with the couch while their husbands spend the night cuddling up to their little stamps. The obsession is as bizarre as it is homogeneous. If it was just one country, they’d get a let, but when I enter Togo for just three hours and lose three good pages of my passport in the process, one can only hum in amused disbelief.

But, hey, if Africa wasn’t TOTALLY LUDICROUS, then it wouldn’t be Africa now, would it?

The morning began as early as it possibly could on the overnight bus from Windhoek in Namibia. We crossed the border around 4am, getting into the pleasant town of Uppington later that morning. I didn’t have a ticket for the connecting bus and (after being told that all the buses were full until next Monday) proceeded to beg for a space on the bus. Luckily, somebody hadn’t turned up, so I managed to snag a seat to Pretoria.

The Intercape bus service seems to be run by a Brian Souter-esque evangelical Christian, which made the choice of on-board movies rather less than compelling. If I want to be preached at, I’ll go to a church thank you very much, I have little time for people who abuse a captive audience to proliferate their own world-view. I found the whole experience, erm… rude. It’s not like I can shut off my ears, and after an entire day of this glurge, I was ready to set up my own chapter of the South African Satanist Society.

I was particularly embarrassed when the hostess thanked God for getting us to Pretoria safely, rather than, you know, the driver who had ACTUALLY got us there. It reminded me of those egomaniacs who thank God for curing their cancer, when in reality it was a small army of specialised doctors, surgeons, oncologists, radiologists, scientists and researchers who saved their life. I doubt too many people bother to track down all the people they should be thanking, but it would make a good television show.

The bus journey was made more tolerable by the fact the bus was comfortable, the roads were, well… roads and we stopped a good number of times for food and drink, which was provided by various clean, snack-filled service stations along the way.

Something that I think is much more shocking than what you see in much of Sub-Saharan Africa (SSA) is what you don’t see – and South Africa, being a developed nation, really drove this home. In most of the countries that I’ve travelled through in this continent, you see no industry, no manufacturing (when did you last buy something with ‘Made In Gabon’ stamped on it?), no farms bigger than subsistence-level plots, no farm equipment, no decent housing, no decent hospitals, no decent schools (at least not for the locals) and, most horrifying of all, hardly any elderly people. In fact, thanks to Malaria, AIDS, war, malnutrition and road accidents, over half of the population of SSA is under the age of 18.

Luckily for South Africa, it has all the mod cons associated with modern life (which, having just struggled through the last vestiges of the 17th century, I can quite honest say is not rubbish), and the journey was similar to one you would take across the USA.

I got chatting to a couple of South African guys on the bus. One of them, Jared, filled me in on the beat of modern South Africa. Apparently, Pretoria is the capital of the ‘Boarvost Eaters’ (the Afrikaans), Johannesburg is just as dangerous as everyone thinks it is and Cape Town is the best bit (shame I won’t be seeing it on this trip).

By the time we got to Jo’burg, it was dark and the first thing that greeted us in the murder capital of the world was, yes, a murder. A body bag at the side of the road, police cordon and two police cars, their lights flashing. I’ll be pressing on to Pretoria, if it’s all the same to you, thank you.

Arriving at around 9pm, I jumped a taxi to the Backpackers on Glyn Street (right next to the British High Commission). A little tired after my marathon coach journey from Windhoek, I was planning for an early night – but first I wanted something. I wanted something more than the desert wants the rain… I wanted KFC.

You really, really don’t miss something until it’s gone. I don’t think I’ve ever been to a country that has no KFC, (according to The Onion, Islamic, Jewish and Christian leaders hold a symposium each year celebrating their mutual love of chicken) but West and Central Africa have not a single outlet of the Colonel’s Finest in like 25 different countries. And as much as I bemoan American fast food culture, there are times when only a KFC will do.

After four months of Africa throwing everything it has at me, I felt I deserved it.

After devouring three pieces of original recipe like the Kraken (just three pieces, no coke and no fries thank you), I was walking back to the hostel when I realised I could also do with a drink. So I dropped in to ‘Cool Runnings’, a log-cabin style affair with good music playing. Now drinking on your own is sad. Even when I’m travelling on my tod, it is a very rare occasion that I’ll go into a bar without company, if I do, I’ll always be armed with my laptop or a book to read. The same rule applies to restaurants and cinemas. Although in a cinema, having a book doesn’t help.

In this case, I just intended to swig down a bottle of the local grog and then return to the Backpackers and go bo-bos.

The cute barmaid asked where I was from, I said Liverpool, she said she wanted to ask me something and before I knew it, I was knee-deep in conversation with the barstaff and barflies of Cool Runnings. The bar closed at god-knows o’clock and I was invited to join the staff on a good old-fashioned student night out.

In for a penny, in for a pound.

By the time we got to the place with the juke box and pool table (that’s pretty much all I remember of it), I was well and truly tanked-up and ready to take on the world. The barmaid, Mary Jane (or MJ – finally, I get to meet a chick called MJ) and her mate Eileen looked after me, eventually we ended up taking the party back to Eileen’s flat in the middle of town.

Ah, the beer vortex. I can’t recommend it enough.

Eileen’s flat was the stuff of all things that you’d expect to see if you went home with a girl from the Krazy House – vampire books, fairy tales, kick-ass CDs and DVDs, a hundred different ways of predicting the future… and, of course, a poster of Jack and Sally.

Eileen and I sat up arguing about nothing important until daybreak, while the others mooched around doing whatever it is you do in situations that you know you won’t remember properly in the morning. The whole shebang was a breath of fresh air – reminded me of a quality night out in Liverpool. These guys weren’t charity workers, they weren’t here to do a job, the conversation didn’t centre on the horror and futility of modern Africa – they lived here, this was their life, their home.

After 40 minutes kip, I headed out to the High Commission to get myself a new passport.