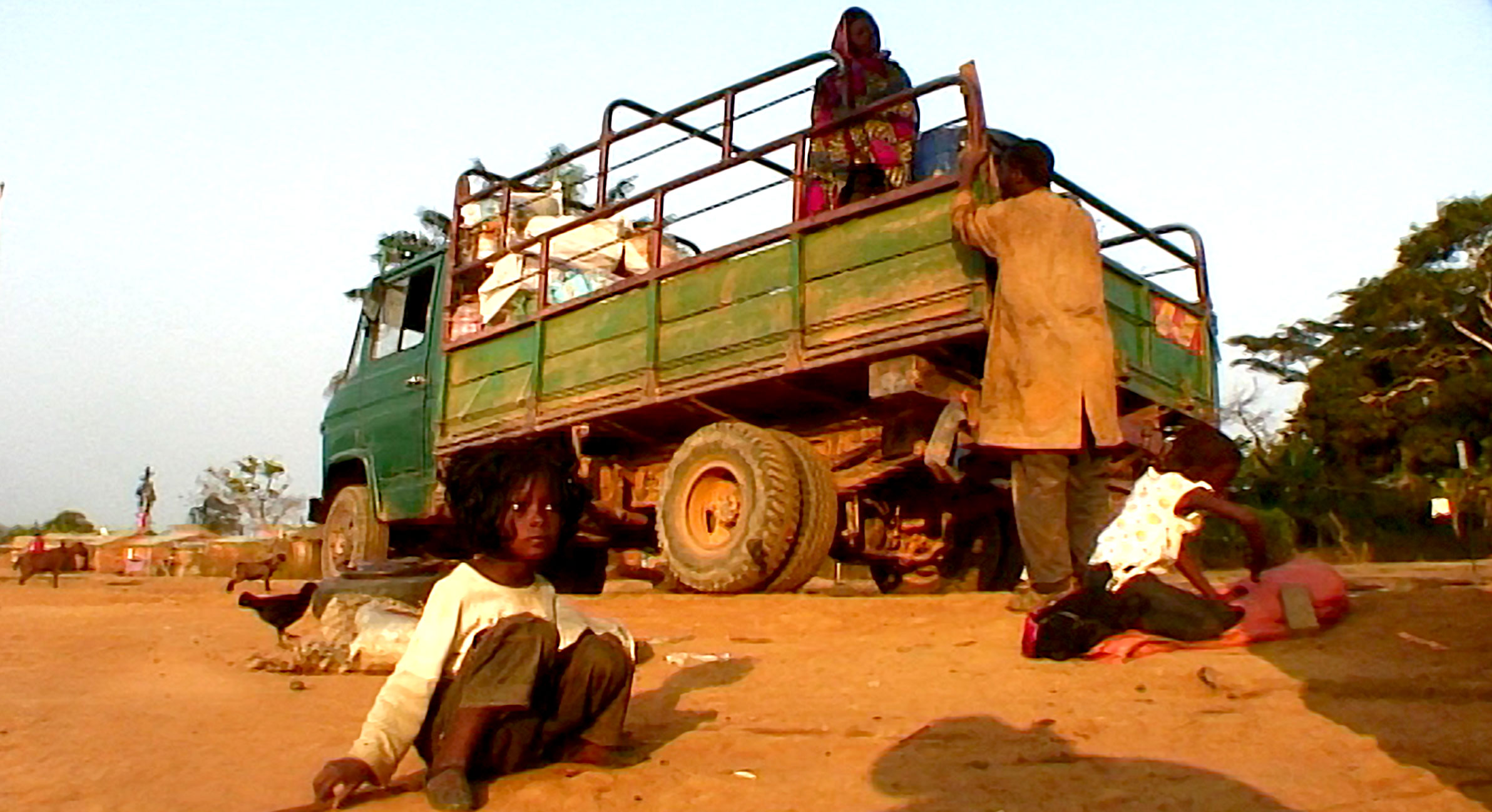 So I slept a second night in the truck cab. Again I was awoken at 6am; why, I have no clue, as we didn’t set off until after nine. Apart from the beautiful silver, fatty, fat, fat trees, the landscape is remarkably unappealing. Charred by war and slash and burn farming, much of it is blackened and barren. Angola has a lot of flat, fertile lands, but because its government is wearing oil goggles (1.4 billion barrels exported a DAY), they’re not interested in farming. Which is a shame, as otherwise Angola could easily feed itself and those around it; but as in all resource-rich, cash-poor African states, a mixed economy is beyond the capabilities of the drongos in charge. They can’t see the profit in it.

We reached the Mbenzi-Congo junction at around lunchtime, turning towards Luanda, but then pulling over at the side of the road for over an hour.

The police came along and papers were shuffled about. Some of the people in the truck were from Congo and didn’t have the necessary paperwork, so there was a bit of a kerfuffle going on. I hid in the cab, but eventually, one of them saw me and ordered me out. I handed over my passport – look, I’ve got a visa – they gave it back to me and one of the policemen told me to come with him and motioned to his motorbike. He muttered something in Portuguese and then said a word that was bound to make my blood run cold.

I walked slowly back to the cab to pick up my bags.

I took a deep breath – if they arrested me, I was truly stuffed. My phone was not working, the Congolese police had taken my spare and my UK SIM card (hence the dearth of Tweets recently) and nobody knew where the hell I was. I should have been in Luanda yesterday.

It crossed my mind to leg it, but given the horrific number of landmines still dotted around the countryside in Angola since the end of the forty-year civil war in 2002, I thought better of it. I took my bags and took my chances. He wanted some money for petrol, so I gave him a couple of dollars. One of the truck passengers spoke a little bit of English so I appealed to him. HELP ME.

He spoke to the Vogon and we managed to fudge the situation. The cop gave me the two dollars back and I headed back to the cab faster than you can say THANK CHRIST FOR THAT.

The police then left, with a cluster of Congolese stuffed into the back of their minivan. The driver and the owner of the truck started walking and I was left by the side of the road not knowing what the hell was going on with just a bunch of Angolan mothers for company. A pick-up truck stopped. I ran over and asked to be taken to the next town. Damn that $70, I guess I’ll just have to let it go.

The next town turned out to be just a mile or so down the road, and – even better – the bus to Luanda was due in half an hour. Talk about landing on my feet. The guys in the pick-up sorted me out with something to eat and drink. I was given some bush meat that tasted like a cross between pork and chicken. I hope to hell it wasn’t monkey.

I don’t have much of a problem with eating most things, but seriously, monkeys are a wee bit to genetically similar, it would be the gastronomic equivalent of incest. Plus I REALLY don’t want to get ebola.

The bus arrived on schedule (amazingly!) and I paid the fair (a whopping $50) and took my place sitting next to the driver on the metal hood that covered the engine. Peter, the driver, spoke good English and was a big jolly man who took the terrible road (he does this trip four times a week) in his stride.

In contrast to Captain Slow in the Truck, Peter thundered along as if potholes, adverse cambers and the impenetrable clouds of dust were no problem at all. By dinnertime, I was confident that we would reach Luanda before midnight. Peter let me use his phone to call Emilio, my CouchSurf contact, and I asked him to e-mail Mands to let her know that I was still alive.

Peter paid for my dinner of fish, rice and beer and we were about to hit the road when there was a problem with the engine. The driver’s mate spent an hour or so fixing a hose that had split. He used cigarette filters, superglue and rubber strapping. Soon enough, we were back on the trail, but Africa was to have the last laugh. After being stopped at a police checkpoint for over an hour (everyone had to get off the bus, have their details taken down and then when we got back on board), the grease monkeys were once again fiddling with the engine.

We drove another few miles before stopping again. I curled up into a ball on the engine shield and fell asleep: my one true superpower. Anytime, anyplace, anywhere.