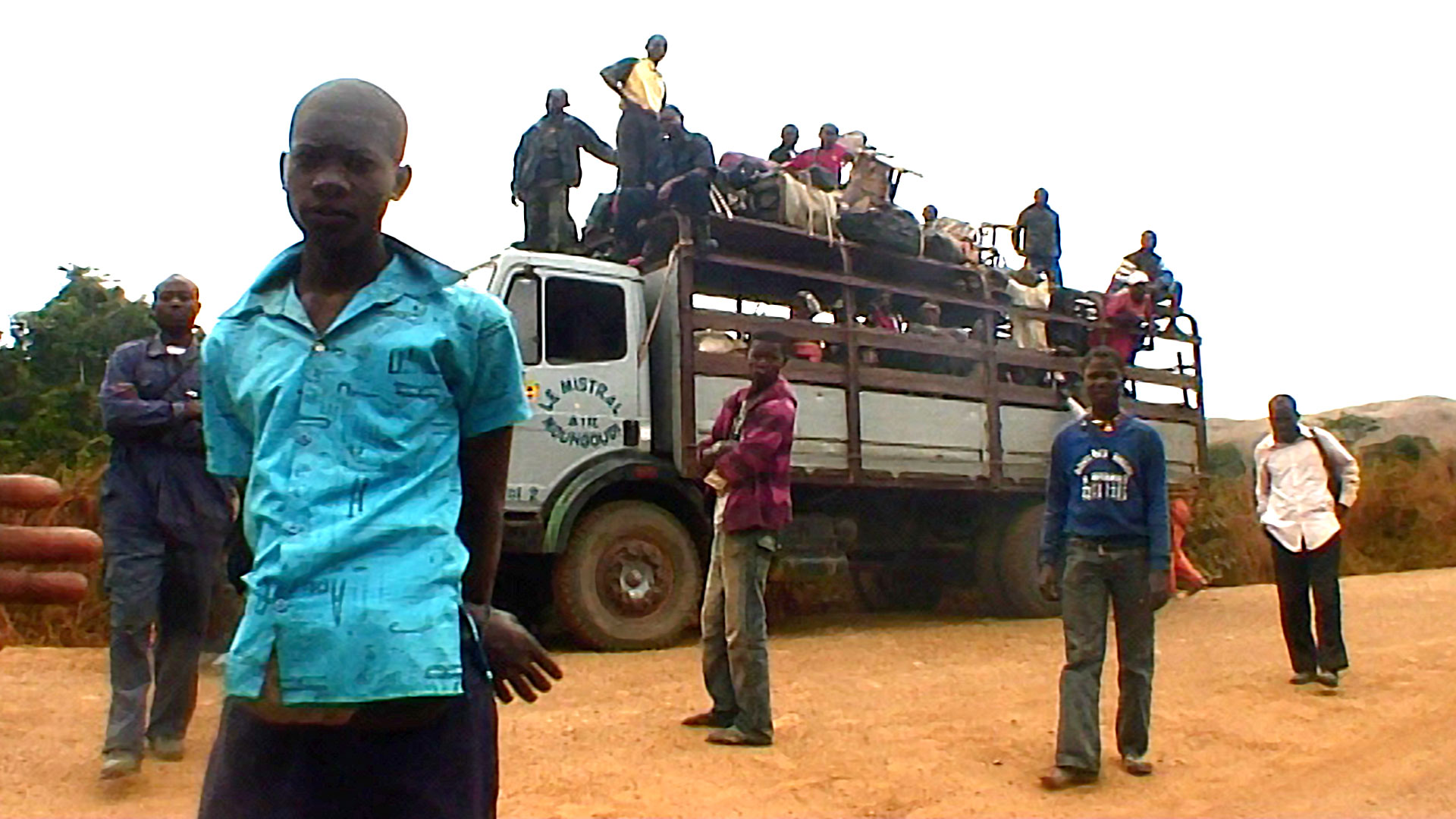 Setting off again at dawn, I found the shared truck for Dolisie (the junction half way to Congo’s capital city, Brazzaville) actually left early. I had to run to clamber on board the back as it pulled out. The truck was a fifty-year old cattle truck with open sides. It was carrying a staggering 73 people, their luggage, 14 live goats, several chickens and right by my feet, were two cow legs, still with their skin, blood oozing from the wounds beckoning flies like an open latrine.

But that wasn’t the worst thing.

The worst thing was the dust.

The ‘road’ (typically) was little more than a rudimentary track peppered with potholes, and corrugated, so it made your teeth shake. It was also the dustiest road I have ever seen, and I was sitting at the back of this damn truck trying to deal with the cloud of dust covering my bags, my hat, my clothes – and coating my lungs. Just to make things that extra special African brand of unpleasant, the truck was also rigged to blow its filthy black exhaust in the faces of those unfortunates (including your humble narrator here) sitting towards the rear of the truck.

What I really couldn’t fathom out was why it was so. I was charged €20 for trip – I did the math – €20 x 73 = €1460. And that doesn’t include the luggage. They had the monopoly on this route and could conceivably make this trip twice a day – there and back. That’s €3000 a day. Over a MILLION EUROS a year. The truck was older than Methuselah, petrol in Congo is not excessively expensive – the economics of Africa just boggles the mind, I just cannot for the life of me suss it out.

WHY CAN’T THEY BUY A DAMN COACH? With WINDOWS. That you can CLOSE. You know, so it’s possible to BREATHE.

Forget guys, T. I. A. Logic and Africa are queer bedfellows indeed.

I made do with a wet-wipe held over my mouth until it became too dirty (which took about ten minutes), and then I fished out a new one. Have you ever sanded a wooden floor with one of those sanding machines? You know how dusty everything gets and you have to open all the windows and wear a face mask? That’s what this was like.

And there were children, babies on board. And they didn’t have masks on. The dust mixed with the filthy black bellowing exhaust, would be doing untold damage to their lungs. For Christ’s sake, is not malaria, AIDS and the lack of clean water not killing enough African children? Do Africans REALLY have to come up with new and inventive ways of murdering skip-loads of infants every single bloody day?

Then again, even if the government built a road, the locals would no doubt see it as an invitation to drive like raving maniacs and all it would do is move the bubble on the badly-hung wallpaper that is this undeniably messed up continent.

Typically, given the ancient nature of the vehicle and the dreadful state of the road, the truck broke down and we were left a couple of kilometres north of the town of Kilbangou. There, I decided enough was enough (I was also fed up of having to hold all of my bags off the floor which was fast becoming a cesspit of goat’s urine and faeces) and set off on foot to see if there were any other transport options. I was accompanied by a guy named John. He was a teacher in Dolisie and was wearing a suit, which would now need several dry-cleans to get rid of all of the dust.

We walked for a couple of kilometres until a bush taxi came along and we flagged it down. The driver had heard about the truck breaking down and had come to poach some customers. So we were driven back to the truck and joined by another five passengers, who had also elected to jump ship.

They did actually manage to get the truck going before the taxi left, but we soon overtook the damn thing and I’m sure it would have broken down a few more times before it reached Dolisie (if it ever reached Dolisie?).

We reached Dolisie in the afternoon. Before the civil war nobody knows about (ten years ago), Dolisie was the retreat of the moneyed elite, a leafy town with beautiful old buildings. The war saw the end of that. It’s still leafy, but the main buildings have been reduced to rubble. John and I headed over to the train station (a dilapidated single-track affair, the main route from Brazzaville to Pointe Noire, the country’s only port) to find out when the next train left for the capital. Not today, not tomorrow, the day after tomorrow. At 7pm. I would get into Brazza on Saturday morning (if the train didn’t derail!). Three days to go 200km. It was time to look for Plan B.

There were no shared taxis all the way to Brazzaville, but some that stopped at the next town along the way, Nkayi. So after a pleasant dinner with John, I wished him well and headed east, once again crammed into a bush taxi designed for x but carrying 2x. I managed to taxi-hop at Nkayi and making it all the way to Modingo, where I spent the night.

I found a little hotel that was listed in the Lonely Planet. It was a little expensive, but I managed to haggle the room down to €15, and then enjoyed three – yes three – showers and then treated myself to a hot bath. It still wasn’t enough to get rid of all of the dust.

I then spent a few hours backing up all of my files on my laptop, just in case it got stolen the next day. Everyone had warned me that the road from Modingo to Brazzaville is notorious for banditry. As events planned out, this would turn out to be an incredibly savvy act.