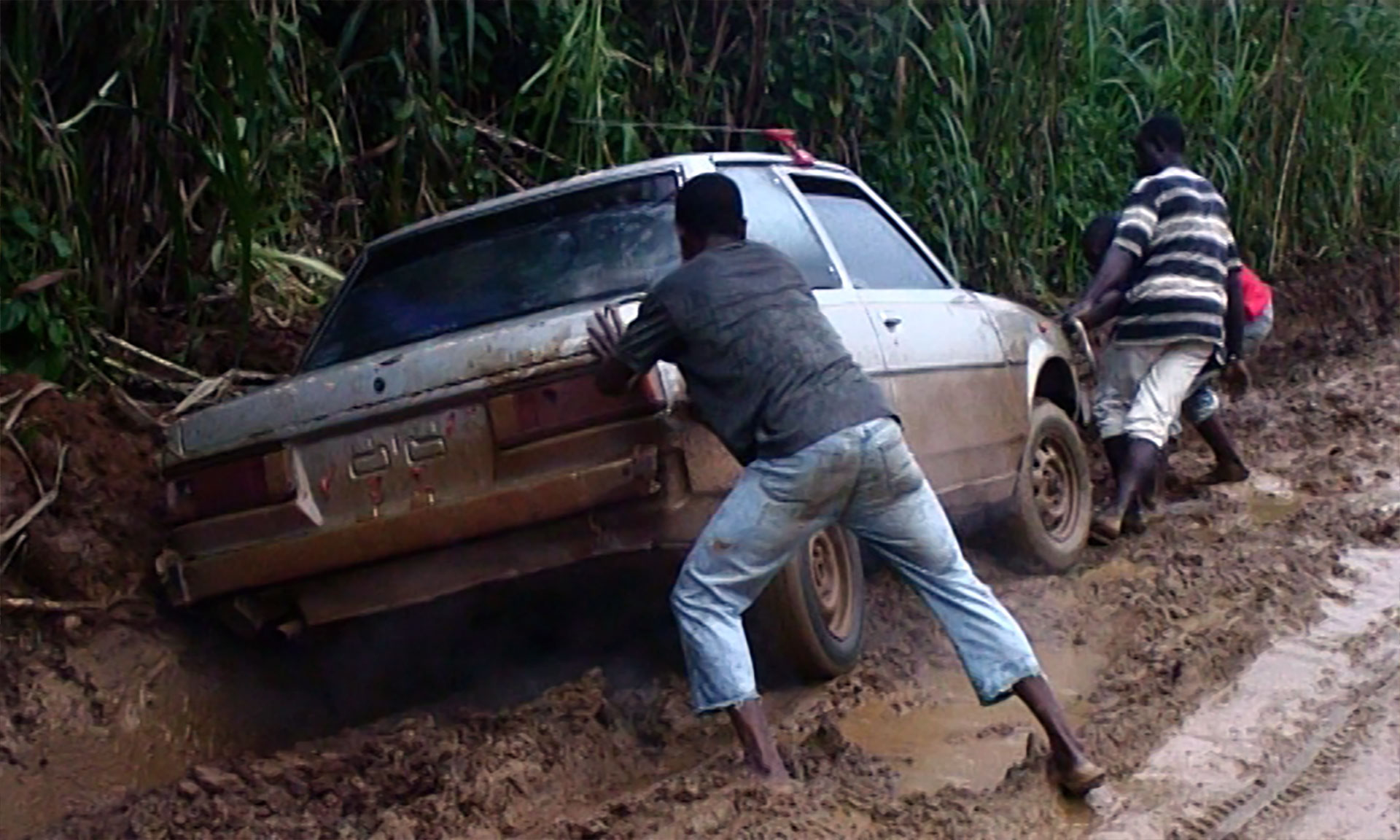 Roland woke me up by firing up his little generator outside the hut. The lights came on and so did the telly. Wow we take electricity for granted. I got up and watched a bit of a bloody awful Nollywood film (Nollywood is the Nigerian Film Industry, the third largest in the world after Hollywood and Bombay, but the less that is said about it, the better) and then I got ready to head down to the docks to catch this mythical boat to Cameroon. But unlike most myths, there was actually a boat. However, it left at six thirty, not seven thirty. I had arrived at seven.

Time for Plan B.

Now, after three weeks of non-stop West Africa, Calabar was a breath of fresh air. Grass! Trees! Pavement! Road signs! Restored Buildings! No Litter! (Seriously!) It looked like what African cities should look like, but don’t because somebody is usually pocketing all of the nation’s cash to spend it on stuffing their faces with jewel-encrusted Faberge eggs rather than making the place look attractive. Or making sure that everyone here doesn’t die before they hit forty. One of the two.

Ooo, and Calabar sported a MASSIVE Nigerian flag (the biggest in Africa! My motorbike guy was excited to tell me), which was ultra-cool. Britain should invest in a MASSIVE Union Flag to fly above Holyrood, just to annoy the Scots.

Seeing as I had missed the boat (in more ways than one), I got a motorbike taxi guy to take me to where the speedboats leave. The guidebook recommends against taking the speedboat option into Cameroon, but I had no probs, apart from the fact that it didn’t leave until after 12, so I was left waiting, having already changed my Nigerian money into Central African Francs, all the while having had nothing but a pack of biscuits to eat all day.

Tell you what though, the speedboat was worth it. Amazingly, they DIDN’T overload the damn thing (they tried as they always do, but the driver actually told a couple of people to get off) and we were all provided with lifejackets. Speeding through the mangrove forests was pure bliss. A network of rivers, deltaring out into the sea, separated by these amazing trees that stand on their roots as though tiptoeing through the mud. Treebeard and his friends standing sentinel over the disputed Bakassi Peninsula region – claimed by both Nigeria and Cameroon.

Even the sporadic rain was not enough to destroy the magic – there was ne’er a ripple in the water, save when a boat passed us by, the occupants enthusiastically waving to the nice ginger man with the silly hat on.

A couple of hours of touring the Mangroves later, we arrived at the Cameroon border town of Ekondo Titi. Sounds like a Japanese skin flick. And, regular as clockwork, there was a problem. My visa for Cameroon had expired and even though the embassy in London had said it would be hunky-dory and that I could get it extended on the border, the border guy did not want to let me in. In fact, he wanted me to get on the next boat (which would now be tomorrow), go to Abuja, the capital of Nigeria, and get a brand new visa. My jaw hit the ground. But… TIA… WAWA… er… dash? Nope. Wouldn’t even take a bribe.

It seems in Africa that you only pay bribes for doing nothing wrong. When you actually need to bribe somebody to get them to help you out of a pickle, they suddenly develop a fit of morality and decide that things are best done through the proper channels. So I waited for an hour for the guy’s boss to turn up. They had a conversation in French, the boss shrugged and stamped me in straight away. Ah, my border guard just didn’t want the responsibly of allowing a scouse into the country. It all makes sense now.

So on to my next adventure… the road to Kumba. Which sounds like… er, never mind. When I’ve been on other road in Africa, people have told me they were ‘bad’, but as with humans and dogs, roads have various degrees of badness. This road was beyond bad: it was barely even a road – more like a 50km stretch of hilariously churned up mud. The only way that I can describe it is if you’ve attended the Glastonbury Festival in a year when it has been muddy and you can imagine trying to drive a 2-wheel drive car with 7 people crammed into it from the Farmhouse to the Stone Circle via the market area without using the metal roadway.

We got stuck in the mud about FIFTEEN times. Seriously. There were people who made a living out of standing at the side of the road and helping push hapless motorists out of the sludge. And please don’t forget that this is the MAIN ROAD to Nigeria. Unbelievable.

At one point, I got out of the car (because it was stuck) and was being physically pushed up a slippery muddy slope of slop by a group of enterprising children led by a kid named Kingsley (who, if I was Madonna, I would have certainly adopted). My ‘Vans’ were caked in mud, which had started making its way towards heaven via my jeans. I was trying to film all these shenanigans, it was night by now and there were no lights to guide my footfalls and so the inevitable happened – I fell over.

In the sloppy mud. Humph!

Now, let me explain something. Over the last decade or so, I’ve been to a lot of festivals – Glastonburys, Leeds and Vs. I’ve attended Roskilde, Donington, Exit, Bangkok 100, T in the Park and Bestival, amongst others. And in over fifty festivals, I have never – never – fallen over in the mud. It doesn’t matter how drunk I am, how crowded the moshpit or how many people attack me for sporting a hilariously offensive flag, it’s just not cricket. And here I am, in the middle of Africa on a Saturday night, Stone Cold Steve Austin Sober, and I go head over heels like a epileptic ice-skater.

In the words of Othello, “Sh*t, Cassio – there goes my reputation down the swany”.

So, eventually – eventually – I get to Kumba at some ungodly hour, but my trials are not yet over. I still have to get to Douala to meet up with Yaz’s brother Hugo who would be providing me with my digs for the night. Yaz is a mate of mine from Liverpool who originally hailed from around these parts. I hopped on a minibus and we arrived in Douala (the road was good) some time after 1am.

Douala was a threatening place to be dropped off in at that time of night. My phone was running low on battery and I was worried that I wouldn’t get to meet up with Hugo, but Yaz’s mate Liberty came to my rescue. He arranged to meet me at the pub (and by jingo, I needed a cold one) and I gorged myself on tasty barbecue meat from the vendors outside while we waited for Yaz’s family to arrive.

It would be 4am before I got to bed, after valiantly trying to get all the mud off my trainers, jeans, arms, legs, face, hands and jumper. Although the only thing I succeeded in doing was to make a big muddy mess all over Hugo’s bedroom. Sorry mate!

Day 35: The Hitch-Hiker’s Guide To The Caribbean