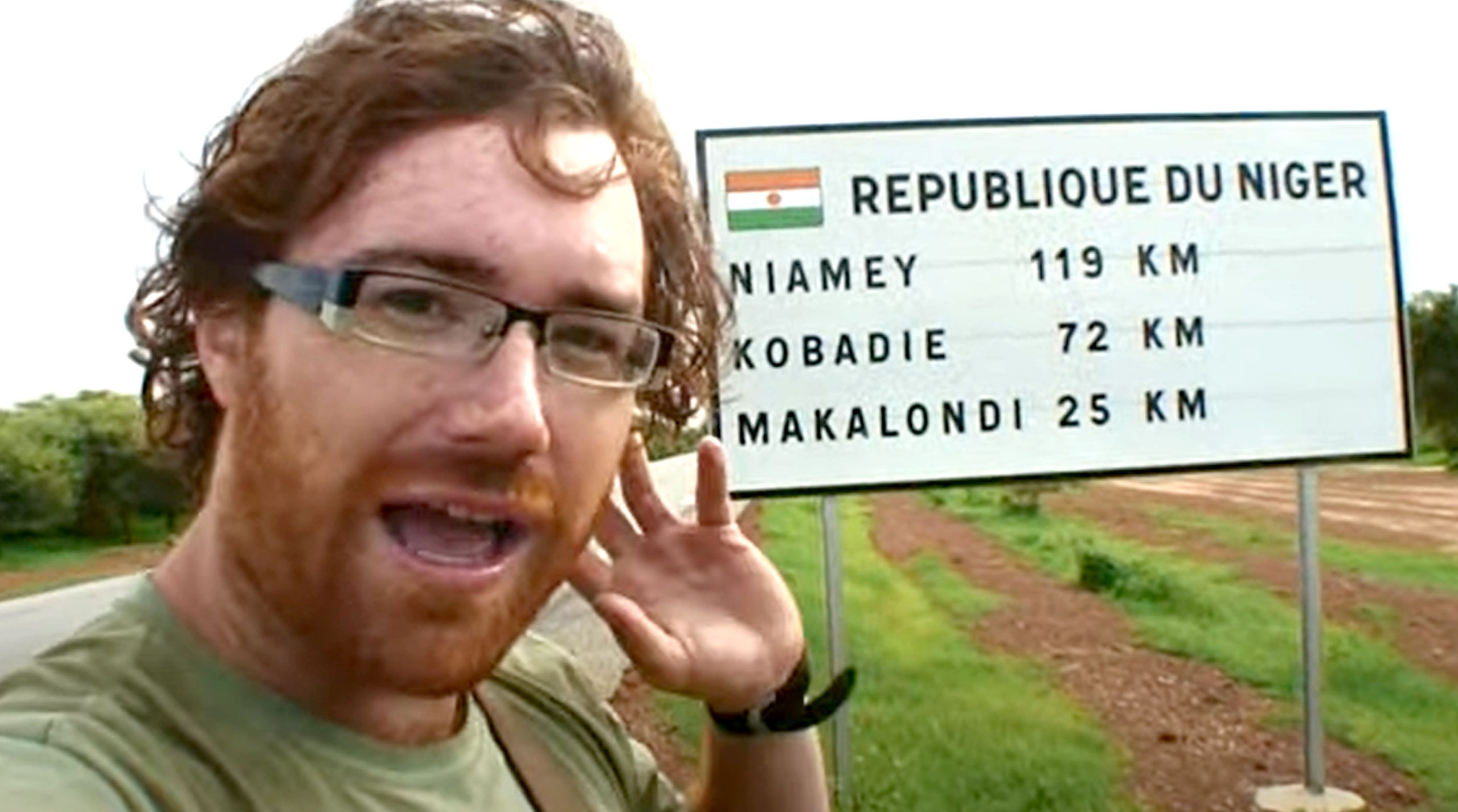 Frederick offered me a lift over the border on his bike, so at the cock’s call, we were hurtling towards Niger at a great rate of knots. There is a good 20km between the border guards and the border runs down the middle, so there was no bureaucratic tomfoolery to cause me problems. Once past the sign welcoming me into Niger, we rode for another half a K, just in case they had put the sign in the wrong place, I got off the bike, looked around for a bit and then we turned around and came back. I don’t know what Niger is, or what it does, but I’ve stepped foot on its soil. A perfect border hop, methinks.

On the bus on the return journey to Fada N’Gourma, I sat with a couple of deaf guys who were from Liberia. One of them was heading to Ouagadougou (best name EVER) to teach American Sign Language to deaf kids there. In just a couple of hours, I learned the signs for British, Australian, Film, Travel, Love, Beer, Whiskey (amongst others) and the entire alphabet. Not bad for a morning’s work. I have to say – signing is A LOT easier than French.

After signing my goodbyes, I had to get back to Benin. I found a minibus that was going to Porga (the village where I had stranded poor Rocco) and hopped on board, but (as always) we hung around for AGES waiting… waiting for what I don’t know, the bus was full, don’t forget that I’m on West Africa Indigenous Time here.

Although getting over the border was not plain sailing, I got stamped out of Burkina, but it was still a good few kilometres to the Benin border post. While I was getting my stamp, the bloody minibus up and left! The rotter! So I had to get another minibus, which got about halfway before promptly breaking down, so I got out (much to the chagrin of the driver who was adamant he’d have the problem fixed in a jiffy, but then they always say that) and got myself a motorbike taxi to Porga.

Once there (and stamped back into Benin), Rocco and I took a couple more bikes to the next town and from there, we jumped a minibus back to Cotonou. I stuffed my face with some grilled meat and paid double to get the front seat to myself so I could get my blog up to date, which I did (almost).

By the time we got to Cotonou, it was 5am. We spent over an hour (by the end of which I was ready to kill, kill and kill again) riding around on the local moron-mobiles (motorbike taxis) trying to find our hotel, WHICH WAS ROUND THE CORNER.

Cotonou taxi drivers are the WORST in the world. They speak not a word of French (the official language), so you’ve got no chance with English. YOU MIGHT AS WELL BE TALKING CHINESE. They do not know what a hotel is, or an embassy, hospital, road or train station. Even when you DRAW THEM A GODDAMN PICTURE.

During the day, the utter ineptitude of these guys is actually quite amusing, but at five in the morning after sitting squished into a minibus for 15 hours, one’s patience is wont to fray…

What they do is ask you where you want to go and after you say the name of the place 15 times, they say yes yes, get on and they go. They don’t know where they are going, they just go. When you finally get them to stop (by screaming at the top of your lungs and clipping them over the head in the style of Basil Fawlty hitting Manuel), they will look at you blankly before doing a U-Turn and trundling off in whatever direction pops first into their stupid little minds.

They took us, at half flippin’ five in the morning, to the CINEMA! Seriously! We wanted La Hôtel Concorde. They took us to the Cinema Concorde. Then, after I threw my hat on the ground and stamped on it, they took us to Hôtel Concordiere. After AN HOUR AND A HALF, we arrived at our Hotel, which was AROUND THE CORNER FROM THE BUS STATION. We could have walked it in five minutes.

AND they tried to kill us. Seriously – I was nearly broad-sided by a car, and Rocco escaped almost certain squishy death on a roundabout. It was enough that he got off his bike and got on another one.

Then (when we FINALLY arrived) they wanted more money. I stuffed the agreed 1000CFA in the guys pocket and walked off. Rocco, bless, stayed trying to reason with them despite my frantic FORGET THEM eyes and hand gestures.

Crikey. It was easier to communicate with the deaf guys.

Day 51: The Other Odyssey