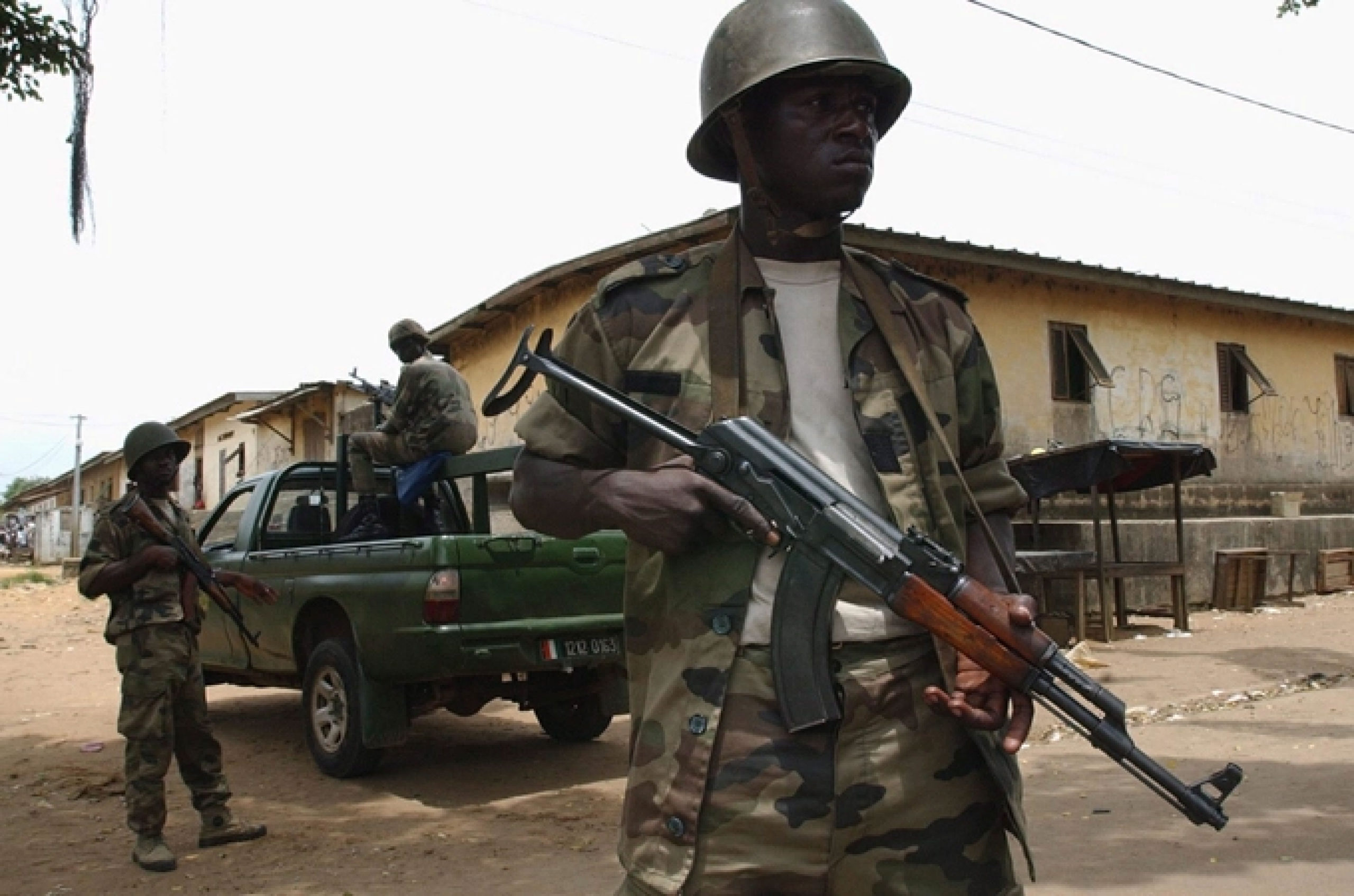 The driver fixed the tyre around 3am and we got into Ganta ten minutes later. I tried to check into a hotel for a few hours, but the cheapest place wanted €25 for a grotty little room that I wouldn’t pay a fiver to stay in even if it came with a Vimto lollypop. I really don’t understand how they can justify charging these ridiculous prices, in a country where most people survive on less than a dollar a day, who the hell can afford to stay there? It’s not like there’s a ton of tourists passing through these parts. Gah!

So I headed over to the shared taxi area, asked them to wake me when the taxi was full and slept in the passenger seat. In the end, it was taking so long to find anyone else who wanted to head on to the border, I jumped a motorbike for the frontier.

Arriving at the border later that morning, I said my goodbyes to Liberia and entered Cote D’Ivoire. A quick lesson in Cote D’Ivoire current affairs: the country is split in two and has been for number of years. The north is run by the ‘rebels’ and the south by the ‘government’, but they are really just two autocratic political parties who wouldn’t know what a free and fair election was if it slapped them in the face with a wet kipper.

ANYWAY, there’s going to be an election in November, upon which the Ivoirians are pinning their hopes to, like a drowning man clinging to a rock. With any luck, one party will win convincingly and the other party will accept the will of the people.

The only feasible border with Liberia is in the Northern (rebel) half of the country.

I got tapped by the guy on the border for 5000CFA (about €7) but I managed to get away with just giving him 1000. The bloody visa cost me $75 so I wasn’t in the mood for being generous. Then I had to try to get to the next town. Ha. Not easy. There were less people at the border than there will be at Gary Glitter’s funeral. I eventually – after MUCH haggling – got a motorbike taxi to take me to the next town. West Africans do not have much in common with their North African counterparts – they have no concept whatsoever of the joy of haggling. They just fire an outrageous price at you and then stick to it no matter what, even if it is transparently une-tax-anglais.

So I climbed on this motorbike and blimey – I thought the road was bad on the Liberian side. This was more like the obstacle course from ‘Junior Kick Start’ than the main highway between two nations. We made it through the first several checkpoints (one every kilometre, seriously) without incident, but then about halfway to Danané the police pointed out that the back tyre was flat and so the driver went off to find a mechanic.

Getting tired of waiting, another motorbike taxi came by and the police suggested that I get on the back of it. The only problem was that there was already a rather large lady passenger. By now, my behind was already hurting pretty badly but after a quick argument between my original driver and this other guy, I was sitting behind this lady on the metal luggage rack, carrying all my bags which were as heavy as hell. Every time we went over a pothole, I winced. And there were a LOT of potholes. It wasn’t until later when I got to the hotel that I realised why I was in so much pain… I had two HUGE ant/spider/snake/something nasty bites on my bottom.

But for now, I just had to grin and bear it.

I got to Danané around 3pm, keen to press on to the capital (in all but name) Abidjan. I was told that there was a bus going at six, and was mighty excited. Then I found out that it was leaving at six in the morning. Normally, I would find some other way of getting on, but hell, I’m in a rebel-controlled bit of a country. I thought it best to wait until morning.

The guy at the bus station was incredibly helpful. He sorted me out with a ticket and took me to the hotel down the road in the bus! He chatted with the hotel owner and got me a really good price. Top bloke!

I should mention at this point that Lonely Planet have sent me a new camera op. His name is Rocco and while I doubt he will be as sexy as Laura, I’m sure he’ll do a good job. The thing is he’s in Accra, the capital of Ghana. He arrived today. I’m kinda a little off schedule because I didn’t breeze through Guinea as quickly as I had hoped, so I could catch the Sierra Leone embassies before it got to the weekend. I wanted to arrive in Ghana tomorrow night, but now that I’m staying in Danané, I guess I’ll be getting in on Saturday.

I also intended to spend this afternoon catching up with my blogs and maybe – maybe – actually getting some video editing down. As it was, I sprayed a ton of liquid Germoline on my oh-my-god-my-skin-has-gone-black bum bites, winced so hard there were tears… then fell into a deep and peaceful slumber. Night night!