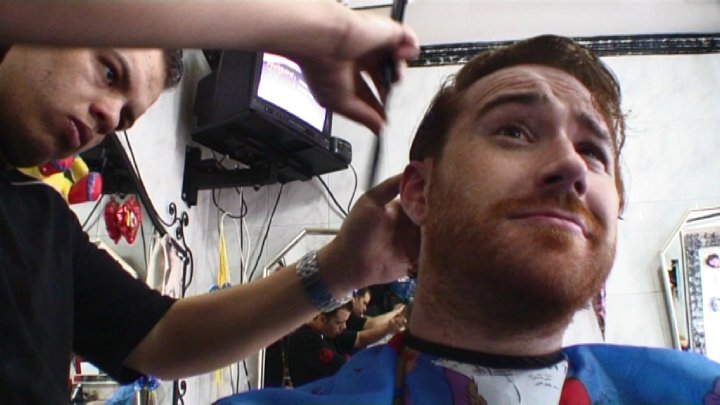 Now I know how Ilsa felt. But at least she had Rick to save the day.

I arrived in Rabat at 5am. I tried to get my head down in a hotel, but they were all full. So I sat in a café drinking coffee and writing up my blog. Eventually it was time to hit the Mauritanian embassy and get a visa into their infernal country.

Outside the embassy, I got chatting with a few others in the queue who were trying to get a visa. They reckoned it would take two days to come through.

No Luke, I am your father…

Oh, for the love of…

Racing to get the form filled out, I got my application in (second! – not bad considering it was all in French) and they said to come back tomorrow at 12 noon. I tried and tried to bribe them, but they weren’t having it (why is the day that I show up, the day that everyone in Africa turns into Serpico?).

So I vowed to do some housekeeping chores that are way overdue. I headed into the Medina and I got the rips in my jacket mended, bought a new bag for my camera and GOT MY HAIR CUT.

Shorter than it has been since 2002. Whoosh! I’m telling you – it’s knocked five years off, I reckon. I’m going to try it out tonight in Rabat; see how old the locals think I am. If anyone says 30, I’ll eat my hat.

Meanwhile, poor old Matt is stranded in Dakar, Senegal, awaiting the presence of yours truly-stuffed here. But he’s made a new friend called Mentor (Odyssey reference ahoy!) who is going to help with getting me on a boat to Cape Verde next week.

I hope. Lorna Brookes is also on the case. Fingers crossed they can pull something amazing out of the bag and get me on the banana boat to only nation state of the Atlantic Ocean.

The rest of the day I spent mooching about (the rather wonderful city of) Rabat, buying stuff at the medina, eating yummy food, drinking coffee and editing videos. That night, I watched a footy match between Morocco and Tunisia with the locals – it was one-nil Morocco until the last bloomin’ minute before the Tunisian’s pulled one back. Bah! After all the excitement of that, I crashed out early. Rabat gave me a chance to chill and recharge the batteries, but that was something I was hoping to do in Dakar!

Tell you what though, it’s days like this – days that I spend pretty much on my own, but where I chat to a ton of locals – that I really enjoy myself. It’s only when I’m back in the hotel room and thought turn homeward that I find myself pining for a Jacob’s Cream Cracker with a huge chunk of cheese on it whilst playing sweary Scrabble with Mand and watching House on the telly. I know that sounds ridiculously pedestrian, but a break from just DOING STUFF ALL THE TIME would be a wow for me right now.