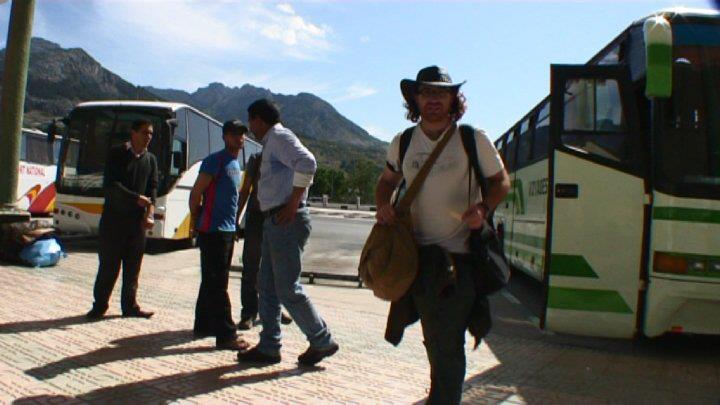 The plan was to get the 7.30am bus to the coast. However, however, however… we got a taxi to the southern bus station (a good bet as we where heading due south!) but the bus to Algeciras wouldn’t let us on, and then drove off while we were trying to buy tickets from the CLOSED ticket window!

It wasn’t until the information post opened at 8am that we discovered we were (once again) digging in the wrong place! – The bus left from the Eastern bus station (silly Graham), so wasn’t picking up passengers from our bus station (well, he could have given us a lift, the big meanie).

The next bus for the coast wasn’t until 10am – I really could have done with those extra three hours of beddy-bo-bo’s. Oh well. Matt and I sat off drinking coffee until we were whisked away down to the Mediterranean. There are more boats to Morocco from Spain than there are pregnant BBC weathergirls, so within the hour we had arrived in Ceuta, a Spanish enclave in Morocco (opposite Gibraltar, pop-pickers!), which makes up the African side of the Pillars of Hercules.

We took a taxi to the border, and from there we headed to Tetouan for the bus to Casablanca.

It would be here that Matt and I would say our farewells – he had to organise a visa for Senegal (no such necessity for Mr. EU citizen here) and would fly to Dakar and meet me there – I would overland it through the Western Sahara and Mauritania. I met an incredibly chatty Moroccan girl called Fatima on the bus, and (unusually for these parts) she was happy to be interviewed and give her opinions on modern Morocco and the treatment of women here.

Fatima and I shoved Matt in a Taxi and sent him off into the night (this could be the beginning of a beautiful friendship) and we continued on our bus – Fatima to Seltat and me all the way to Agadir – I would arrive at 7am tomorrow morning.