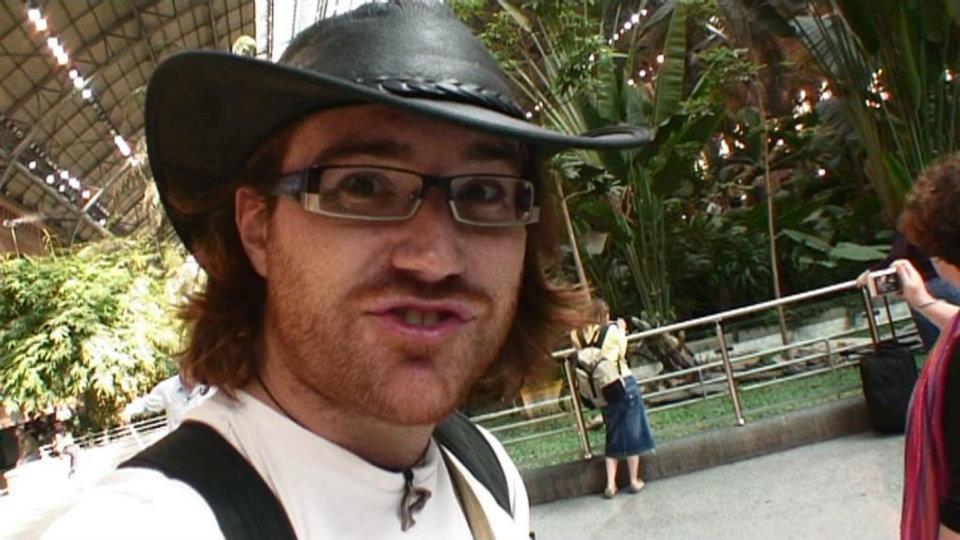 After last night’s antics, I’m surprised I stayed awake. Matt and I jumped on the mega-mega fast train to Madrid (300kph! – whoosh!) and I drove him up the wall with my crap jokes and constant spouting of my random brain garbage. Madrid train station is BEAUTIFUL – old school golden age of steam with a tropical garden in the middle of it. I could have stayed all day, but we only had time for a coffee before hopping on another mega-mega fast train to Seville. We were there before you could say Jaffa Cakes.

Now, Matt – top bloke, wouldn’t have a word said against him. However, talk about throwing someone in at the deep end – he hasn’t travelled much (just Oz and New York) and in a few days we’re going to be ankle-deep in West Africa – the poorest and (arguably) the nuttiest region of planet Earth. With even less French and Spanish than me, I just hope he doesn’t get himself into a poker game with the locals and end up in a bath of ice missing a kidney or two…

Welcome to the world of squat toilets and no bog roll, Matt, hope you’ve been working them calf muscles! Ah, don’t worry – if he sticks to the most important two rules of travel – WALK WITH CONFIDENCE – he’ll be fine.

Anyway, Seville – orange trees, boulevards… mmm… Andalucía – one of my favourite places on Earth. After the North of England and Victoria, I’ve spent more time knocking around here than anywhere else… with dirt cheap Easyjet/Ryanair flights and that Moorish/Tapas vibe, how could I not?

Matt and I headed over to the bus station and hopped on a bus to Huelva (arriving at siesta-o’clock, the place was like a ghost-town) and then grabbed a local bus to the border town of Ayamonte – the very southern point of the border between Spain and Portugal. There we jumped a taxi for my final border-hop of Europe. Our driver took us over the bridge that separated the two old rivals – a bridge that spanned hundreds of years of conquest and bickering, a bridge that joined the chaps behind the Armada to our oldest ally – if memory serves, there’s a whopping 900 years of no armed conflicts between the Portuguese and the British. Stick that in your pipe, peaceniks!

However, with 700 irregular verbs (according to the delectable Ms. Golightly), I don’t think I’ll be adding Portuguese to my embarrassing small repertoire of languages that you can select from my ginger bonce anytime soon.

After stomping around on Portuguese soil for a few minutes, we returned to Spain. Our driver then took us up to the Panoramic view of the river, which was cool, before dropping us off near the bus station to re-supply and grab the bus back to Seville.

Arriving after 10pm, we checked in to a hostel, dumped our bags and headed out for some boozy booze. Matt’s on the wagon, so he had the honour of staying stone cold Steve Austin and watching me get drunk (much in the style of University-Era Michelle ‘He’s only embarrassing himself’ Robinson).

Actually, the cerveza was a bit pricey, so I didn’t get blotto, but we did manage quite a nice impromptu pub-crawl (necessitated by the fact that every place we got to was closing when we arrived). Good vibe, though.

We (somehow) found our way back to the hostel around 2am, and I would have happily spent the rest of the night chatting to the girl in reception who looked like a Spanish Rachel Leigh Cooke but the knowledge that I had to be up in four hours tempered my desires — I was asleep before my head hit the pillow.