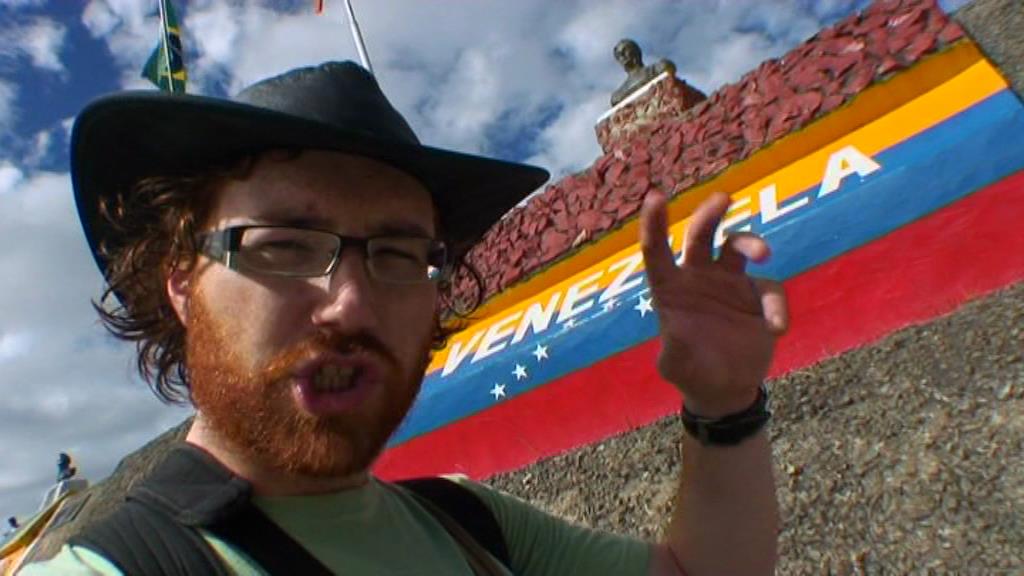 Woke up in Mario’s house. His family had been so accommodating, taking in a big ginger stray like me for the night and looking after me on my trip through Venezuela. I can’t thank them enough. I headed back to the bus terminal and jumped on the first bus to Santa Elena on the border with Brazil.

Oh, you might be looking at the map and wondering why I can’t just enter Guyana from Venezuela. I wondered that too. Well, that would be because Venezuela for some god-only-known reason thinks that it owns half of Guyana. Yep – it’s marked on maps and ‘Land to be Reclaimed’!

On the bus, I got chatting to a wonderful old dude called Francisco. He was 81 years old, his parents were from Trinidad, he was born in Venezuela, his wife was from Grenada and he now lives in Washington DC, where he will be selling flags for inauguration day next week. He reckons five million people are going to turn up. A good day for flag sellers – a great day for mankind. I only wish the incoming President got to ceremonially kick the outgoing President up the behind with a pointy shoe.

So we headed up into the Grand Savannah – an area of Venezuela filled with vast flat mountains – tepuis­ – like gigantic loaves of bread or Ayres Rock grown by several hundred miles outward. Covered in grass, these vast plains-on-top-of-mountains are the home of the Angel Falls, the highest waterfall in the world – 16 times higher than Niagara. The only way to see it is to fly or hike for days, so it’s not on my itinerary this time.

The driver was powering along the road like a man possessed and I thought I was making good time.

But Venezuela had one last trick up its evil little sleeve – the border closed at 7pm. I got there at 7.15pm.

So not only could I not continue to Boa Vista in Brazil for an early start on Guyana in the morning, I had to stay on the border in an overpriced prison cell, sorry, “hotel”. The shower was cold, my room smelt of turnip and thank god mosquitoes don’t like me much or I’d be downing the quinine like a man possessed.

Damn! Why does this keep happening? If the border closed three hours previously, it wouldn’t be so frustrating.