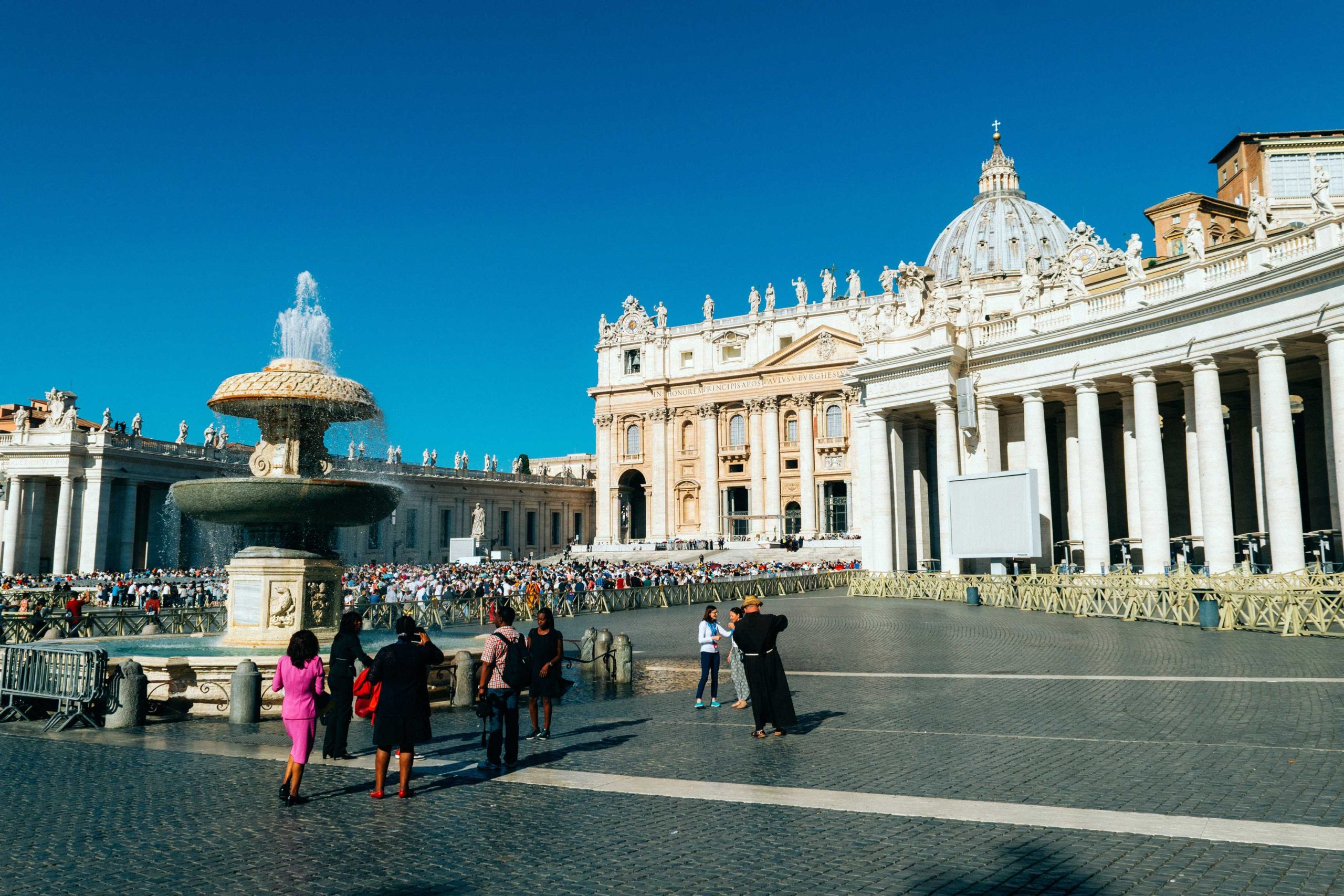 And so on to Rome…

I arrived at some ungodly hour, which I thought was actually quite appropriate. I slung my bag into the Pop Inn Hostel (with crazy guy Cesar running the joint, I warmly recommend it – it’s right by the train station too), and hit the streets – I had to step foot in Vatican City tonight.

And so, I found myself walking through Rome with my heart on a string, dear god, please help me. I’m so very tired of doing the right thing…

It was past midnight when I got to Popesville and there I found that the entire Piazza di San Pietro was cordoned off. No public access tonight, young Hughes, you atheist dog. Oh well, might as well see if there’s a back entrance (I would expect that of the papacy, wouldn’t you?). So I set off for my first (and possibly last) lap of an entire nation – a nation with its own flag (yellow), bank (corrupt), leader, and even its own army (kinda), although when I did manage to find a Swiss Guard to have a natter with, his costume made me wonder if he was a proper bodyguard for Zeus’s god’s shiny-coated representative on Earth, or had just come back from a spectacularly unsuccessful fancy dress party.

Anyway, he wouldn’t let me in – not even one foot! Private property, apparently. Ah well, the Piazza opens at 7am and my train leaves at 7.20am – bags of time. Mr. Willy-hat hasn’t seen the last of this little ginger wanderer.

But as I had already started, I thought that I might as well complete a lap around the place and OH MY GOD it’s a bloody fortress! Seriously, round the back are like, fifty-foot walls (from which boiling tar was no doubt thrown in times past) – although, forgive me for saying this (if you’re a forgiver!) but it all smacked of insecurity to me…

If my best mate was the chap what had the power to conjure up an entire universe (all 100,000,000,000,000,000+ galaxies of the bugger!) out of THIN AIR, I wouldn’t be hiding in a fortress like some kind of balloonless Bowser, I’d be sunning it up on a beach in Thailand, laying in a hammock drinking coconut milk, safe in the knowledge that no lightning, tsunami or assassin’s bullet would ever come anywhere near me BECAUSE IT WAS MY MATE WOT MADE THE UNIVERSE!

But that’s just me – you can probably guess that I’m not one for pan-dimensional super-beings from beyond the stars. All seems a bit… well, you know… silly. I’m especially unimpressed by the ones who sit there picking their nose while the disease-ridden, flying hypodermic needles they invented (fancy that!) kill millions from malaria, dengue fever, Japanese encephalitis and elephantitis and other horrific diseases I couldn’t hope to spell unaided.

Incidentally, did anyone see the pope stuffing a message to his god in the wailing wall this week? I couldn’t help but imagine a kid stuffing his letter to Santa in the letterbox…

I walked and I walked – around the Vatican City (I’ve never strolled around an entire city before, never mind a nation!) and down through the streets around the Pantheon and to the Coliseum. I didn’t want to sleep. The night was fresh, the streets were empty – save for the rumble of the occasional car on the cobblestones. A city unspoilt – a city where I saw no multi-storey carparks, no 1960’s concrete shopping malls, no heartbreaking highrises, no disgusting office towers set to depress, no beautiful buildings left to rot, no revolting hotels made of grey solidified slop…

The curse of the latter twentieth C may be hiding out on the outskirts, but here, tonight, in the centre of Rome, all I saw was stone and wood and clay – and the beautiful epic decay of centuries, as the pillars of stone and sun-baked bricks slowly eroded their way back to the nature from whence they came.

Something that concrete can never do – age gracefully.

Not Britain then. Not Liverpool, London, Leeds, Manchester or Brum. The one place on Earth seemingly unbewitched by the twentieth century nightmare of concrete, glass and asbestos. Of that rat Le Corbusier’s fascist conceit – machines for dying in.

But no, it’s all 30-year lifespans, Vegas-style, for the rest of humanity, like I’ve already pointed out – we didn’t rebuild the twin towers – disposable buildings for a disposable land-filled age.

So what are we leaving our grandchildren, eh? What wonders? What sights? What art? What BEAUTY? NADA. A handful of good tunes, some good books, some decent films, some cool television shows – but nothing permanent. Nothing to say LOOK KIDS – WE WERE HERE; only what is downloadable. The entire output of a generation, squeezable onto a 2.5″ hard drive.

The Queen, on the turn of the millennium, lighting a torch with BRITISH GAS emblazed on the side in a costly DOME designed to last less than a decade.

Forget that, I say! When 99 became 00, I was at the pyramids trying to connect our glorious part (OUR past! We killed all the Neanderthals! We’re the only race of humans left on this planet!) to some kind of glorious future. But now, ten years on, all I can see is a future that will be all but forgotten in just a few centuries time. The great age of nothin’ doin’, the second coming of bread and circuses.

Sorry, we were all too busy watching soap operas…………

And what are we building in England now to show the grandkids? A big white horse!

To paraphrase top designer Scott Jones, that’s something a child would think of…

We really need to get a grip. Buildings are the most public of artforms, the reason people fly thousands of miles across the globe to Rome to Giza to Agra to Machu Picchu. But even in our daily lives, we HAVE to look at the damn things, whether we wish to or not, they barge their way into our daily life without asking. It should be against the law for them to depress the hell out of us.

The least we should expect is that (if we listen carefully) they don’t sound like two women comparing bargains. Well, I got my glass curtain from TX Maxx – guess how much, go on guess…

Rome, you are beautiful, you will always occupy a special place in my heart, but I’ve been walking for over three hours and it’s getting light. The Coliseum towers over me, mocking my disposition towards modernity. Look what we cobbled together, Graham, WITH OUR BARE HANDS – before pneumatics, before electricity, before JCBs, before AutoCAD, before 3D printers… Two THOUSAND years ago, Graham, LOOK!!

Hahahahaha! Go on – beat THAT!

We can, but we choose not to. Like Dash purposefully running slow in the school race.

We could be Incredible, but we choose to be pedestrian. How sad.

I turned my back on the stadium, half broken but still breathtaking. This is a battle I fear I’ll fight all my life, but don’t worry – it’s not all hot air. The masterplan is kicking in – and my little black book Development Hell is safe in the hands of my girl in Australia. I’ve still got a long way to go this year, but that’s nothing to the roads I plan to travel this decade.

I got back and checked the GPS to see if the border hop to the Vatican had been successful – no, I couldn’t claim it, I really couldn’t – the barrier was DEAD ON the border. Showed my walking route around the walls quite well though. I’d have to go back in the morning (well, three hours time) and do it properly.

6:40am: Back to the Vat in record time – I ran around St Peter’s Square (it’s not square, but I don’t know what else to call it) and then back into the taxi and onto the train for Sicily.

There to meet Laura who had flown over from Liverpool to film me for a few days for the TV show (oh yes, the ink is finally dry!).  Perhaps after not seeing my Mandy for a good 128 days (and nights), the last thing I needed was a hot Irish chick following me around with a camera and her pants slung low, but by Jove it was good to have a mate from home to keep me company for a few days – especially one, like all my favourite people, who doesn’t put up with my crap.  It’s easy to bamboozle a stranger into thinking you’re the coolest thing since lightsabers, but people who know you and are prepared to sling it straight backatcha (not shackled by but-we’ve-only-just-met politeness) are the ones for me.  Keeps me on my toes, the old debater in me, as anyone who as witnessed Sunday Lunch In The Hughes Household will attest.

So when I arrived in Catania, it was a great relief to see a familiar face (and a familiar camera – Hi Z1!) waiting for me at the train station.  We had a few hours to kick around before the ferry left for Malta (mmm – ferries!) so we grabbed an ice cream and I got to muse about how normal this all felt.

From a third person perspective I’m sure it’s really quite nuts – here’s me on my mad mission – the mission I’ve dreamed about my whole life – in country number 78 (of 200) having made my way from Uruguay via every country in the Western Hemisphere and (almost) every country in Europe.  I’m being filmed by mate from back home for an 8 part television show about, well, me, which is being produced by Lonely Planet, has been commissioned by National Geographic and will be distributed by the BBC.  The only guidebooks I use, one of the three magazines I subscribe to (along with Empire and Viz) and the only television channel I actually respect.

From that perspective, you can probably understand why it’s bizarre that any of it feels normal.

But as long as I’ve still got my hat on (to contain my big head), it’s another typical day on the road for me. We caught the ferry and were in Malta before you could say fizzwizz.  The taxi driver in Valetta, the capital, gave us a host of great info on the history of the island (including the fact that it’s not a Maltese Cross on the flag, trivia lovers, it’s the George Cross – awarded to the ENTIRE ISLAND for it’s indomitable spirit and huge sacrifices made during the war).

Valetta is beautiful – a fortress town, hilly, cobbled and sandstone.  Tonight it was quiet – was there anything to be gained by hitting the streets?  Possibly, but I was exhausted after Rome and we were getting the Ferry back to Sicily at some crazy-early hour of the morning.