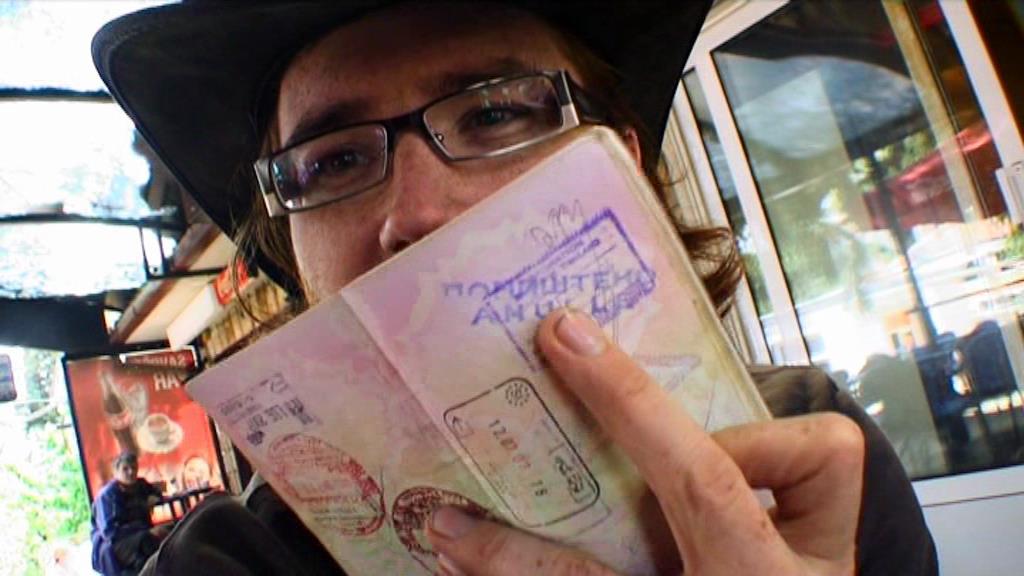 What transpired to be an incredibly long day, started in Thessaloniki before dawn. It was raining hard and John and I took far too long getting off the train, so we found ourselves shunted into the goods yard and having to walk the five-hundred meters back to the station like a pair of divs.

I had a few hours to mooch about, say hello to the Aegean Sea and drink an overpriced coffee (I needed the toilet and McDonald’s was closed) before returning to the station to hop on the train to Skopje (pronounced Skopia, by the way). Incidentally, on the off-chance that the girl from Canada with the hotpants – whom I helped get the coach to Athens because no domestic trains were running – is reading this, when you ask for somebody’s help and they give it, try saying thank you next time, then people won’t think you’re a cow.

Skopje is the capital of Macedonia, or to give it it’s full crazy title, The Former Yugoslavian Republic of Macedonia (keeps the Greeks happy) and the train was supposed to be a two hour affair – just enough time to grab a coffee and attempt to watch Lost on YouTube.

HOWEVER, the Macedonian border guards had other ideas and soon I found myself waiting in a freezing cold doorway with a fellow unfortunate (an American called McClane who was also heading towards Kosovo) because we were Johnny Foreigners and they wanted a doctor to come and make sure we weren’t dying of the bubonic plague, or swine flu as they are now calling it.

The train left on it’s merry way to Skopje without me – the next one wasn’t for five hours – and so after a doctor came and asked me if I was dying (the answer was no), we had to go and get the bus to the capital. Which was annoying.

But what was good was the fact that there was a bus to Prishtina, the capital of Kosovo, pretty much ready to go as soon as we got into Skopje. I just had time to stuff a burger-and-fries-in-one-huge-bun into my mouth before jumping on the bus and getting Kosovo ticked off my list of countries that aren’t really nations, but I’m counting them as nations because I like nice round numbers.

Arriving into Prishtina, I was then dropped into a little bit of a quandary. I bought a ticket for the bus into Serbia, but the driver wouldn’t let me on. Luckily, an American KFOR guy was on hand to translate the situation. Serbia doesn’t recognise Kosovo as an independent state and since I entered ‘Serbia’ (ie. Kosovo) from Macedonia, the guards on the Kosovo/Serbian border will want to know how on Earth I managed to enter ‘their’ country without getting a passport stamp and consequently not let me in.

Confusing I know, but the upshot of this was that there was no way I could get on the bus to Serbia.

Never fear though – as long as I’m not trapped on an island, there is always plan B. I got the bus to Montenegro instead.

The bus dropped me off in a nowhere town in Montenegro called Rozaje in the middle of the night and I waited in the freezing cold (it was comparatively warm in the northern Europe) for the late bus over to Belgrade in Serbia. I got through the border control okay – the only funny thing was that the Serbians stamped “Annulled” in Cyrillic over my Kosovo stamp – kind of childish when you think about it, but there you go – you go around ethnically cleaning areas of your own country, you can’t really complain when they decide they don’t want to your mates any more.

Strangely enough, they also ‘annulled’ a stamp from Thailand that was put in my passport three years ago.

This event has obviously meant that Thai-Serb relations are at an all time low. Or maybe the guy with the stamp was just having a really groovy time STAMPING THINGS. WITH HIS STAMP.

I got off at the first town over the border, Novi Padar, only to find they had not dropped me at the bus station. It was now 1am, there wasn’t a soul around and I didn’t really have a clue what to do. Luckily, a battered sign pointed the way to the bus station, so I started walking. It was a good kilometre away and when I got there, I was greeted by a nothing but sleeping tramp, who promptly farted so loudly that the walls shook.

Luckily, a bus soon pulled in – I asked the driver if there was going to be any more buses back to Montenegro tonight. He didn’t speak much English, but I got the impression that there were no more stopping at the bus station tonight, but if I went back to where the bus I was on had dropped me off, I could flag a passing coach down from the road. My gesticulation skills are currently at an all-time high.

I walked back, pursued by stray dogs, and waited in the dark beside a huge puddle on the main road. Would I be waiting here all night? Will it ever stop raining?

After twenty minutes, a bus came by. The sign in the front said ‘Podgorica’, the capital of Montenegro. I practically threw myself in front of it just to make sure it stopped – and it did. I’ve haven’t been this relieved since I found out that everybody else on the planet finds bananas as hilarious as I do.

Day 457: The Land That Time Forgot