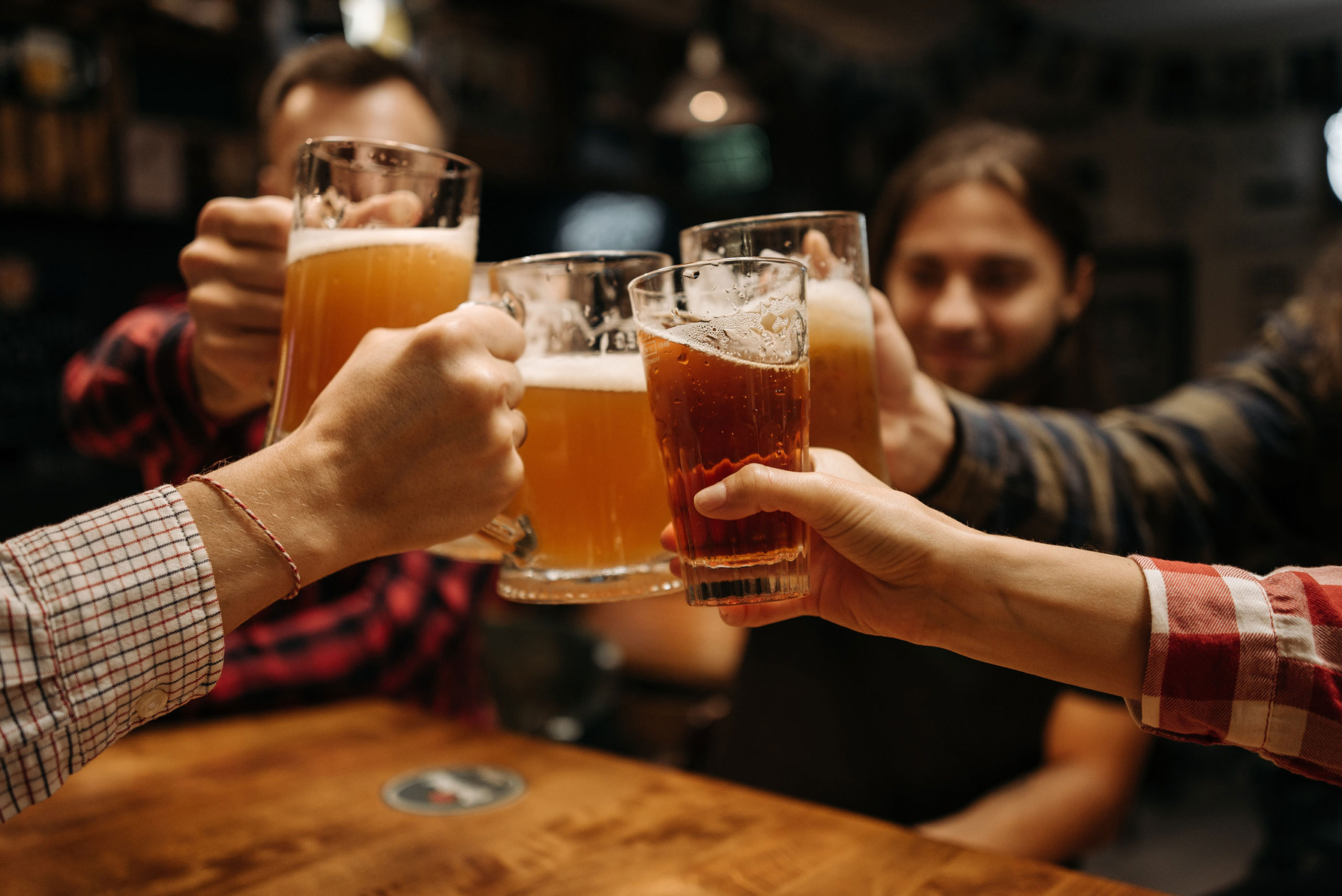 Today really started last night when I was met by my top chums from the old school, Lindsey and Michelle, in Euston Station. We only had twenty minutes before my train left for Liverpool, but they bought me a carrot cake and a coffee and laid out the welcome mat for me. I was home. Back in the UK, back in the UK.

My train pulled into Liverpool’s Lime Street Station at 10.20pm and the welcoming committee was amazing. About thirty of my mates, plus my mum, dad and brother Alex, all cheering and waving flags (thank you Steve!) for my arrival. It was just awesome. I was shaking – like a teenager waiting for a phone call from someone they fancy the pants off.

We headed inevitably pubwards and before we knew it we were back in the Heebie Jeebies, back where I belong. Everything went so fast it was all a bit of blur – I treated myself to a (much needed) shave in the middle of the courtyard and changed into fresh new clothes. Hugh took my dad to the Blue Angel (hilariously) and I got to sit down with the people I like best and enjoy the delights of the famous Heebs’ £1 bottles of Stella.

After everyone who had work in the morning slowly drifted away to bo-bo’s, the more feisty of us headed up to the Magnet for a bit more booze and a (bizarre but very welcome) dose of KILLING IN THE NAME OF. Duh duh DUH! Around 4am, we staggered over to Scott’s flat as everyone tried to get at least an hour’s kip before we had to be at James Street Station for 6am. I don’t know about anybody else but I didn’t actually get to sleep, too goddamn excited!!

The plan was this: To hit all Five Nations of Britain and Ireland in less than 24 hours without flying. Liverpool to Holyhead to Dublin to Belfast to Stranraer to Manchester to Liverpool.

So in the wee small hours Laura, Hugh, Scott, Stuart and Matt accompanied me to James Street Station where we met up with Leo and jumped on the train to Chester.

At Chester train station, I met with top mate Lucy who was on her way to work (small world eh?) and then the magnificent seven of us all bungled our way onto the train for Holyhead in Wales. Our hangovers started kicking in at this point, but we weren’t going to let them get away with it. A swig of whiskey was all I needed to get back on track, although I did crash out on the ferry from Holyhead to Dun Laoghaire.

A quick introduction to my friends at this point is in order.

Hugh! Hugh is an old school chum, although being in different classes (I was in R, I think he was in P – (which, when I was 12, obviously stood for Perverts, Poofs and Paedophiles) we didn’t really hang out much until sixth form. But Hugh’s prowess in the Krazy House moshpit was one of which I’m still in awe of, and, like me, he’s one of those people who say yes to everything, no matter how bananas. If I wake up somewhere in Liverpool and have no clue where I am or how I got there, chances are I’ve been out drinking with Hugh the night before.

Matt! Matt is an old mate from uni – originally hailing from Belfast. We shared digs in third year, one of the craziest years of my life, when I tried my hand running for General Secretary of the Student Union (a sordid tale of racism, homophobia and anti-Semitism run amok which resulted in me turning my back on politics until the day I have no heart left to corrupt).

We once teamed up for the weekly uni debate to argue for giving Northern Ireland back to the Irish. Matt argued on the grounds of history, geography, the potato famine, Oliver Cromwell etc; I argued on the grounds that the Northern Irish are a bunch of whinging layabouts whose sorry contributions to the world included The Titanic, The Cranberries and the DeLorean fiasco and we British were better off without them (although the DeLorean could go back in time, which was pretty cool).

We won the vote and, surprisingly, Matt still spoke to me afterwards.

Leo! Leo swaggered into my life by marrying my cousin – they met backpacking in Australia. Originally from Dublin, he’s not only exceptionally witty, he’s a top webmaster, he plays every musical instrument under the sun and was the main character in two of my shorts, Day of the Jackanape and The Censor. I think if this were the 1800s, one would refer to him as a polymath.

Good ol’ Leo is head honcho here at theodysseyexpedition.com; his job at the moment pretty much revolves around removing all the swear words from my blogs so that they’re kiddy-friendly. The crafty butcher.

Stuart! Mand and I met Stuart way back in the heady days of 2003. Although terribly posh for someone who grew up just over the river Mersey, he’s got a heart of gold and a marvellously warped sense of humour.

He was looking for video work, so was I, and we decided to combine forces. This worked out quite well, with cameras, tripods, lights, mics etc going back and forth between us as necessary and we soon moved into an office together on Dale Street, which happened to be next door to…

Scott! Scott is the top graphic design genius behind the covers of some of the biggest selling albums of the last five years, including The Arctic Monkeys. You really wouldn’t guess that he’s from Wales. He heads up Bad Format!, a design company that looks set to take over the world. Together with Hugh, Scott is responsible for some of the more hilarious scrapes I’ve found myself in over the last few years. He designed the logo for The Odyssey.

Laura! Laura is a fellow video director who burst onto the scene back in 2007 whilst I was in the midst of The Beer Vortex (a three-month long beer and couchsurfing experiment). We met in the Jacaranda and she’s followed me around ever since. Obviously, being a happily married man (kinda) I have done all I can to shake her off, but she still follows me about, looking exceptionally foxy and usually clutching a video camera. Like me, she’s hopped on the Lonely Planet gravy train and they’re paying for her to film my UK shenanigans for the TV show.

Like Matt and Leo, she’s Irish, so we had the full complement of British and Irish nations covered, if you count my ginger beard as Scottish.

On our arrival in Dun Laoghaire, we had five minutes to get off the ferry and catch to the train for Dublin, or the whole plan would have gone out the window. So we ran like lunatics through the ferry terminal, slap bang into an Irish copper who wanted to know why we were filming ourselves running through the ferry terminal. We spluttered out an excuse about being students or something, flashed our passports (which must have proved we weren’t in Al-Qaeda) and continued running for the train.

At this point we lost Stuart, much in the style of The Adventure Game, and he was forced to walk home on his own. And then there was six.

So the Dirty Half Dozen continued on to Dublin railway station and then onto another train to Belfast. A couple more drinks and we were in fine fettle. It was about 4pm, we had 90 minutes before our ferry to Scotland, plenty of time for a swift-half. But, unbeknownst to us, six months ago Stena Lines had elected to move the ferry terminal from quite close to the railway station to THE FAR SIDE OF THE MOON!

After walking for what seemed like days, we wound up at the Ferry Terminal with only ten minutes before the damn thing left. So no Guinness in The Crown for us! Bah! At this point, Leo teleported out like a self-aware redshirt and then there were five.

So the Famous Five jumped on the ferry over to Stranraer in Bonnie Old Scotland. The sky was blue, the sea was calm, nothin’ better. Once back on Terra Firma, we blagged our way onto the 7.40pm coach to Manchester, watched the sun setting over the glens, and Hugh saved the day by getting an exceptionally loud Romanian guy (who sounded so much like Borat it was almost unfunny) at the back of the bus to shut the hell up so other people can sleep.

Pulling into Manchester at 1.30am, we headed pell mell for The Curry Mile – for the curry I had been desperate for since the end of December. There we met fellow nighthawks Dino, Stan and Matt Eland, who deserve a little bit of an introduction.

Dino! Dino Deasha is probably my oldest mate from school. Though no fault of our own, we got the number 68 bus together every day for seven years. Dino (along with Ben and Yoz) is responsible for getting me into good music and we’re been to more gigs together than Mick an’ Keef. We lived together in uni and both worked in the union bar. Dino was with me in Egypt when I met Mand (he tapped off with her sister, the sly dog) and he’s probably got more dirt on me than everybody else who knows me put together. If this Odyssey thing results in a modicum of fame in the UK, it’s Dino who the tabloids will want to speak to.

Stan! Another uni mate – Stan Standryt and I worked in the union bar and with his irresistible lamb-chop sideburns, I had no choice but to take him under my wing and introduce him to the world of the music festival. Together we’ve been festing it every year for the past ten, all over the UK as well as foreign adventures in Denmark, Serbia and Thailand. I guess he’s quite respectable in his day job, but at night I’m a very bad influence.

Matt Eland! I know too many people called Matt. Actually, I know a disproportionate number of people whose name beings with ‘M’, but that’s another story. Matt Eland was in the team that should have won the Liverpool 48-hour film challenge back in 2006, but lost to my effort, Day of the Jackanape. Woo..ha..ha..ha. Not being a bad loser, Matt teamed up with me in 2007 to make The Censor and a bunch of other vids. Madcap adventures and nights of craziness ensued.

And so, after a bloody tasty curry at the Al-Nawaz, the scouse contingent bundled into a shared taxi and returned to Liverpool, arriving at about 5am. I said my goodbyes to the guys and got a bit of a lump in my throat that I won’t see them again for another year. But, you know, today just went to show that when you finally make it home, it’s still there waiting for you like a pair of comfortable slippers – and in many ways it’s like you never left.

I stayed at my parent’s house and had just enough time to charge up my laptop and have a conference call with Lonely Planet before sheer fatigue rendered me incapable of doing anything but dribble and stare at the hundreds of tiny luminous stars I stuck to my old bedroom ceiling fourteen years ago in a fit of teenage abandon.

Day 308: Vans Across The World