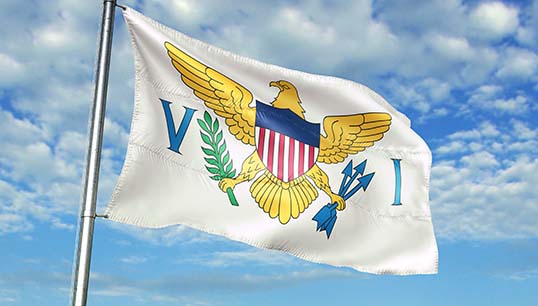 What a day. We arrived in Tortola, the main British Virgin Island, nice and early, and before long I was on a ferry (YES, A FERRY!!) heading over to St. Thomas, which is in the US Virgin Islands. On the way over, I got chatting with a British guy named Oliver. He was heading over to St. Thomas so he could renew his entry stamp to the British Virgin Islands, the joke being that as a Brit, he can only stay in the BVIs for one month, but he can stay in the USVIs for three!

Tonight on Tortola is the full moon party at Bomba’s Hut on the beach. Everyone gets wrecked on (legal) mushroom tea and then all the girls take their clothes off. At least that’s what it said in the Lonely Planet.

Oliver said I could crash at his friend’s house, so I had a plan. I would see if I could get transport to Puerto Rico or the Dominican Republic from the US Virgin Islands. If not, I would hightail it back to Tortola in the BVIs and dance the night away hallucinating my head off.

First I head to the ferry companies – any ferries running to Puerto Rico? Nope – there’s one that runs twice a month, which you can get next Saturday. Bah! So then it was a long walk to the Cruise Ship harbour and Lorna Brookes in the UK making frantic phone calls to try and get me on board a ship that was heading for the Dominican Republic. The girl at the PR company said yes. WOO!

They said there wasn’t enough time to clear security (having my eyeballs scanned and my fingerprints taken by US immigration is obviously not enough to prove I’m not Osama Bin Laden!). If the captain had checked his emails earlier, I’d be on my way to the Dominican Republic by now.

I watched the ship pull out the harbour into the setting sun and looked at my watch – 5:30pm. I checked the ferry times back to the BVIs. The last one had left…at 5:30pm.

Oh for crying out loud!

I ran as fast as my legs could carry me (and my bags) to the ferry dock. But the last ferry had indeed gone. As had my chance to go to the full moon party, as had my place to sleep for the night. I went to a bar on the harbour side, frantically couchsurfing everyone on the island. By 11pm, I’d still had no replies.

The cheapest (!) hotel was $100 a night, and it was full. I had nowhere to stay, nowhere to go. I wandered the streets for hours until I eventually found a hotel and sat in the open-air reception area. A cute American girl named Val asked what I was doing – the hotel was full. I explained my situation and she said I could sleep on one of the nearby sun lounges. I stuffed my bags under it and fell asleep, praying that all my stuff would be there in the morning. I was lying just a few metres in from the main street and there was no gate.