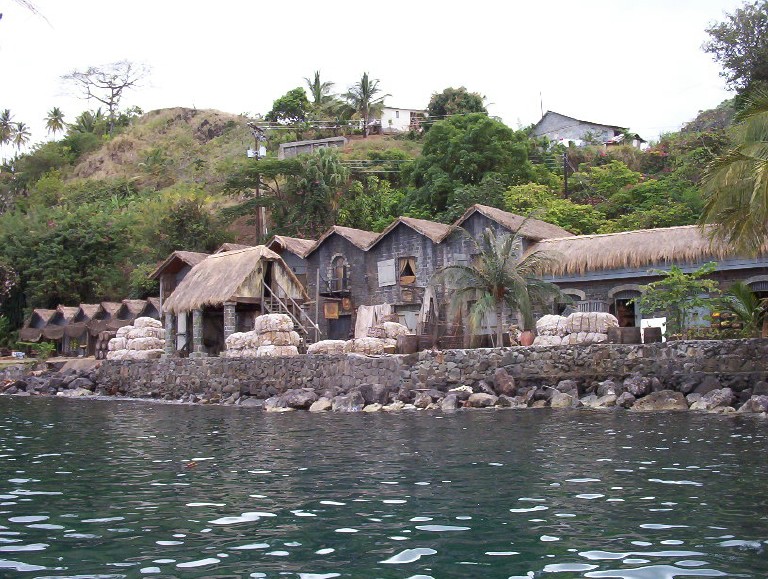 Everything closes on Sunday on St. Vincent. I tried to get to (what’s left of) the Pirates of the Caribbean set on the other side of the island. I got a minibus to town, so far so good, but then the second minibus I got was good until I got to Layou, when a bunch of people came out of a frickin’ CHURCH and told me to get off the bus, there was no room for me!

Not very Christian of them.

So I started walking to the next town. Easy! Only about five miles. Ah – five miles uphill. D’oh. Flagged down every minibus that drove past, but they were all full of church folk doing whatever church folk do. Minibuses on St. Vincent move in mysterious ways.

But then – what’s this? A car slowed down, the driver leans across… you alwight mate? You need a lift? In a lovely broad cockney accent. Cisco had been raised in London, but his parents were from St. Lucia, which is where he has called home for the last three years. As luck would have it, he was on a tour of the island as well. So we checked out the Pirates set.

I have to confess, I went a little Guybrush Threepwood. I wanna be a mighty pirate!

Grabbed a bite to eat and then went on a drive up through the rolling green hills and mountains of St. Vincent. Nice! St. Vincent is (thankfully) quite ‘undeveloped’ – this means it isn’t covered in concrete shopping malls and cinemas. This is a good thing. Although it’s hard to convince the locals of that fact. Cisco dropped me off back at my hotel and I finished off editing the Week 3 video.

About 9pm, I thought I’d go and get a bite to eat. No, sorry Graham, not on St. Vincent. Not after nine. And DEFINITELY not on a Sunday. I walked for about an hour trying to find somewhere, anywhere that had food. No such luck.

Consoled myself with the fact that some naughty-but-nice people have posted the first two episodes of Season 5 of Lost on YouTube. Nighty night!