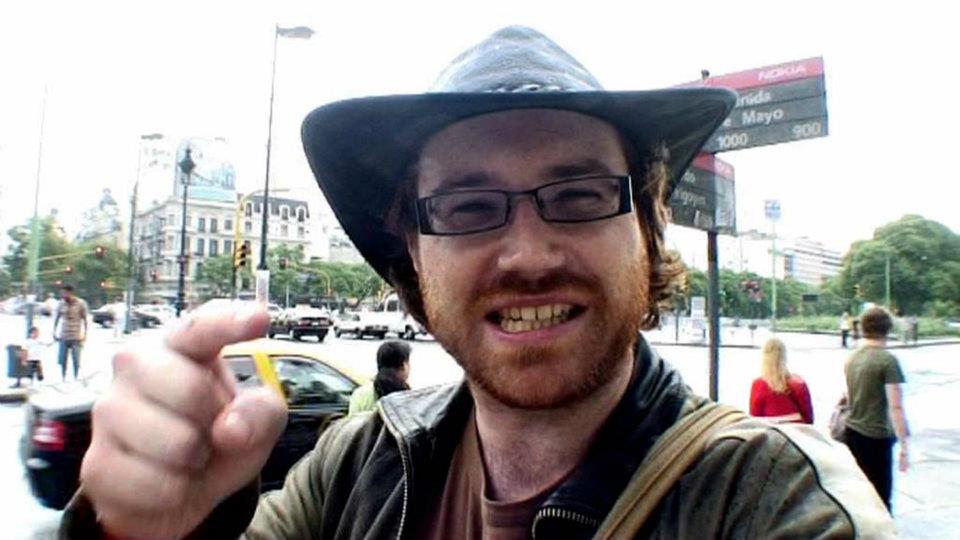 7.30am. Woke up to find that sand demons had filled my teeth with silica gel and that a brass band had barged its way into my brain and had started to bashing out the 1812 Overture at a volume that would make an Indonesian death metal band on motorcycles quiver. Maybe not the ideal start to The Odyssey Expedition. Then again, maybe the ideal start to the Odyssey wasn’t an unbelievably hectic three month run-up, a kamikaze car ride down to London, a bust video camera, a broken tooth and no confirmation (as yet) that all this nonsense is going to be made into a television show.

Add to that the last I’m going to see of my girlfriend Mandy, the love of my life, for a year. Our romantic last night – we booked a fancy hotel in London, a bottle of wine and a take out… and I fell asleep at 9pm from the sheer exhaustion of getting everything ready to travel non-stop for a year.

And let’s not forget the two-day bus journey from Rio to Buenos Aires (following the 20 hour plane journey from Heathrow via Atlanta), complicated somewhat by the fact I missed the bloody bus and had to fly to Sao Paulo in order to catch up with the damn thing!!

Yes, a hangover is JUST what I needed: but I might as well start as I mean to go on. You see, I’m not some millionaire being followed around by two Land Rovers full of medical supplies, I’m just an ordinary bod. I like getting drunk, laughing at inappropriate jokes, crashing house parties, going to gigs and festivals, stuffing my face with pizza and reading the Viz.

But rather than waste my life on the couch waiting for Lost to finish, I thought it would be a much better idea in inflict my ginger beardy mug on every country in the world. I’ve been wanting to do this for ages, but the world hasn’t been peaceful enough for it to happen… until now.

So I packed up my troubles in my old kit bag and set off on THE FIRST SURFACE JOURNEY TO EVERY COUNTRY IN THE WORLD!

The great thing about this expedition is that since nobody has ever done it before, I’m pretty much guaranteed to bag myself a Guinness World Record: I’m aiming to have to done in a year, but as long as I finish the journey sometime in the next few years I’ll still be a bona-fide record breaker. Which is good news for a slacker like me who is planning to travel the world on a shoestring.

They say that every journey begins with a first step. Mine began with a drunken stumble.

After ignoring the snooze alarm for far too long, I singularly failed to get dressed (I had slept in my clothes) and also failed to brush my teeth, spray on some deodorant or indeed splash my face with cold water – no time for that.  The boat left for Uruguay at 8.30.  I had less than half an hour and I was still in bed.

Struggling with my stupid bags – car charger for my laptop, but no wet wipes – clever!  I ventured downstairs to check out from the Milhouse backpackers, and tried to piece together the memories of the night before.

I had got into Buenos Aires the previous morning after a two-day coach journey from Rio.  It was raining, so I headed straight for the backpacker hostel.  I rang Mandy for her New Year (she’s now in her home country of Australia) and I realised that I still hadn’t got my head around the fact that I’m not going to see her for the best part of 2009.  To be honest, I still haven’t got my head around the fact that this is all happening, and it’s happening now.

After editing my first video (above), I met with Carlos, the cameraman hired by Lonely Planet to follow my first couple of days on the road.  It was about 7pm and I still hadn’t organized anything for New Year.  You see, I had assumed that Argentines see in the New Year like the rest of us – they have a party, kiss someone they shouldn’t and fall asleep around 4am after walking for hours in the freezing cold in a frantic hunt for a taxi home.

But it was not to be.  My only friend in Buenos Aires, Maia, was, like many Argentines, seeing New Year in by having a meal with her family.  Not wanted to gatecrash a family affair, I opted for the Milhouse Backpackers NYE disco which is the sort of thing that makes Lonely Planet executives spit out their lattes in disgust – young westerners having fun in foreign climes without a cultural reference in sight.  But, sod it, I wasn’t in the mood for gauchos and mate anyway.  I got to chat to a whole bunch of people, having a cameraman follow me round meant I was plyed with free drinks (you should try it!) and I got to dance like only a drunken scouser can.

Around 2am (when the night officially kicks off in Argentina) we left to meet with Maia and drop in to an authentic Argentine house party – which is a bit like a British house party, but full of people what speak funny.  Once again, it was great being the centre of attention and the weird herbal concoction I was given to drink signalled the end of my ability to string together a coherent sentence in English, never mind my appalling attempts at Spanish.

A half-remembered lift back to the backpackers – thanks Esteban! – and now here I was, less than four hours later, barging my way into the Buquebus Terminal for the ferry over to Uruguay.

Unfortunately, my plan to get the Odyssey underway was scuppered by the fact that Uruguay was, for all intents and purposes, closed.

We cut a path across the River Plate, arriving in Colonia at about 9.30am.  But upon disembarkation it became rampantly clear that starting the Odyssey in Uruguay was a silly idea.  The first bus out of the Uruguayan ferry terminal was at 11pm that night.

So a quick revision of The Odyssey route was required.  I’m going to have to overland it through Brazil later on in order to get into Guyana, so I decided the best course of action was to return to Buenos Aires and head to the border with Paraguay.  Which is what we did.  We got back on the boat and headed across the Rio Del Plata and thundered towards the start line.

Sorry I didn’t get to spend more time in Uruguay, but here’s a little vid of my time there back in 2002:

A short walk to the bus terminal and Carlos and I were on the first bus to a place called Posadas on the border of Argentina and Paraguay.  I can’t say it right, so I keep calling it ‘Potatoes’. After I tick Paraguay off the list, I’ll only have another 197 countries to visit, including the likes of Congo, Somalia, Iraq, Afghanistan and North Korea.

What have I let myself in for?!

Tune of the Day!

Day 17: What Shall We Do With A Drunken Sailor?